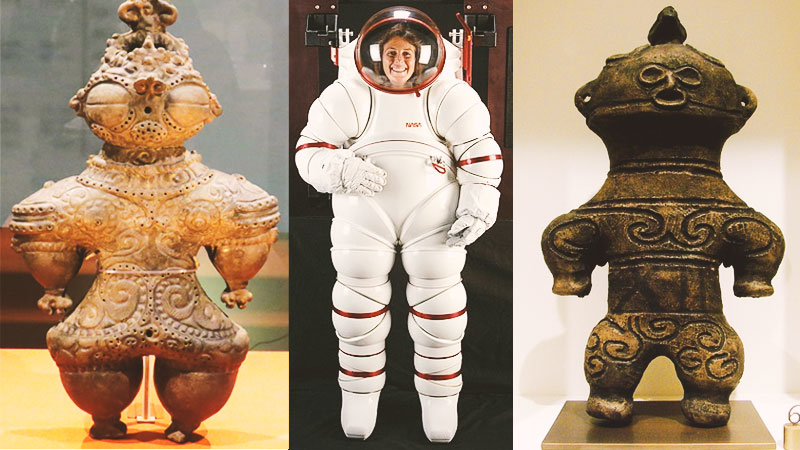 The Dogu are clay figurines with richly decorated and relatively small humanoid figures, measuring between 10 cm and 30 cm high, were made during the Jomon Period, the oldest culture in prehistoric Japan that begins around 14,000 BC extending up to 400 BC.

The Jomon people are well known for their skills with ceramics and are considered the creator of the world’s earliest forms of pottery.

The curious figurines have a series of strange features that make them some of the most original pieces of ancient art on the planet’s surface and awaken people’s imagination about their goals.

With their striking resemblance to modern spacesuits, with helmets and goggles, many believe they may represent visitors from space.

The Dogu are also depicted with elongated heads of strange shape, and some of them have almond-shaped eyes that are almost always represented disproportionately in relation to the body and others have noses above the eyes.

According to the National Museum of Japanese History, about 18,000 of these stylized figurines were found, mainly in eastern Japan. Most of them were found broken, missing an arm, a leg or other body parts and archaeologists cannot say whether this was done intentionally by its creators.

Most of the figures seem to be modeled with feminine shapes, with large eyes, thin waist and wide hips and many consider them as representations of gods and suggest links with fertility rituals, many of them also have a large abdomen associated with a pregnancy, suggesting that the Jomon considered them mother gods.

It is also believed that the Dogu were part of shamanic rituals of magic and healing, in which diseases could be transferred to the figurines that were later destroyed, eliminating the disease or other misfortune.

Another interesting fact is that the Dogu figurines are exclusive to the Jomon Period and disappeared in the following historical period, called the Yayoi Period.

Some authors believe that these figurines represent visitors from another world, extraterrestrial beings who came to Earth thousands of years ago, bringing knowledge and teachings to primitive peoples.

The mysterious costume that these figures seem to wear, with helmets and what some describe as goggles are just some of the unusual features of the art of this period.

This raises some interesting questions: Would the ancient sculptors have seen beings that resembled the Dogu or would the mysterious figures be just the result of the imagination of ancient humanity?

Given the enigmatic nature and peculiar characteristics of these figurines, the Dogu have been the subject of numerous theories considered controversial by traditional archaeologists, connecting their costumes and equipment to those of modern astronauts.

As researcher and author Erich von Däniken describes: “Equally strange is an indication I received from Japanese archaeologists. Archaeology knows the Dogu figurines; these Japanese figurines are made of stone or clay, modeled as depicting astronaut heads, with astronaut clothing and overglasses. This configuration of the Dogu figurines (there are still others) began to emerge around the year 600 BC. At that same time, the celestial gods surrendered the empire to Jimmu Tenno, first emperor of Japan. And from there at a distance of 20,000 km, in a straight line, the Prophet Ezekiel had, in 592 BC, your encounters with spaceships. Coincidence is the sophisticated term to designate the simultaneous occurrence of two matching events. I like the term!”

The flying carpet is an ancient legendary object used as a means of air transport.