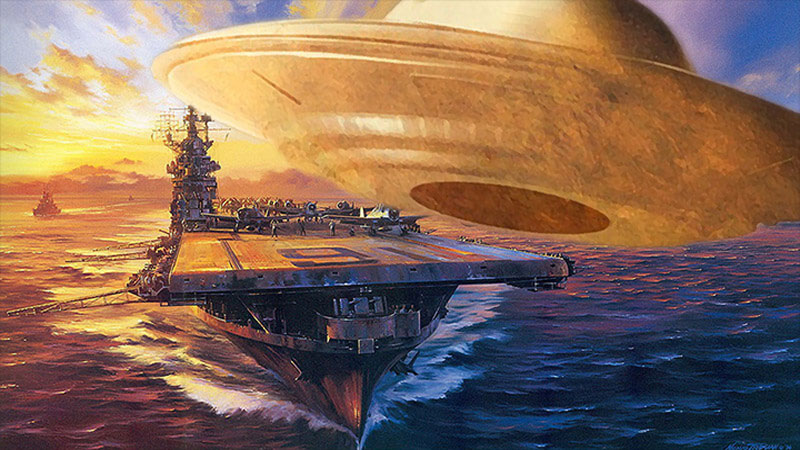 Approximately 80,000 men aboard 1,000 planes and 200 ships participated in a show of force to demonstrate NATO’s effectiveness in the event of the Soviet Union attacking Western Europe.

This operation caught the attention of everyone in the neighborhood and apparently not all were human.

The first two incidents occurred during the first day of demonstrations. Personnel aboard several ships in the Atlantic reported a large, blue and green, triangle-shaped UFO flying low at a speed of approximately 2,300 km/h.

Shortly thereafter, three UFOs were seen flying in a triangular formation at a similar speed. They left a visible trail in the form of “white light”.

On September 19, 1952, Royal Air Force personnel stationed at RAF Topcliffe in England also spotted a UFO as one of their planes was entering to land. Several radar operators spotted the silver circular object performing impossible maneuvers and accelerated incredibly fast.

Lieutenant John Kilburn recalled: “Suddenly it accelerated at an incredible speed towards the west turning in a southeast direction before disappearing. All this occurred in a matter of fifteen to twenty seconds. The object’s movements were not identifiable with anything I saw in the air and the acceleration rate was unbelievable.“

The next sighting occurred the next day and a photographer was present, but unfortunately, the photos he took were never declassified.

The flagship of Operation Mainbrace was the USS Franklin D. Roosevelt, a 45,000-ton intermediate-class aircraft carrier. Aboard the USS FDR was press photographer Wallace Litwin and while taking pictures of aircraft, another circular object appeared above the fleet. He managed to take three pictures of the UFO while doing some impressive maneuvers. The color photographs were examined by Navy Intelligence officers, but the results were never made available to the public.

During their investigations, Captain Edwin J. Ruppelt, the director of the Blue Book Project, showed the photos, stating that “they turned out to be excellent, judging by the size of the object in each successive photo, you can see that it was moving quickly.”

On the same day, three Danish Air Force officers noticed that a disc-shaped object passed over head and disappeared on the horizon.

On September 21, six British pilots flying in formation over the North Sea observed a bright spherical object rising from the water and approaching its location. The pilots went out in pursuit, but the UFO quickly disappeared from their sight. On the way back to the base, one of the pilots noticed that the object re-followed them. He turned to chase him, but once again, it accelerated.

At the same time, RAF Sandwich in Kent, England, went on alert, where all radar operators were looking at their screens in disbelief, their instruments had detected a huge unidentified object the size of a warship, hovering at a high altitude over the English Channel.

Rumors say that General Dwight Eisenhower was aboard the FDR during the operation, which would mean that he was exposed to the UFO phenomenon before becoming president of the United States and allegedly entering into an agreement with extraterrestrial entities.

Most UFO researchers agree with the cause of these multiple sightings. The great gathering of forces attracted the attention of extraterrestrials, which serves to strengthen the belief that we are being observed.

All available documentation on this matter circulated between the US Navy and Air Force Intelligence, the RAF and NATO. Little information has been released and, to date, sightings remain unexplained.

Dogons and Nommos: The African Tribe and the Visitors from Sirius

All around the world there are cultures and rituals that show so much knowledge that raise questions that still need many answers.