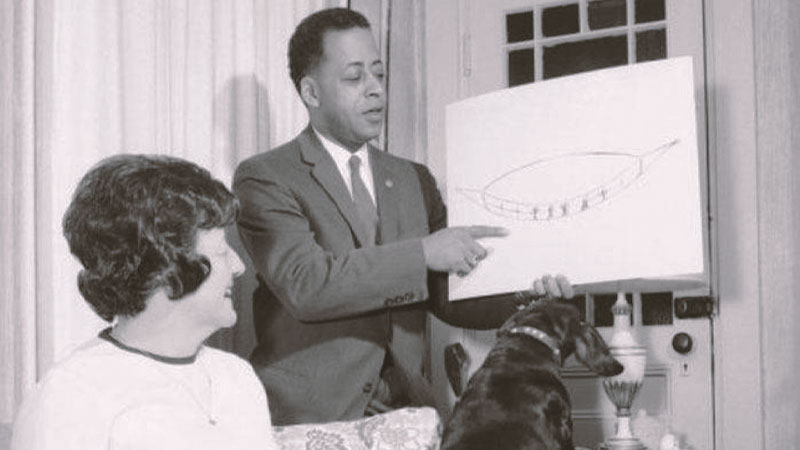 On the evening of September 19, 1961, Barney and Betty Hill, along with their dog Delsey, were returning to their Portsmouth, New Hampshire, home after a short vacation to Niagara Falls. They were traveling on Highway 3, just south of Lancaster, when they saw a bright light in the sky.

Betty, who was in the passenger seat, watched the light move lower into the sky. At first, Barney thought it was probably an airplane, but Betty, who had heard of unidentified flying objects (UFOs), was sure she was looking at a flying saucer.

The Hills stopped to get a closer look at the object and let Delsey out for a short walk. Barney remained curious, but just a little frightened. He got out of the car and used his binoculars, but still could not figure out what he was looking at.

At one point, he approached the object and could see several occupants inside, which scared him so badly he ran quickly back to the car to join Betty where she was waiting for him.

The couple then heard buzzing sounds and felt tingling sensations throughout their bodies, but ultimately, they drove home, where they went straight to bed exhausted and they did not wake up until late the following afternoon. Then they then realized the four-hour trip home from Niagara Falls had taken them seven hours.

Betty noticed the dress she was wearing was torn in several places and had a pinkish powder on it. The powder was later examined by five different laboratories, but none of them could identify the substance.

The Barney’s good dress shoes were scuffed to the point he could no longer wear them. The binoculars strap was broken and looked like it had been cut. Both Barney and Betty were wearing watches at the time of their unusual encounter and both watches quit working and never worked again. Shiny, concentric circles appeared on the trunk of the car that seemed to have some sort of magnetic connection, as a compass test indicated an odd reaction when placed near the circles.d a strange reaction from a compass after it was placed near the circles.

As Betty and Barney each recalled the incident, they became convinced they had been abducted by extraterrestrials.

The Betty and Barney Hill abduction story was the first of its kind, but certainly not the last, and although the incident happened more than 50 years ago, it is still being discussed and analyzed today.

Barney would have preferred to just keep the experience quiet and between the two of them, fearing that he and Betty would be viewed as “eccentric”, but at her sister’s urging, Betty called the nearby Pease Air Force base to report the incident on September 21.

Major Paul Henderson visited them in person and wrote a report of the interview dated September 26, 1961. It’s unclear whether or not Henderson viewed the Hills as credible; a National Investigations Committee on Aerial Phenomena (NICAP) report concludes that there was “insufficient data in the Air Force files”.

The Hypnosis of Barney and Betty Hill

Dr. Simon held sessions with the two for a period of six months, beginning in early 1964. Initially, at the end of each session, he would induce amnesia so they would not talk to each other about what they remembered.

Barney recalled that, at one point, he got out of his car with the .45 military issue weapon that he once used in the Army and fired at the UFO, but soon became overwhelmed by the aliens. They took him and his wife onto the spacecraft, where he recalled a red-headed being greeting him along with a number of people who did not appear human, but he thought they were speaking German.

Barney described his experience, beginning with a description of the aliens’ uniforms. He said that they wore peaked caps and a uniform with silver piping.

Barney said that the red-headed spoke English, but also communicated silently in a way that Barney could understand the message. Betty gave this same report about communication.

Both Barney and Betty reported that the extraterrestrials conducted medical experiments on them and they took samples of the Hills’ blood, bodily fluids and hair. Betty added that they also scraped her skin for sampling.

Despite undergoing separate hypnosis sessions, Betty and Barney reported similar experiences. Most of Betty’s memories she recalled while under hypnosis matched what she had written about her dreams of the event. Betty also drew a map of the stars and the UFO she recalled seeing that night.

The experts analyzed the sketches and determined that the star map corresponded to Zeta Reticuli, a binary star system 39 light-years away from Earth and the home base of the aliens she and Barney encountered, now commonly associated with the extraterrestrial “Greys”.

An interesting detail is that the star map drawn by Betty contained more stars in the region of the Constellation of Reticulum than was known at the time and that were only discovered more recently by the Hubble Space Telescope.

The NICAP investigator, who interviewed them shortly after the incident, said he was “impressed by their intelligence, apparent honesty, and obvious desire to get at the facts and to underplay the more sensational aspects of the sighting. Neither witness had read any books on the UFO subject before the sighting. Mr. Hill, especially, had been a complete UFO skeptic before the experience and he still detests the term ‘flying saucer’”.

The investigator concluded that the Hills were speaking the truth. Except for a few minor details, such as the size of the object and the number and description of the occupants, he believed that the encounter occurred exactly as they described it.

The Hills spoke to their church members about their experience, but they did not seek out nor did they desire publicity, which only came after the story was published in “The Boston Globe” in 1964.

The Hills, along with their psychotherapist, eventually cooperated with author John G. Fuller who published a book in 1966 about the abduction, titled “The Interrupted Journey”.

A second book, titled “Captured! The Betty and Barney Hill UFO Experience”, was written by Betty’s niece, Kathleen Marden, who studied all of the historical records as well as the hypnosis session notes.

The story of the abduction of Barney and Betty Hill has stood the test of time and still remains unexplained and intriguing UFO enthusiasts to this day.