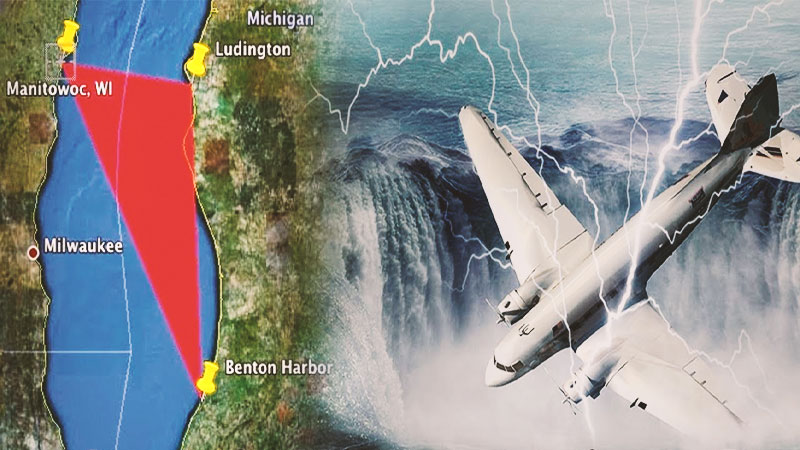 In addition to the famous Bermuda Triangle, few areas in the world are considered bizarre as the Lake Michigan Triangle, although it is little known worldwide, its history is full of haunting and unexplained events.

Michigan is a state in the northern United States that borders Canada in the Great Lakes region of North America, which has more than 11,000 internal lakes. The Lake Michigan Triangle has its points to the west at Manitowoc, Wisconsin, east on Ludington and south on Benton Harbor, both in Michigan.

As the legends of the strange incidents that took place at the site grew, strange accounts, claiming a variety of unexplained occurrences that occurred while passing through the area, began to emerge.

Some have claimed that the Lake Michigan Triangle would be a dimensional portal that can double time with a “metaphysical force” creating a vortex of energy. Others claimed that UFOs were often seen in the area, or reported on bright lights in the sky.

Over the years, frightening personal accounts reinforced the legend, and soon many were writing about strange weather phenomena, or even about feelings of a great malaise while navigating within this range of the lake.

The Triangle of Lake Michigan had its first historical record dated 1891, when the schooner Thomas Hume set sail to fetch wood. Strong winds began and, during the night, the boat and its crew with seven men completely disappeared. Search groups could not find any trace of the schooner or his sailors.

Since then, more than a century has passed and strange events have continued to take place at regular intervals.

In 1921, the ship Rose Belle was found, floating overturned, on Lake Michigan, but all of its eleven passengers, members of the House of David of Benton Harbor, had disappeared.

Although the ship appeared to have been damaged in a collision, there were no reports of any other ship involved in the accident or any remains that could have been found.

Many people found this frightening, as the Rose Belle ship had been rebuilt after another shipwreck a few years earlier.

The Disappearance of Captain Donner

On April 28, 1937, near midnight, Captain George R. Donner went to his cabin to rest after guiding his ship through the icy waters of Lake Michigan, and about three hours later, a crew member went to warn him that they were approaching the harbor.

The captain did not answer and the door was locked from the inside, so the sailor decided to break it down only to find the cabin empty, the captain had simply disappeared.

The search has revealed no leads and Captain Donner’s disappearance remains unsolved to this day.

The Disappearance of Flight 2501

Another intriguing case about the Lake Michigan Triangle occurred in 1950, when Northwest Airlines Flight 2501 carrying 55 passengers and three crew members on board disappeared into Lake Michigan.

The pilot had just requested permission to descend to 2,500 feet above sea level because of a severe electrical storm over the lake when the plane disappeared from radar and lost communication with the tower.

To date, no wreckage of the plane has been found and the cause of the crash remains unknown.

About two hours after the last communication with Flight 2501, two police officers reported sighting a strange red light hovering over Lake Michigan that disappeared after 10 minutes, leading some to believe that a UFO could be responsible for its disappearance from the plane.

In a surprisingly unreported story from 2007, Mark Holley, professor of underwater archaeology at Northwestern Michigan College, discovered a series of stones arranged in a circle similar to stonehenge’s 12 feet deep in the waters of Lake Michigan.

A stone outside the circle appears to have sculptures that resemble a mastodon, an elephant-like animal, but which was extinct about 10,000 years ago at the end of the last Ice Age.

“When you see him in the water, you’re tempted to say, ‘This is absolutely real.’ What we need is for experts to come and check,” Holley told reporters at the time.

While many people refuse to sail the waters of the Lake Michigan Triangle and consider it dangerous, others see no problem with facing the journey, such as Captain Kevin Fitch of Badger Ferry, who sailed the waters of Lake Michigan for about thirty years, and according to him, on his more than 1,000 trips across the lake, there was no incident or anything strange that did not have an explanation.

A former U.S. military official details information about extraterrestrials, time machines and the Orion Cube, an alien device capable of showing events that will occur in the future.