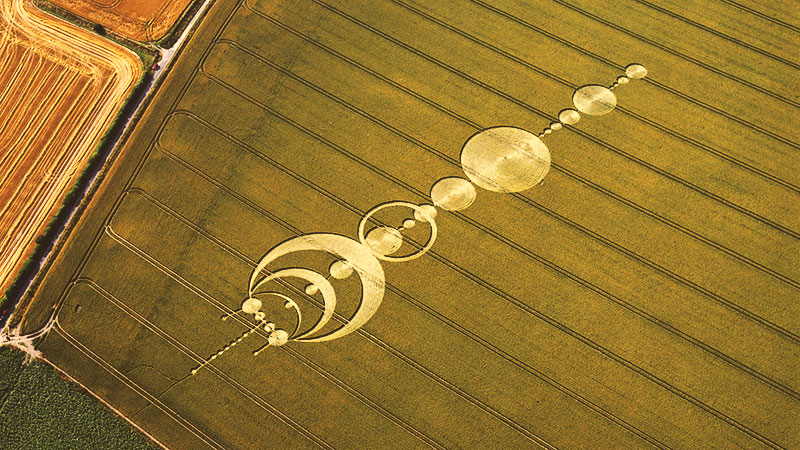 Many consider crop circles to have been created by extraterrestrials who yearn to subtly communicate with our species; others view them as an agricultural and technologically artistic phenomenon and believe the alien connection may be a hoax, but the history and mystery surrounding crop circles has been around since the mid-1600s.

The first crop circle to be recorded dates back to 1678, with a woodcut illustrating a circle being cut from an oat field. The woodcut refers to a legend known as the “Devil’s Mowing,” feeding into the myth that circle crops are the work of otherworldly and darker influences. The connection can be made with the scythe, a common agricultural tool that might symbolize the end, or death, of an agrarian cycle.

In 1966, a crop circle was discovered in Tully, Australia that is one of the first to be connected to UFOs. The farmer who found the patterns reported seeing a “flying saucer” rising out of the area, creating what the media referred to as “flying saucer” nests.

More circles began appearing in the United Kingdom in the 1970s with most congregating in the Wiltshire area, the same region as many other ancient monuments. One in particular, discovered in 1996 across from the legendary Stonehenge had a design known as the “Julia Set,” a very complicated fractal configuration that led many to believe it was created by extraterrestrials, sending a message through sacred geometry such as the Celtic Cross, triskelion, and other intricate shapes that dot the land in more than 60 countries.

Researchers believe there are certain years in which crop circles appear more frequently and perhaps with more urgency. The tetrahedron pictogram, which appeared at the location of the Barbury Castle in 1991, made many wonder if these creations were more than meteorological phenomenon.

Some took them as elaborate hoaxes by very talented tractor drivers; others saw ancient, hermetic messages in the designs, signifying the holy trinity and the realm of the divine.

As much attention as the Barbury Castle crop circle gained, which garnered the most attention from the world in 2001. The six-armed 490 wheeled circle, more than 800 feet in diameter discovered in Milk Hill, England became an overnight sensation. For weeks, helicopters hovered above it, and the result was the fact that the mystery surrounding crop circles could no longer be ignored.

There exists a line drawn in the world of crop circles. Those who adhere to them being manmade and those who hold to the patterns being the work of extraterrestrials.

For the hoaxers side of the argument, the areas the crop circles appear in are often nestled in remote, wide expanses of land, which would make it fairly easy to arrive in the middle of the night with little or no notice.

For those who believe the circles were made by aliens, the methods by which they were created range from lasers, to advanced lightwave technology, to spacecraft, or even psychic energy.

In an effort to decode crop circles, several research groups have emerged.

Dr. Horace Drew, a well-regarded molecular biologist from the Caltech (California Institute of Technology), led these investigations and provided crop circle decoding that concludes the patterns contain important messages from other species.

While Dr. Drew does agree that many crop circles are human-made, he also states that those created by extraterrestrials contain an “advanced binary code,” either in the form of simple greetings, or as a means of communication with future civilizations.

Some of the messages Dr. Drew decoded include such sayings as “believe,” “there is good out there,” “beware the bearers of false gifts and broken promises,” and “we oppose deception,” all leading us to believe that the alien communication is intended for us to live our best lives.

The Chilbolton crop circle discovered in 2001, contains binary code of the numbers zero to ten, atomic numbers that make up human DNA, a strange face, the solar system, and other human-related symbols.

In addition to studying the visual messages that are within crop circles, there is a body of sound and light vibration research that has emerged around the patterns.

In the 1960s, Gerald Hawkins, from Boston University School of Astronomy, applied crop circle geometry to the Boethian musical scale, and with it a way of creating music, adding the accepted belief of the relationship between geometry and sound.

More recent research by quantum physicists is revealing a wide range of electromagnetic frequency fields ranging from 260 MHz to 5.2 KHz that link the geometric patterning.

Using image-to-sound mapping technology, interesting correlations have been found between the Milk Hill crop circle and sounds emitted by other planets at electromagnetic spectrum frequencies, which were recorded by NASA’s Cassini space probe.

Regardless of the doubters and the controversies surrounding them, the Crop Circles are not going away, in fact, new ones are “cropping up” every month all around the world.

A substantial tourist industry has developed around the circles, with thousands of visitors from around the globe gathering to witness them firsthand.

Some visit out of curiosity and some to experience the healing messages the circles are believed to contain.