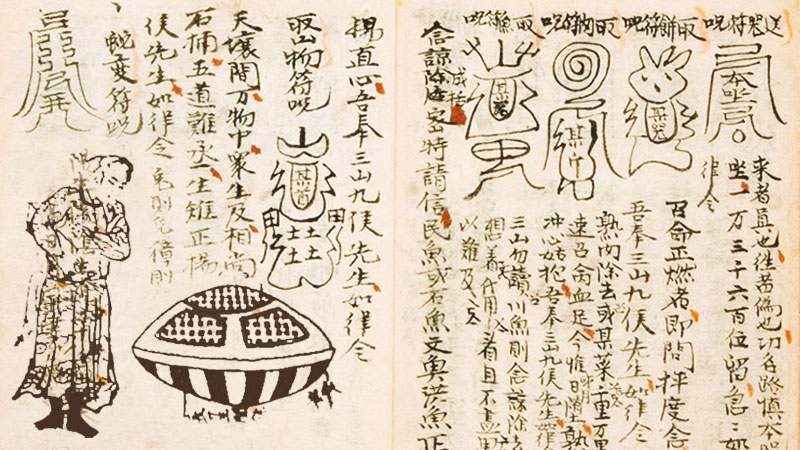 While Chinese historians checked ancient manuscripts from the library of China’s Ministry of Culture, they came across an intriguing 16th-century description of contacts with extraterrestrial beings.

The text was written in 1528 and belongs to a collection of more than 500 manuscripts depicting everyday events from the Ming Dynasty period, which ruled China from 1368 to 1644, and contains information on medicine, music, martial arts and other historical events, such as this incredible account of a mysterious “star” who crossed the sky from east to west and descended near a small village near the mountains.

One of the villagers, intrigued by the mysterious star that fell, went to the crash site and approached the object that was described as having the shape of a disc the size of a house and covered in bright colors, very different from anything he had ever seen in his life and, after witnessing this such extraordinary phenomenon, the man fainted.

The villager awoke in a cold and strange place, illuminated by red lights and, looking around him, came across round-faced creatures with three eyes, who wore strange clothes and spoke a language he did not understand and, frightened, fainted again.

This time, after he regained consciousness, he found himself in his own home and, with no idea how long had passed, discovered that he had been absent from his village for a whole year.

The author of the manuscript claims to have visited the villager who personally told this incredible story and showed him a red scar on his chest, which was not there before his disappearance.

In his autobiography entitled “Empty Cloud” he wrote:

“At the end of the great prayer meeting, I climbed Mount Lushan, where I bowed to the ‘lights of wisdom’ that appear there.

The first night I couldn’t see anything, but on the second night I saw a large sphere of light flying from the north to The Central Peak. Then it went down and, after a moment, split into more than ten spheres of different sizes.