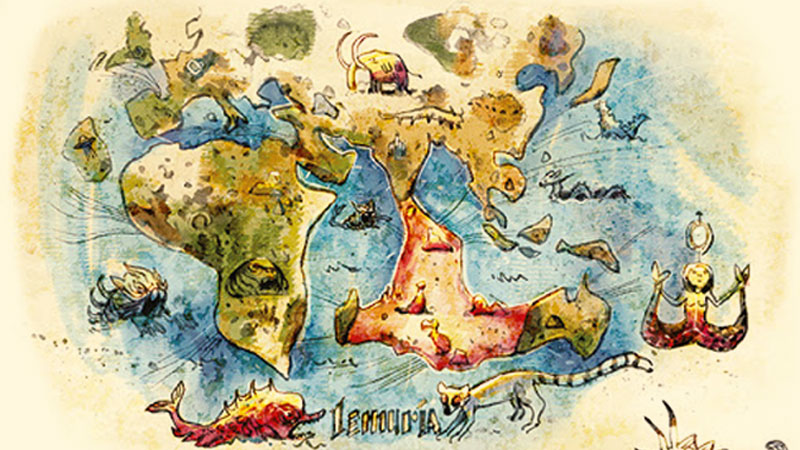 It is common to think that it is necessary for a region to be on the surface to be considered a continent, but there are numerous studies that have proven that there are submerged continents on Earth.

Recently, scientists have made an incredible discovery east of Australia: a continent of about 5 million square kilometers that has been hidden at the bottom of the ocean for thousands of years and only a small part of its highest points is visible in the form of islands.

It is believed that this lost continent may have been home to an ancient civilization known as the Lemurians, and just like Atlantis, this ancient land disappeared under mysterious circumstances and was forgotten by mankind tens of thousands of years ago.

The recent history of Lemuria began in 1864, when zoologist Philip Sclater published an article entitled “The Mammals of Madagascar” on the classification of animal species discovered on the island of Madagascar.

In this article, Sclater mentioned that fossils of lemurs, a species of small primates, were extremely abundant in Madagascar and India, but curiously, they were not found in Africa and the Middle East.

This observation led Sclater to propose that, during a point in the distant past, India and Madagascar were connected by land and were part of a wider continent called Lemuria. This statement later led to the discovery that, in the very distant past, all continents were united in a supercontinent, Pangaea.

According to the researchers, the Lemurian continent separated from the supercontinent at some point during the Mesozoic era, approximately 200 million years ago.

According to India’s National Institute of Oceanography, sea levels were around 100 meters lower about 15,000 years ago, and this resulted in a ‘super flood’ that eventually led to the disappearance not only of an entire continent, but of entire civilizations that existed on Earth in the distant past.

There are different and varied accounts that have been written about the Lemurian race that describe them as a highly spiritual society and are believed to have achieved unprecedented social and religious supremacy, leading their society to an era of modernism and indescribable peace.

They shared the planet with another ancestral race: the Atlantes.

Both civilizations would have coexisted and developed in parallel, but not peacefully. According to legend, the atlantes were technologically developed, but known to be greedy beings, and their desire for power led to conflicts that would have ended with the sinking of both continents in the ocean, leaving only a few survivors who spread around the world in search of shelter.

Mount Shasta is a volcanic mountain with more than 4 km of altitude, located in California, and has been the subject of a large number of myths and legends. It is often said that this mountain hides a secret city beneath its peaks. In some stories, the city is no longer inhabited, while in others it is inhabited by a technologically advanced society of humans or mythical creatures.

According to the local indigenous tribes, especially the Klamath people, Mount Shasta is inhabited by spiritual chief Skell, who descended from heaven to the summit of the mountain and fought with the “Spirit of the Underworld.”

In 1899, Frederick Spencer Oliver published a book stating that the Lemurians still lived on the planet, specifically on Mount Shasta. In his book, Oliver makes detailed descriptions of this ancestral society that inhabits an underground city called Telos, connected to the surface by a series of tunnels, and occasionally its inhabitants can be seen walking across the surface wearing white robes.

In 1904, British researcher J.C. Brown claimed to have found an underground city on the mountain while prospecting gold for a mining company in England. According to his account, the city was overa network of 17 kilometers of tunnels and caves and was filled with gold and mummies up to 3 meters high.

A team of 80 people was organized to explore the mountain and confirm what Brown had seen. Everything was ready for the expedition, but on the morning of the day marked J.C. Brown mysteriously disappeared without a trace and was never seen again. The fascinating underground city he described with such enthusiasm was never found.

In 1930, mine engineer Guy Ballard lives near Mount Shasta and, in his books, published a series of accounts of encounters with mysterious beings who identified themselves as “Ascended Masters”, spiritually enlightened beings who in past incarnations were ordinary humans, but who went through a series of spiritual transformations and evolutions.

To give more credibility to the history of the Lemurians, in 1931, the occultist and mystic Harvey Spencer Lewis, founder of the Rosicrucian Order, published a book that spoke of the Lemurian civilization hidden on Mount Shasta, and due to the great scope that his book obtained, this is considered the main reason why the legend of the Lemurians is widely known to this day.