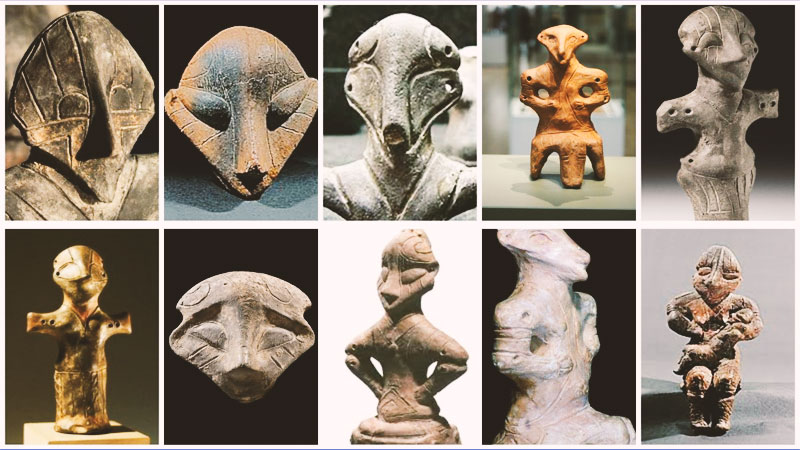 Discovered in 1908 near Belgrade, Serbia, the more than 2,000 mysterious figures belonging to the ancient Vinca culture, which began to develop around 9,000 years ago in the Balkan region and northern Greece, continue to intrigue archaeologists and researchers.

Numerous archaeologists who have studied this enigmatic civilization do not have a convincing explanation for this anachronistic culture that was highly evolved for a time when most cultures were still in the Neolithic stage.

In addition to the figurines, paintings and ceramics were also found that depict human figures, animals and some strange humanoid beings, and many of them contain inscriptions that have not yet been translated, which makes the figures of the Vinca culture original and unique items.

The human groups that inhabited the Vinca region received, almost spontaneously, a significant boost that helped them to become a civilized society, allowing them to develop a syllabic-alphabetic language and a rudimentary writing system.

Interestingly, in the civilizations of Southeast Europe there are no previous stages in the evolution of the writing system, it appeared suddenly and in a relatively evolved form.

All of this took place thousands of years before the rise of the great civilizations of Mesopotamia and Egypt and, according to most researchers, is considered an archaeological anomaly.

Some researchers suggest that the Vinca culture depicted extraterrestrial visitors, gods who came from the sky and aided in the advancement of civilization and human technology.

Although the Vinca culture had contact with other neighboring cultures, their art remained different from the other cultures in the region.

The most distinctive feature of these mysterious figures, which have been dated to between 5,700 BC and 4,500 BC, are triangular faces, large almond-shaped eyes, absence of mouths and noses, and often appear covered by some kind of helmet or mask. Some of these figures seem to depict hybrid beings, half human and half reptile.

In almost all ancient cultures, ancient texts speak of highly advanced beings who descended from the heavens and participated in the formation of civilization as we know it today.