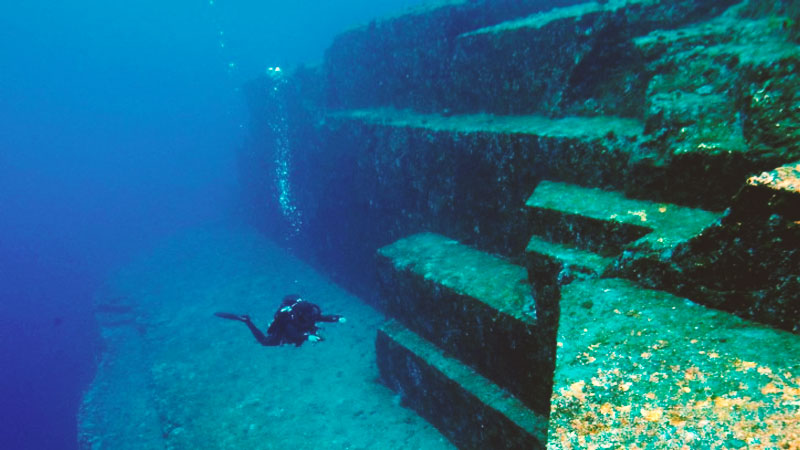 The sea of the Japanese island of Yonaguni is a popular diving site during the winter months due to its large population of hammerhead sharks. In 1986, while looking for a good place to watch sharks, Kihachiro Aratake, director of the Yonaguni-Cho Tourism Association, observed some formations on the seabed that resembled architectural structures.

Shortly thereafter, a group of scientists led by Professor and PhD Masaaki Kimura of Ryukyus University visited the formations. As teams of specialist divers spread off the southern coast of Okinawa using grid search patterns, they found five submerged archaeological sites near three islands. Locations range in depths from 5 to just 30 meters below sea level.

The process revealed many startling discoveries, including what appears to be a massive arch or portal of huge blocks of stone that seemed to fit perfectly, right-angle dwellers, carvings and what appeared to be stairs, paved and crossroads streets, and large staircases leading to squares surrounded by pairs of tall features resembling poles.

Its main structure was called the “Yonaguni Monument”, superficially it has the appearance similar to a platform or a pyramid of steps. It has been compared to various pyramidal structures and temples in the Americas, such as the ancient “Temple of the Sun” in Machu Picchu, Peru.

Dr. Kimura refers to the Yonaguni Monument and its related structures as being “terraformed”, that is, natural geological resources that have been manipulated or modified by human hands.

The Yonaguni Monument is more than 50 meters long in the east-west direction and more than 20 meters wide in the north-south direction. Its top is about 5 meters below sea level, while the base is approximately 25 meters below the surface. It is an asymmetric structure with what appear to be titanic stone steps exposed on its south face. These steps range from less than one meter to several meters high.

When viewing the photographs of the Yonaguni Monument, many people have the immediate impression, due to the regularity of the stone faces of the steps and the acute angles made by the rock, which is an artificial structure, created by some unknown ancient civilization.

Kimura estimated that the monument should date from 8,000 BC, a period when it would be above water and therefore assumed that the site could be a remnant of mythical lost continent of Mu.

Many scholars refused to accept that the ruins are of human-made buildings. Geometric shapes, very certain angles, were attributed to “natural agents”. Geologist Robert Schoch of Boston University is one of the scientists who believes the structures were formed naturally, recognizing that they may have been used or modified by humans in the past. He points to the fact that the site is in a region subject to earthquakes and that earthquakes tend to fracture rocks on a regular basis.

However, other researchers claim that the bottom of the Yonaguni Sea is the tomb of a prosperous civilization possibly much older than Sumeria.

Proponents of artificial origin, such as researcher Graham Hancock, also argue that while many of the features seen in Yonaguni are also seen in natural sandstone formations around the world, it is highly unlikely to concentrate so many peculiar formations in such a small area. It also points to the relative absence of loose blocks in the flat areas of the formation, which would be expected if they were formed only by natural erosion and fracturing.

On May 4, 1998 an earthquake struck part of the Yonaguni Island and Ruins, the quake revealed new structures similar to the ziggurats of Mesopotamia. Marks were found on the stones that show the work done on them, including notches. Tools and a small staircase were also found. The hypothesis of natural formation in Yonaguni became, then, implausible.

Until 6,000 years ago, the ruins were eerland, linked to the continent. The rise of sea levels over the years has submerged territories such as those off the coast of Yonaguni. Geological studies calculated the age of these monuments as being 11,000 years old, which would place them as one of the oldest buildings on the planet.

Hancock draws parallels between Yonaguni and other submerged ruins found under the waters of Lake Titicaca and in Dwarka, on the coast of India, which offer further evidence of the existence of a vast underwater world containing structures dating back to the early days of mankind and states: “It was the submerged structures of Japan that first awakened me to the possibility that an underworld in history , not recognized by archaeologists, could be hidden and forgotten beneath the sea.”

Researchers continue to investigate these unique and disconcerting underwater worlds with regard to how they relate to our ancient past and to unravel the mysteries surrounding their true origins.