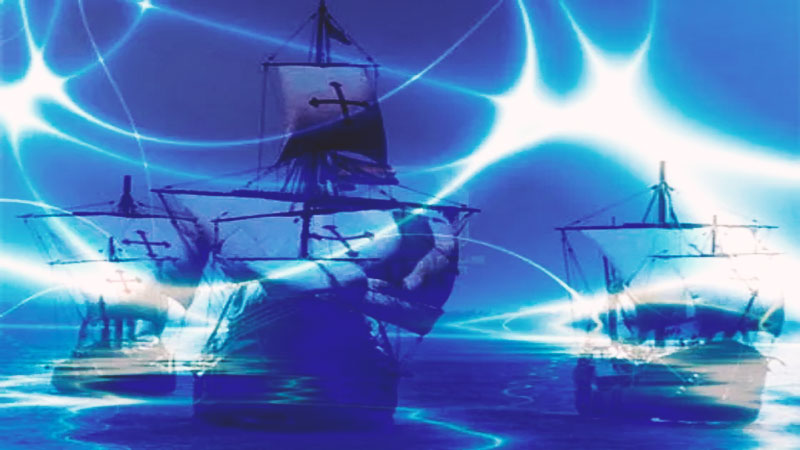 As he crossed the Atlantic Ocean, believing he was heading towards the Indies, Christopher Columbus recorded in his logbook a rather objective account of the strange lights he saw in the sky during the voyage.

The first reference to the strange apparitions in heaven near the American continent occurred on September 15, 1492, when Columbus wrote:

“That day and night they made 27 leagues and rather more on their west course ; and in the early part of the night there fell from heaven into the sea a marvellous flame of fire, at a distance of about 4 or 5 leagues from them.”

Many claim that this may be the indictment of a UFO that went down and hid in the sea.

On October 11, 1492, shortly before he first sighted land, Columbus noted:

“After sunset the Admiral returned to his origin west course, and they went along at the rate of 12 miles an hour. Up to two hours after midnight they had gone 90 miles, equal to 22 leagues. As the caravel Pinta was a better sailer, and went ahead of the Admiral, she found the land, and made the signals ordered by the Admiral. The land was first seen by a sailor named Rodrigo de Trianal, but the Admiral, at ten in the previous night, being on the castle of the poop, saw a light, though it was so uncertain that he could not affirm it was land. He called Pero Gutierrez, a gentleman of the King’s bedchamber, and said that there seemed to be a light, and that he should look at it. He did so, and saw it. The Admiral said the same to Rodrigo Sanchez of Segovia, whom the King and Queen had sent with the fleet as inspector, but he could see nothing, because he was not in a place whence anything could be seen. After the Admiral had spoken he saw the light once or twice, and it was like a wax candle rising and falling. It seemed to few to be an indication of land; but the Admiral made certain that land was close.”

Although for some the mention of Columbus on the “wax candle rising and falling” would be a bonfire on land, for others, such as the noted researcher J. J. Benítez, the possibility of spotting a bonfire, taking into account the distance they were in, was null and void.

According to the studies of Manuel Audije, when Columbus and other men saw the strange light, they were about 80 kilometers from the coast, concluding that this distance is excessive to distinguish a campfire on land.

Therefore, many researchers claim that Columbus spotted lights that were considered UFOs, which would be witnessing, or perhaps guiding, the discovery of America.

Christopher Columbus left everything in writing in his diary, including sightings of supposed mermaids at sea off the coast of Florida, situated near the River of Gold, and stated that they were not as beautiful as the legends told, and even some had a more masculine than feminine face.