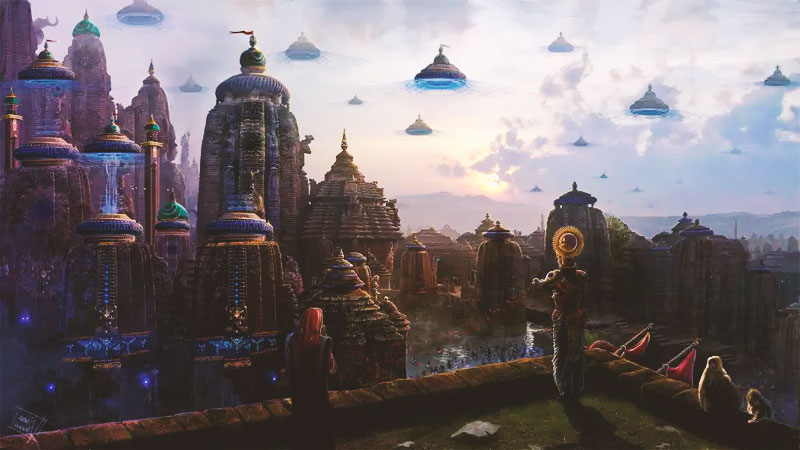 In ancient times, it was universally stated that the human species was a gift from the celestial gods.

Whether in Egypt, Mesopotamia, Israel, Greece, Scandinavia, Britain, India, China, Africa, America or anywhere else in the world, most people believed that the gods brought them the tools of civilization: agriculture, writing, mathematics, medicine, and metallurgy.

The famous Hindu epic poem Mahabharata dates back to the year 4,000 BC and speaks of the Vimanas, the fantastic flying machines used by the gods, also called “chariots of the gods”, these vehicles are described in great detail, implying that they would have been witnessed by the scribes of India and documented for others to understand.

The word Vimana is of Sanskrit origin and has several meanings, from “palace of an emperor or god” to “vehicle”.

As we read these texts with contemporary understanding of technology, we can see how the ancient Hindus were describing UFOs and airplanes in the primitive terms they understood: “flying carriages carrying the gods” would be a good description of the flying saucers used by advanced alien beings (the celestial gods) who traveled great distances through the skies.

The Mahabharata is just one of many Vedas, the collections of Hindu sacred texts in Sanskrit that describe these carriages in detail:

“Powered by lightning wings, the carriage flew in the air to the solar and stellar regions. They roar as they go towards the sky.”

In another passage from the Mahabharata on the “Celestial Battle of Kurukshetra”, fought between the Kauravas and Pandavas clans, we find these words, which suggest not only flying machines, but also the use of nuclear weapons:

“Gurkha, flying in his fast and powerful Vimana, fired a single projectile loaded with all the force of the Universe against the three cities of the Vrishis and the Andhakas. An incandescent column of smoke and fire, as bright as thousands of suns, rose in its explendor. It was the unknown weapon, the Iron Thunder, a gigantic messenger of death who reduced the entire race of the Vrishnis and Andhakas to the ashes.”

According to these texts, the propulsion of the Vimanas was carried out with mercury, combined with vibratory techniques of certain sounds capable of releasing powerful energies.

The Vimanas would be so advanced that they could travel in space, travel underwater and fly into the Earth’s atmosphere safely.

According to a study by researchers at the Indian Institute of Science in Bangalore, Professor Shivkar Bapuji Talpade, a scholar of the Vedas and Sanskrit literature, based on descriptions of the ancient texts, would have built the first functional aircraft in 1895, baptizing it from Marutsakha, meaning “Friend of the Wind” and, according to the account of his student Shripad Damodar Satwalekar, the unmanned aircraft would have sustained flight for a few minutes, reaching 1,500 feet of altitude before falling.

The Mechanical Bird of Ravana

The Ramayana is a Vedic epic dating from the 5th century BC and in one of his passages he tells of Pushpaka, the Vimana of Ravana, king of Lanka and the main antagonist in the Hindu epic, and describes it as follows:

“The Pushpaka carriage, which resembles the Sun and belongs to my brother, was brought by the mighty Ravana. That great air car can go everywhere at will. That carriage resembles a bright cloud in the sky. And King Rama entered, and the excellent carriage commanded by Raghira rose into the upper atmosphere.”

“Strong and durable must be made the body of the Vimana, like a large flying bird, of light material. Inside one should place a mercury engine with its iron heating device below. Through latent force in mercury, which triggers the buoyancy swirl, a man sitting inside can travel great distances in the sky. The vimana’s movements are such that it can climb vertically, descend vertically, move forward and backward. With the help of machines, humans can fly in the air and celestial beings can come to Earth.”

In the thousands of years that followed, India began building temples in the form of the Vimanas, as described in its sacred texts. These buildings are very similar to the spaceships built today, and are physical documents of an extraterrestrial technology from a long time ago.