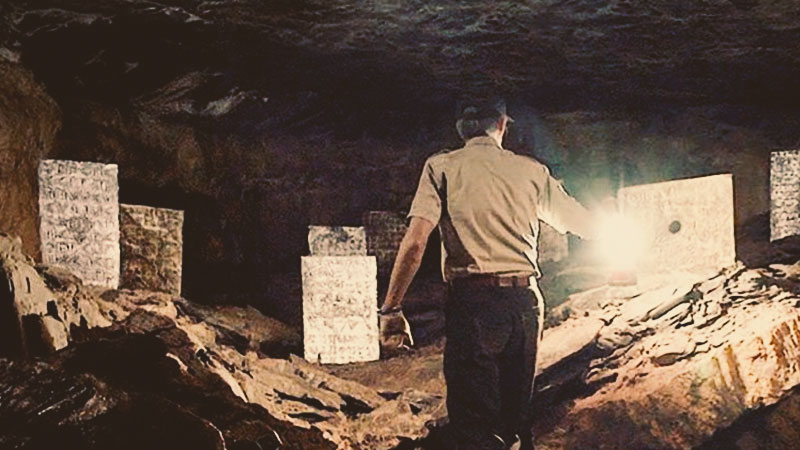 In the Amazon region called Morona Santiago there is a very deep cave known as “Cueva de los Tayos”. The cave is named after the Tayos birds that live in its depths.

The oldest information of the cave dates back to the year 1860 when general and explorer Victor Proano sent a brief description of the cave to the then President of Ecuador, Garcia Moreno.

But the cave was only popularized in 1973, by Erich von Daniken, in his book “The Gold of the Gods”, in which he wrote about the researcher Juan Moricz who claimed to have explored the “Cueva de los Tayos” in 1969 and discovered a real treasure, objects of gold, silver and bronze, discs, plates and some helmets, unusual sculptures and an incredible metallic library made of solid gold leaves with hieroglyficaic writings that he believes were created by a civilization lost with the help of extraterrestrial beings.

The Discovery of the Cave

Juan Moricz was reportedly taken to the entrance to the cave by the Shuar Indians, thanks to his friendship with them. Moricz believed that a lost civilization had lived inside the caves, whose network of underground tunnels, with several hidden entrances, spread beneath the entire Latin America connecting the entire continent.

This belief exists in most indigenous cultures of the American continent. The Indians of Ecuador, such as the Shuaras and the Coangos, believe that the tunnels were used in the distant past by their ancestors, thus allowing contact between the peoples of distant lands, however when they left the caves to live on the land, the knowledge of the hidden entrances were lost.

According to Juan Moricz’s account, upon entering a certain cave site, he came across several blocks of stones encrusted with precious stones and gold blades of sizes ranging from 1 to 1.5 m long and 25 to 50 cm wide, a few millimeters thick. In these pieces were engraved unusual symbols, which supposedly would have been left by an ancient people and incredibly advanced for the time.

Juan Moricz recorded at the registry office in the city of Cuenca a deed in the presence of several witnesses who confirmed his incredible discovery. The scripture states: “In the eastern region, province of Morona-Santiago, within the limits of the Republic of Ecuador, I discovered precious objects of great cultural and historical value for humanity. It probably contains a summary of the history of a missing civilization of which, until that date, we had no clue. The objects consist mainly of metallic blades engraved with signs and ideographic scriptures, a true metallic library that contains the chronological relationship of human history. Such objects are scattered within the various caves and are of varied nature.”

In 1972, Moricz took Erich von Daniken to see a secret entrance that gave access to a large labyrinth and he wrote: “All passages form perfect right angles. Sometimes they are narrow, sometimes wide. The walls are smooth and often seem to be polished. The ceilings are flat and sometimes seem covered by a kind of enamel. My doubts about the existence of the underground tunnels disappeared as by magic and I felt extremely happy. Moricz said passages like the ones we were going to stretch for hundreds of kilometers under the soil of Ecuador and Peru.”

As a result of the claims published in Daniken’s book, an investigation of the “Cueva de los Tayos” was organized by Stan Hall in 1976.

It was one of the largest and most expensive cave explorations ever undertaken. The expedition brought together more than 100 people, including experts in a variety of fields, British and Ecuadorian military personnel, a film crew and the astronaut Neil Armstrong.

Neil Armstrong entered the cave and reached up to 70 meters deep, along with the other explorers attracted by the idea that it could have been the dwelling place of an ancient and unknown civilization, or perhaps even the presence of extraterrestrial beings. At the time, Armstrong reported that his stay inside the cave was more significant than his own going to the Moon.

The team also included eight experienced British speleologists who explored the cave and conducted a precise survey to produce a detailed map of the cave and some items of zoological, botanical and archaeological interest were found.

“I like to say that, deep down, all human beings have these two dimensions: the mystical and scientific view. And about the Cueva de los Tayos is putting the debate in both plans. It’s very impressive, as original, to feel a primitive force. And for those who are not an expert, we see galleries in which it is difficult to imagine how this could be created,” said filmmaker Miguel Garzón, who was part of the expedition and entered the cave with his film crew to create the documentary “Tayos,” which sheds light on the mysteries that house these caves in southeastern Ecuador.

At the bottom of the “Cueva de los Tayos” they found a well whose path leads to a flooded cave, and entering it implies submerging about five meters under the water when not in rainy weather, which requires knowledge of diving and above all courage.

“One of the people who came with us, Oscar Leonel Arce, came back later and went through this point and traveled another two kilometers. There is still a lot to explore,” Garzón says in his documentary.

During the expedition, Stan Hall became friends with Ecuadorian Patronio Jaramillo who claimed to have entered the library in 1946, when he was 17 years old, taken by an uncle who was a friend of the Shuar people. He claimed that deep in the cave had to dive into the water, swim through an underwater tunnel and then climb.

Jaramilo said he saw a library composed of thousands of large metal books stacked on shelves, each with an average weight of about 20 kilos, each page contained a side with ideograms, geometric drawings and inscriptions in a language unknown.

Even more interesting in his account is that he said there was a second library, with small but heavy books and translucent like crystal, arranged on sloping shelves covered with gold leaf. There were also zoomorific and human statues, metal bars of different shapes, sealed doors covered in mixtures of colored and semi-precious stones, and a sarcophagus, carved in hard material, containing a golden skeleton of a very large human being, however, Jaramillo never produced physical evidence of his claims.

Jaramillo and Hall teamed up to finally get to the Metal Library and organized an expedition, but this never happened as Hall received the news of Petronius Jaramillo’s death and abandoned the expeditions until the year 2000, when he found aerial maps that pointed a curve in the river joining a fault, known to open up in a cave system that ran several miles , suggesting that an ancient earthquake could have opened the underground network, and that someone at some point in the past discovered and used the site to install the metal library.

Stan Hall came to this place and realized that he fit jaramillo’s description perfectly, however, he was not a “treasure hunter” and believed that this story was not for him, and did not want to move on. Thus, on January 17, 2005, Hall informed the Ecuadorian government of the cave’s location with hopes that it would focus on some future expedition.

The Artifacts of Father Crespi

The Italian missionary Father Carlo Crespi lived for more than 60 years among the indigenous peoples of the Ecuadorian Amazon and, in addition to religious work, devoted himself to education, cinema, anthropology and archaeology, and is considered one of the first researchers of the “Cueva de los Tayos”.

According to Father Crespi himself, he would have been taken by the Shuar people to the mysterious passages that led for miles and more miles of chambers and tunnels that interconnected the entire American continent, according to Indian legend, and kept with him many artifacts found inside the cave that were given to him as a gift by the Indians. Many of these artifacts, some made of gold or other precious metals, feature elaborately carved carvings and symbols that are not associated with the Shuar people. One of the gifts was a metal plate with 36 symbols that no one has been able to translate to this day.

According to him, the cave “has no bottom” and the artifacts passed to him by the Indians came from a large pyramid hidden in one of the cave chambers. For fear of future sabernaons and depredations at the pyramid site, Father Crespi would have asked the Indians to keep the place safe, concealing its location so that it would never be discovered.