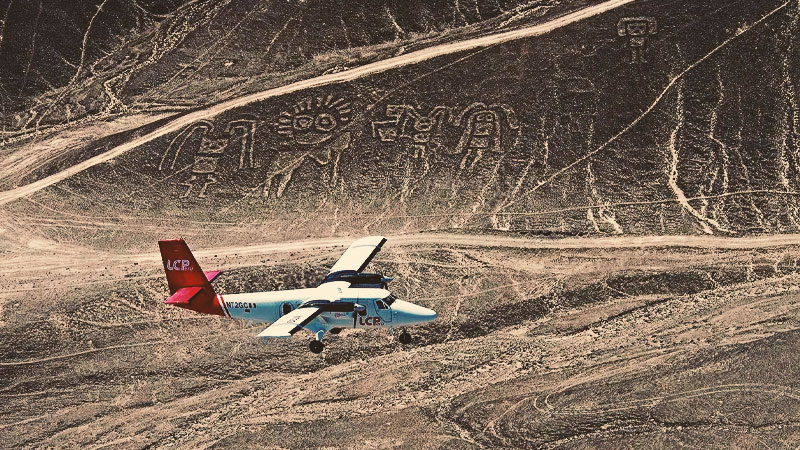 About 400 kilometers (250 miles) south of Lima, Peru, close to the shores of the Pacific Ocean, lies a vast coastal plain that holds one of the oldest and most intriguing mysteries in the world.

Spanning over 280 square kilometers (170 square miles) of flat land, the hard red soil is marked by a series of strange trenches, not too deep, around 15 to 30 centimeters (6 to 12 inches), carved into the ground.

While not wide, some of them are extremely long, stretching up to 50 kilometers (30 miles) in fantastic parallel lines across the desert floor, while others are curved, creating spirals like a huge fingerprint.

The first people to observe them in recent times were travelers who stumbled across them in the 1500s and believed they were remnants of a vast and complicated road system from a bygone civilization.

It was not until 1927 that the perception of these fantastic lines changed. Peruvian archaeologist Toribio Mejia Xesspe was climbing some nearby hills when he looked towards the valley and quickly realized that these trenches in the desert were not the remains of ancient ancient roads, but a set of huge symbols and images that had been carved into the earth, on such large scale that from ground level they were unrecognizable.

This was the beginning of the investigation by archaeologists, trying to understand the great mystery of the Nazca Lines.

Could Aliens Have Created the Nazca Lines?

When you start to realize the amazing complexity of the designs and the huge size of the Peruvian Nazca Lines, it’s easy to see why outside forces and supernatural explanations are the first thought of many people.

Theories claim that the Nazca, the indigenous people credited with creating the Nazca Lines around two thousand years ago, could not have been able to create these huge designs on land without being able to fly, as it is nearly impossible to do so without being directly above them.

Some research points to evidence that the Nazca Lines could have been created by the aliens themselves, who had aerial technology.

Other theories say that the Nazca people created the lines following instructions from extraterrestrials, often believing that they could be landing and takeoff runways for alien spacecrafts, or as a way to attempt to contact the aliens, in the hope that the sculptures would be large enough to be visible from space.

Ancient Astronaut Theorists point to some of the more unusual engravings of Nazca, many of which depict things from nature like insects, birds, fish, trees and flowers, but it is the one that has been called the “Astronaut of Nazca” which depicts a figure humanoid with a bulbous head, almost looking like a man in a spacesuit, which stands out.

Swiss researcher Erich von Däniken believes that some of the engravings depict the aliens themselves, an idea he promoted in his book “Chariots of the Gods”, published in 1968, and which brought the Nazca Lines into the world of ufology.

The Nazca, who inhabited the valleys of the Rio Grande basin between 100 BC and 800 AD, practiced mummification and archaeologists have discovered several well-persevered bodies, some in extremely unusual condition.

Some of the Nazca skulls showed unnatural elongation, fueling the idea that the Nazca civilization could be involved in some way with extraterrestrials.

To this day, the Nazca Lines remain one of the world’s great unsolved mysteries.