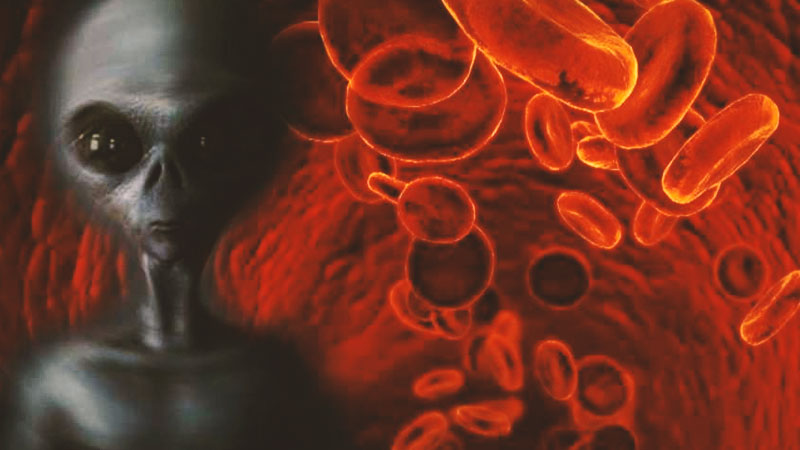 The Theory of Evolution tells us that humans and monkeys share a common ancestor and therefore our blood should have evolved in the same way. For all primates this is true, except for humans.

This leads some to question whether the Rh Negative blood type is of alien origin or simply a casual mutation that has arisen at some unknown point in our evolution.

However, before continuing, it is important to know what we mean when we talk about blood types.

Blood is composed of red and white blood cells and platelets found in liquid plasma. There are antibodies and antigens in the blood that, when identified, can tell us what kind of blood you have.

Antibodies are part of our defense and help alert our immune system to destroy germs and foreign bodies, while antigens are found on the surface of red blood cells.

An antigen is any substance foreign to the body that triggers the production of antibodies as a response to an attack on the immune system. We all have some antigens in our blood, so that only blood that contains the same antigens as ours can be used in transfusions and are represented by the four blood groups: O, A, B and AB.

In addition to containing antibodies and antigens, each of these groups can also be Rh Positive or Rh Negative.

The Rh factor in our blood derives its name from the Rhesus Monkey, which like all other primates, has only the Positive factor, but when it comes to humans, there is a small percentage of the population with a strange anomaly.

Only about 15% of the world’s population has the Rh Negative factor and more, this percentage of the population is not evenly distributed across all areas of the planet.

Conventional history tells us that about 200,000 years ago, humanity emigrated from Africa and spread around the world. Thus, modern humans are descendants of early Africans, as dna evidence shows, but this also offers interesting information about people with rh negative blood type.

Research shows that pure Africans, who have had no interaction with other mixed breeds, do not have the Rh Negative blood type, and of African groups that have had interaction with Europeans or Asians only about 3% of the population contains this genetic marker.

In Asia, this proportion is even lower, with only about 1% of the population possessing this rare blood type.

The gene that produces Rh Negativo is more widely present in Caucasians, with the highest concentration found in a small region of the Iberian Peninsula between France and Spain, known as the Basque region, where up to 40% of the population is Rh Negative, and this is not the only distinctive characteristic of the region.

Basques are the only ones among the peoples of Western Europe to speak the Euskara language, a native language that is not spoken anywhere else in Europe or the world. But this language is not only isolated but remains a mystery, it has no relation to other languages and its origin is unknown, which causes some to suggest a connection with some extraterrestrial group that could have inhabited the area in a remote past.

“No one can tell where the language comes from, scholars have researched this for many years, but there are no clear conclusions,” says Pello Salaburu, professor and director of the Basque Language Institute at the University of the Basque Country in Bilbao.

A more mundane explanation for the homogeneous traits of the Basque people is the idea that the first farmers, at the beginning of the agricultural revolution, mingled with local hunters before isolating themselves for thousands of years preserving their language and genetics.

Another theory is that the Nephilins, from biblical tradition, would be responsible for rh negative blood types.

In the Book of Enoque, the Nephilins, also known as the Vigilantes, descended from heaven and mated with humans, giving rise to giant angel-human hybrids.

This group of angels and their descendants would have been exterminated by the Great Flood, though some would have survived, leaving the rh negative blood distinction.

In South America, it was discovered that some of paracas’ skulls, oblong and strange-shaped, had red hair in a region where this hair color is not native. The gene for red hair originates from the Middle East and Europe and some researchers, such as L. A. Marzulli, they connected these red skulls to the Nephilins.

In the history of Sumeria, it is said that the Anunnakis, the extraterrestrial race that helped establish the ancient Mesopotamian civilizations, making use of genetic manipulation and in vitro fertilization, would have combined their own extraterrestrial genes with the genes of the most evolved primates living on Earth, creating a new species of beings with formidable force and large size, and some researchers suggest that the Rh Negative blood type would have had some part during this process.

Carriers of the Rh Negative factor usually have a lower body temperature and high blood pressure, with striking blue, green or hazel eyes, red or brown hair, and their senses of vision, hearing or smell are more sensitive, being particularly sensitive to sunlight.

Many people with Rh Negative blood are born with extra ribs or vertebrae at the base of the spine, commonly called the “extra tail”, suggesting reptilian characteristics.

These people also tend to exhibit above-average intelligence, excessive empathy for others, and often experience unexplained phenomena such as high intuition and increased psychic abilities, often with feelings of being different or being displaced.

The researchers also found a high percentage of the Rh Negative factor among people who claim to have been contacted, directly or indirectly, by extraterrestrial beings, and some experts in the field believe that this is further proof that this type of blood may have alien origins.