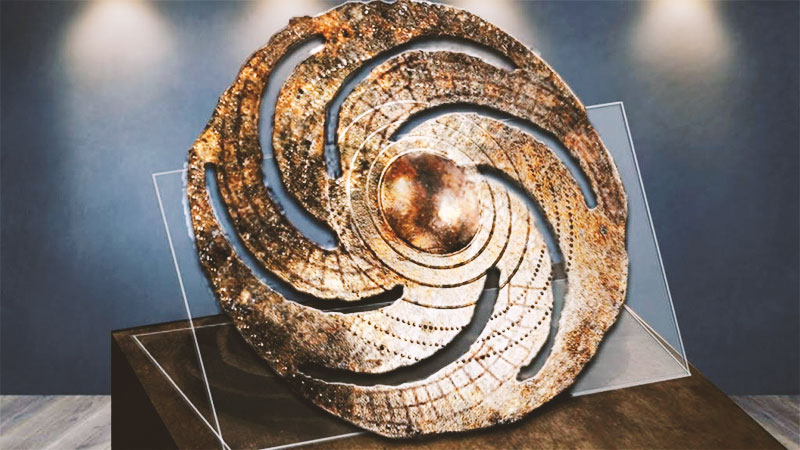 Many ancient civilizations studied the night sky and made remarkably accurate solar and lunar calendars and the rock art found throughout Europe is not simply depictions of wild animals as previously thought, animal symbols represented constellations of stars and were used to record dates and events such as comet passes.

The Colgante Disk is one of those objects that are part of a vast list of ancient artifacts that humanity has not yet discovered its origin and purpose.

The artifact is part of the collection of the Rafael Larco Herero Archaeological Museum in Lima, Peru, and is actually a disk with a kind of “black hole” at its center and its creation date is estimated to be at least 2,000 years.

The disk is believed to have been created by the Moche, a civilization before the Incas that ruled the northern coast of Peru between the 1st and 8th centuries, and were known for their complex desert irrigation systems and adobe pyramid constructions and, as many ancient cultures used religion to unify society.

Archaeologists have unearthed many fascinating artifacts belonging to the Moche culture, but none of them look like this peculiar disk, leading to the belief that the disk, which has never been radiocarbon dated, may be much older than thought or, as Ancient Astronaut Theorists suggest, the Colgante Disk may not even be a terrestrial object.

Milky Way or Another Galaxy?

The Colgante Disk is so mysterious that not even astronomers have been able to determine whether there really is a galaxy represented in the object. However, taking into account that there are records of advanced studies of astronomy in antiquity, the disk should have an important function for scholars of its time.

Despite the similarities, the known model of the Milky Way has two main spiral arms, Perseus and Scutum-Centaurus, and two smaller ones, Sagittarius and Orion, which is where we are located, but the number of arms of the Colgante Disk does not correspond to the arms of our galaxy, which suggests that if the ancient Peruvian disk is indeed a representation of a spiral galaxy, then it is not the Milky Way.

But, coincidence or not, a small highlighted dot, near the edge of the artifact, refers to the location of our Solar System in the Milky Way.

To date, the origin and purpose of the Colgante Disk remain unknown, but this is neither the first nor the last of intriguing artifacts from a distant past that hark back to advanced levels of knowledge or high-tech devices far beyond its time.

The Nazca mummies continue to reveal their secrets as scientists carry out new tests, and what they discover could change all of history.