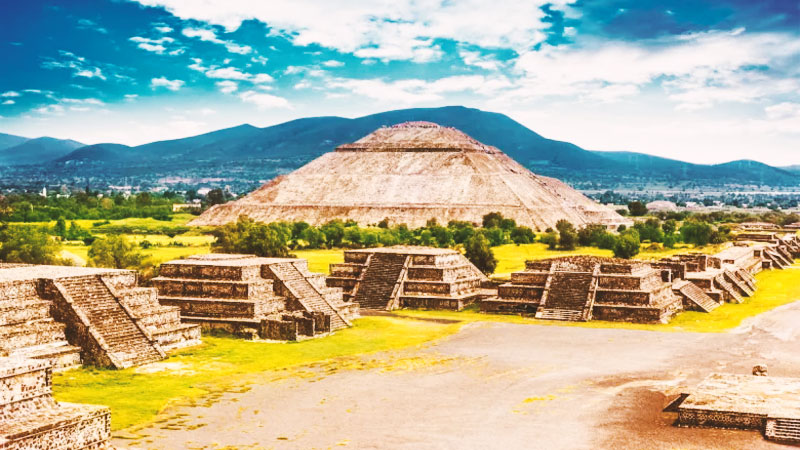 Teotihuacan was one of the largest Mayan cities in ancient Mexico, but the inhabitants of this metropolis disappeared in the 7th century, leaving behind its civilization that was once very prosperous.

No one knows for sure what happened, where they went or why they left, but some evidence tells us that the residents of Teotihuacan were more advanced than previously thought.

Huge amounts of both Mica and Mercury, minerals that play a key role in today’s aerospace industry, were discovered in the ruins of Teotihuacan and its pyramids proved very similar to the ancient pyramids found in Egypt.

The History of Teotihuacan

The ruins of Teotihuacan are about 30 miles northeast of Mexico City and the city is believed to have been founded in the 1st century BC and in less than a century, it was already a prosperous metropolis with a population of about 200,000 inhabitants. Its name, meaning “City of the Gods” was given by the Aztecs, who made pilgrimages to the ruins in later years.

The ruins revealed dozens of apartment buildings, most with flat roofs that support the theory of gardens or roof terraces. Other structures that look like residences are small buildings clustered around a central courtyard. In the center of the courtyard is a kitchen where community residents possibly gathered for daily meals.

The city has established an irrigation system to take advantage of the abundant supply of spring water. Adequate water, good soil and moderate climate have contributed to the flowering of its vegetables and fruits, including corn, tomato, beans, avocado and cocoa, the latter used for its many health benefits. There was a lot of wild hunting to complete their diet.

The citizens of Teotihuacan had a tin for arts and crafts. Archaeologists discovered sculptures and ceramics, including one-meter-wide round plates with lid, decorated vases, incense burners, figurines and clay and stone masks that apparently adorned statues. Most of the buildings have been decorated with murals ranging from simple landscapes to detailed portraits of religious events.

In addition to plenty of water, Teotihuacan also had a river of silver mercury liquid metal running underneath it. Large quantities of mica mineral were found in almost all buildings of the city, a type of crystal, with thermal and electrical insulation properties, which today is known for its various uses in the electronics and aerospace industries.

Tests show that the Mica found in Teotihuacan is originally from Brazil, more than 4,000 kilometers away, and even today there is no explanation of how the Mayans transported these vast amounts of Mica or why they needed it in the first place.

The architectural layout of Teotihuacan, with its 20 square kilometers, would have been a perfect location for an old Spaceport.

The dominant feature of the city is its wide Avenue of the Dead, which begins in the agricultural fields and runs the entire length of the city, ending in the Pyramid of the Moon. The avenue today is almost 2 miles long and 40 meters wide, but archaeologists have found that the avenue was actually much longer and wider than it seems today.

Satellite photographs strongly suggest that the Mayans designed this avenue to be some kind of old airport or spaceport.

Traces of some of the buildings along the possible runway indicate that they would support aircraft. After the examination, scientists discovered landmarks along the track that appear to have been designed for riders to see in order to inform them of any changes to the instruments they needed to make.

The Pyramids of Teotihuacan and Giza

Archaeologists have found that their size, layout and particularly their positions relative to each other correspond almost exactly to those of the three pyramids of Giza in Egypt.

The three pyramids of Teotihuacan and the three pyramids of Giza are aligned with the stars of orion’s belt, and even more surprising is that the engineers responsible for building the pyramids in both locations demonstrated a great understanding of the fundamental mathematical constants.

The Mayans have left behind mysteries that scientists, archaeologists, historians and interested people are still trying to unravel, even after all these years.