Início English The Mysteries of the Devil’s Tower 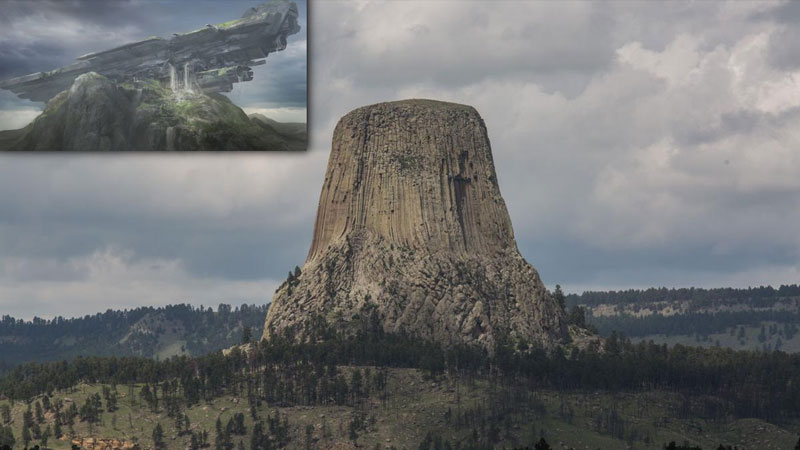 The rock formation rises dramatically by 386 meters above the surrounding terrain, and its summit is located at 1,558 meters above sea level.

The enigmatic natural wonder is the first declared national monument of the United States, established on September 24, 1906 by President Theodore Roosevelt.

The Devil’s Tower and the Pleiades

According to the legends of the Native American tribes of the Kiowa, Sioux and Lakota, in the distant past, some young girls went out to play and were seen by giant bears who began chasing them.

In an effort to escape the bears, the girls climbed on top of a rock, knelt down and prayed to the Great Spirit to save them.

Upon hearing their prayers, the Great Spirit made the rock grow toward the sky so that the bears would not reach the girls.

The bears, in their attempt to climb the rock, which had become too steep, left deep claw marks on the sides, and when the girls reached the sky, they became the Constellation of Pleiades.

Some researchers in ancient astronaut theory argue that many of these legends originated from extraterrestrial-related events and UFO sightings in the past.

However, there are other stories and legends about the mysterious rock formation.

A Legend of the Sioux tells that two boys moved away from their village when another powerful bear, with claws, began chasing them. When the bear approached the boys and was about to grab them, they prayed to Wakan Tanka, “the sacred” or “the divine”, the Great Spirit, to save them from the bear.

They climbed a large rock as the bear desperately tried to climb the rock and catch the two boys. However, the bear failed to climb and left huge marks on the rock. The bear, called “Bush”, eventually gave up and came to rest in a place now known as Bear Butte.

Wanblee, an eagle, rescued the boys and helped them out of the massive rock, returning them to their village.

For some theorists, these beings who apparently protect the inhabitants of the place, such as the Wanblee eagle, would be spaceships and beings of alien origin, misinterpreted by the ancient inhabitants of the time as gods and great birds.

Close Encounters of the Third Kind

In 1977, the Devil’s Tower was used as background in Steven Spielberg’s “Close Encounters of the Third Kind”, which was advised by astronomer J. Allen Hynek, a member of the Blue Book Project, the project carried out by the United States Air Force between 1952 and 1969 to study UFOs.

Strangely, as in many other nearby places, tourists and locals reported strange lights in the sky just above the enigmatic rock formation.

Witnesses claim that these lights end up at the top of the massive rock and, because it has a strong connection with extraterrestrial beings and legends of beings from the sky, this was the reason why the Devil’s Tower was chosen by Steven Spielberg for his famous movie.