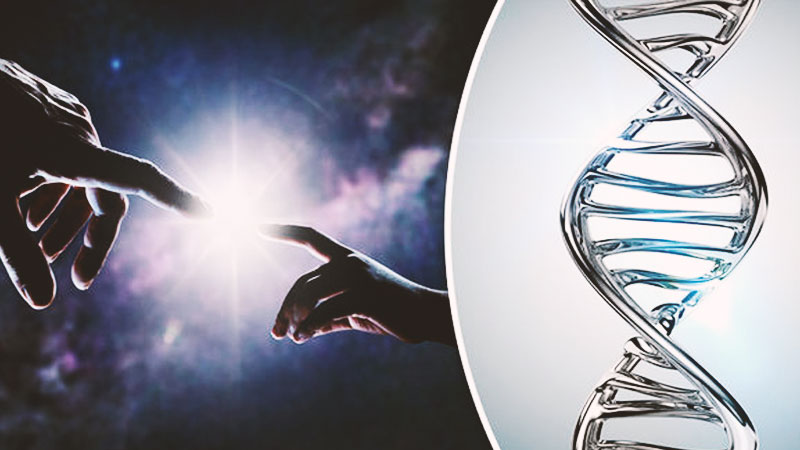 The mysteries surrounding our genetics have often been associated with the Cosmic Panspermia Theory, a hypothesis that suggests the existence of life throughout the Universe being distributed by meteorites, space dust, comets and asteroids, which first emerged in the 5th century BC, in Greece, and was again highlighted in the 19th century by Hermann von Helmholtz.

Panspermia’s theory is supported by numerous scientists, including Francis Crick, the creator of the human DNA double helix form theory.

Although the notion that life on Earth has extraterrestrial origins is not new, a pair of researchers believe they have found an ancient code that could prove this theory, and for them, our DNA carries messages, mathematical and symbolic patterns that seem artificial, such as the repetition of the number 37, which could be an “alien signature.”

They believe that hundreds of millions of years ago, these “extraterrestrial scientists” may have visited Earth or sent an electromagnetic signal carrying information that would have altered our DNA.

Another possibility suggests that life may be the result of a “Direct Panspermia”, and scientists believe that these extraterrestrials could have “sown” the Earth, sent genetic material intentionally to start life.

Mathematician Vladimir Shcherbak and astrophysicist Maxim Makukov postulated that human beings were created through genetic engineering developed by extraterrestrial beings from another planetary system and claim to have discovered an “intelligent signal” encoded within our genetic material.

According to Shcherbak and Makukov, DNA appears to be an artificial, mathematically perfect creation: “The simple configurations of the code reveal a set of architectural and ideographic patterns of symbolic language. In addition, it includes the use of decimal notation and precise and systematic logical transformations.”

The analyses made in the genetic code, which is the set of rules that translates DNA into proteins and does not change as it is transmitted from generation to generation, indicate that, mysteriously, the number 37 appears at least 9 times in its chemical structure and, according to the calculations of scientists, the probability that this repetition has happened naturally and randomly is 10 trillion to 1.

“It was immediately clear that the code has a non-random structure. The patterns we describe are not simply casual. They have some characteristics that, at least from our point of view, are very difficult to attribute to natural processes,” says Makukov.

In fact, other mathematical settings with the number 37 also appear in the human body. The average body temperature is 37 degrees Centigrade, the number of cells in the human body is 37 trillion and the molecular nucleus mass shared by all 20 amino acids present in all proteins existing in nature is 74, which is double 37.

Therefore, the number 37 is intrinsically linked to DNA and the human body, being the biological basis of humans.

Shcherbak and Makukov also claim that the genetic code appears to contain a type of “receiver”, such as a radio or satellite that captures electromagnetic waves, and thus we could have direct and bodily contact with our extraterrestrial creators.

And as for who would have encoded the mysterious message, Makukov says, “Maybe they left a long time ago. Maybe they’re still alive. I think these are questions for the future. But by the code standards, the explanation we give, we believe is the most plausible.”

Another evidence of an extraterrestrial intervention can be found in a 2004 scientific study by a team of researchers at the University of Chicago in the United States.

This study concluded that the complexity of the human brain could not have occurred naturally due to Evolution being slow and random, and that about 50,000 years ago there was an “unknown event” that rapidly drove the evolution of the human being, allowing its sophisticated development.

The Rh factor is another strong evidence that deserves to be highlighted. People with Rh Positive factor in their blood have a protein present in the membrane of red blood cells that people with Rh Negative factor do not have.

The dominant traditional science says that the Rh Negative factor is just a casual mutation that has arisen at some point in our evolution, but strangely humans are the only beings on this planet who possess the blood type with Rh Negative factor.

However, alternative researchers propose that the Rh Negative factor is evidence of an ancient hybridization between extraterrestrials and humans and that its appearance, exclusively in humans, is related to the ancient stories about the “fallen angels” who mated with human women, giving birth to the Nephilins.

All this information is logical and compelling evidence about an extraterrestrial intervention in a remote past and one day we will have the technology to decipher all these mathematical clues and patterns that will reveal hidden messages in our DNA that will help us unravel the mysteries of our origins.