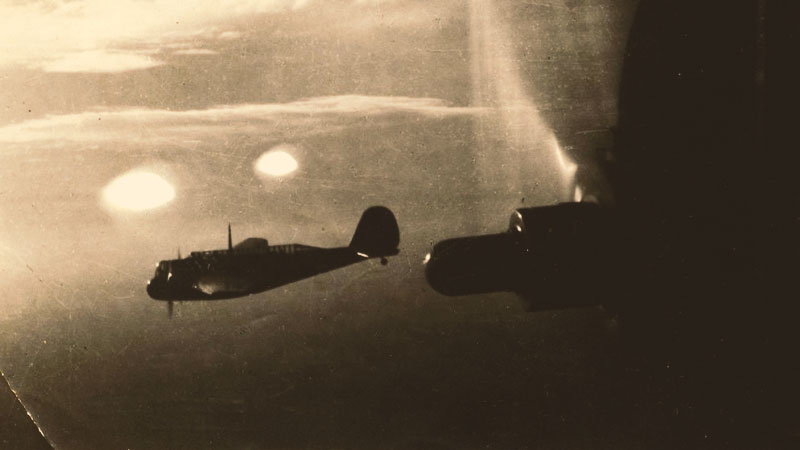 Just before Christmas 1944, US Air Force pilot Edward Schlueter was flying over enemy territory when he, his radio operator and the intelligence officer Fred Ringwald saw strange objects that they described in their reports as “eight to ten bright orange lights on the left wing flying at high speed”.

The Unidentified Flying Objects (UFOs) got behind the US military plane and started following it. The American pilot tried several maneuvers in an attempt to lose the mysterious objects, but even steep dives or sharp turns did not work.

Suddenly, the objects disappeared, and surprisingly, during the entire encounter, neither the American pilot nor the mysterious objects fired any shots.

This is just one example of many similar incidents that took place in the skies over Germany during the final months of World War II.

The objects always traveled at great speeds and were able to make maneuvers to keep up with American planes.

The Allies worried that Germany had created a new weapon, although no planes were damaged and no shots had been fired.

The objects were nicknamed by American pilots “Foo Fighters”, after a popular cartoon of the time called “Smoky Stover”. In the cartoon, the character Smoky often said, “Where there’s foo there’s fire”.

The term caught and even radar operators used the term “Foo Fighter” to alert pilots of sightings.

Although most encounters took place in Europe, there were a few similar incidents in the Indian Ocean.

Interestingly, after the war was over, the Allies discovered that the Axis powers had also sighted and reported the same objects and feared that the Allies had developed a secret weapon.

Some theories have tried to explain the phenomenon, such as apparitions of extraterrestrial spaceships or electrical discharges from the wings of planes, known as St. Elmo’s Fire. Another theory suggests that the spheres spotted by the pilots were Ball Lightning, an as-yet unexplained electrical atmospheric phenomenon.

Psychologists also offered some explanations, but none that experienced aviators found credible. They didn’t believe they were hallucinating from battle fatigue, and as the lights did no damage, the pilots doubted they were secret remotely controlled German weapons.

After the end of the war, Rudolf Lusar, a major in the German army, wrote a book about secret weapons used by Germany during the war.

He described two types of golden ball-shaped objects that Allied pilots had identified during the war, one he called a “Feuerball” and the other a “Kugelblitz”.

According to Lusar, the devices were jet-powered and guided automatically, and their purpose was to emit electrostatic discharges from the Klystron tubes to disrupt the electrical systems of the US Air Force’s bombers’ engines and prevent them from dropping bombs.

Although Lusar’s description seems plausible, researchers disagree about the validity of his account. After all, not a single Allied plane reported complications after an encounter with the Foo Fighters. So it seems that if the Germans had developed such a weapon, it just didn’t work.

To date, no conclusive explanation for the Foo Fighters has been found.

The mysterious piece of aluminum dated 250,000 years ago could be proof that aliens visited Earth in the distant past.