Início English Could the Egyptian God Ra Landed in the Sphinx? 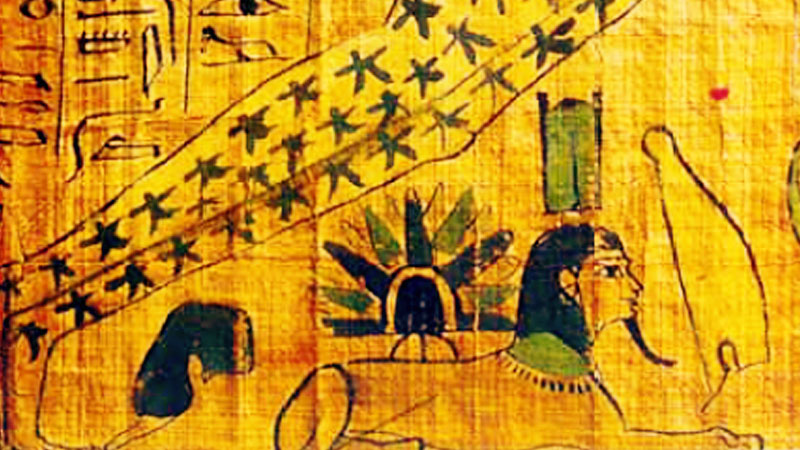 An intriguing 3,000-year-old papyrus named “Djed Khonsu Ief Ankh” is on display at the Cairo Museum, and depicts what the “Solar Boat of Ra” looked like in the eyes of the first scribes of Ancient Egypt.

The object at the top of the Sphinx looks nothing like ra’s traditional solar boat seen in other later representations of Egyptian mythology and could be evidence of the connection between Ancient Egypt and extraterrestrial beings.

Ra is the sun god in Ancient Egypt, being also known as “Father of the Gods” and “Father of Men”. For the Egyptians, Ra was the most important deity, and it was believed that he was the creator of the world, the gods, and humanity, and was considered the protector of Egypt.

Ra’s reign was called by the ancient Egyptians the “First Time” and at that time gods and men lived side by side on Earth.

Over time, Ra became increasingly weakened due to old age and men promoted a rebellion. In response, Ra gathered her gods’ counsel and decided to send the goddess Hator to control the situation, but she was about to annihilate all mankind when she was stopped by Ra, who did not want to destroy her own creation.

So Ra decided to move away from Earth once and for all and set off, taking with him all the other gods who became the stars of the firmament.

UFO in the Sphinx?

The origin of the Sphinx is a controversial theme, the date of its creation, who built it and its true function still remain one of egypt’s greatest mysteries. It is known that there is a degree of erosion that suggests that the Sphinx dates back at least to the year 10,000 BC, and many researchers reported finding underground passageways and hidden chambers beneath it.

Wayne Herschel, author of the book “The Hidden Records”, offers a completely new hypothesis explaining the veneration of god for ancient civilizations, and suggests that the strange object is actually a UFO and that the papyrus provides a lot of evidence, showing the constellation that is closest to the specific star of Ra, along with other forgotten symbols, and most importantly: where the disc landed!

“It is a disc with a dome that radiates a bright colored light and is resting on three legs like a tripod. No wonder the sphinx’s back was flat. There are traces of what appears to be the remains of an arched portal, which has now been filled with many repairs over thousands of years and is visible on the back of the Sphinx’s head!”, says Herschel.

The author also identified a stellar pattern that is reproduced in monuments of almost all ancient Megalithic civilizations. The “star of the gods” is identified in a precise position near the Pleiades star cluster, and he sets out to prove that at least 16 other civilizations across the globe show exactly the same records.

“The 3,000-year-old papyrus has everything I was looking for, the cosmic address of the sun god Ra, what his heavenly ship was like and where he landed, all in a well-known portrait of Genesis from the early days of ancient Egypt. The papyrus has the typical Egyptian portrait of the sacred feminine and the sowing of the sky goddess Nut by Geb,” says Herschel.

If these patterns, so meticulously exposed by the ancients, are in fact venerating a very specific area of the night sky, it is very likely that our human ancestors believed they had their origins in the stars, and these gods seem to be very real, not only for the Egyptians, but for all ancient civilizations.

A former U.S. military official details information about extraterrestrials, time machines and the Orion Cube, an alien device capable of showing events that will occur in the future.