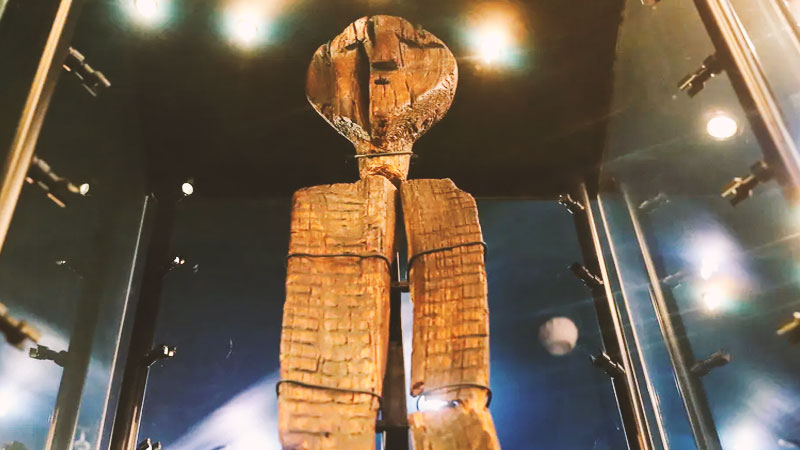 Discovered in 1894 by miners in a swamp in the Sverdlovsk region of the Russian Ural Mountains, the sculpture known as Shigir Idol may have been created more than 12,000 years ago, making it twice as old as the Egyptian pyramids.

The idol also has engraved symbols, similar to those found in the ruins of the ancient temple of Göbekli Tepe in Turkey, which may mean that this is the oldest text known today.

Initially the piece was not treated too important because it was carved in wood, a material that can easily degrade over the years, which led researchers to believe that it was a recent artifact, but and the sculpture was preserved thanks to the antimicrobial properties of the swamp peat where it was found, which allowed him to survive since the end of the last ice age.

In the late 1990s, a radiocarbon dating identified the idol as being approximately 9,000 years old, although in 2021, a more precise technique, known as mass spectrometry dating, found that its true age is at least 12,100 years old, according to archaeologists at the University of Gottingen in Germany, and the RAS Archaeology Institute and the Sverdslovs, Sverdslovs, both in Russia.

Thomas Terberger, one of the authors of the study, said the sculpture was made in a period where major climate change occurred, when forests began to spread across the hottest glacial Eurasia.

Researchers, including Graham Hancock, have stated that the idol’s new dating may fit the “Recent Dryas” hypothesis, positing that a comet or large meteor hit Earth about 12,900 years ago, creating a mini ice age of 1,200 years.

Hancock believes that this impact erased the evidence of older, more advanced civilizations that may have existed at that time.

The researchers also determined that the geometric traces present in the sculpture are similar to the patterns already seen in other stone pieces in the Göbekli Tepe Temple in Turkey, which have an age similar to shigir idol.

However, it is still unclear whether the Shigir Idol had any purpose, although the engravings present in the pieces appear to contain a perhaps more spiritual meaning, such as the relationship between heaven and Earth or ancestral spirits, as explained by Svetlana Savchenko, curator of the artifact and co-author of the research.

“It is one of the most original sculptures ever found, there is nothing like it in the world. It’s very alive and very complicated at the same time. The entire statue is covered with encrypted information. People were passing on knowledge with the help of the idol” , added Professor Zhilin of the Institute of Archaeology of the Russian Academy of Sciences.

For now, there is no consensus on what the marks covering the 5.3-meter-tall statue represent. Some experts believe that the carvings of the statue may be hieroglyphics containing encrypted information that describe the world of the time. A total of eight faces were identified, as well as carvings and engravings.

One of the difficulties of interpreting this code is the “polysemy”, and the same mark can have more than one meaning, which multiplies the number of interpretations.

According to ethnographic data, a straight line could be interpreted as the earth or the horizon, but also the boundary between heaven and earth or earth and water, among other meanings.

Other researchers suggested the possibility that idol could represent a map, where the lines would indicate destinations or days of marching, and arrows can be interpreted as directions, obstacles or geographical signs, such as rivers or mountains.

However, these same signs can be read from a magical point of view as an early path.

Experts studying the idol have come to the unanimous conclusion that the messages engraved on the idol remain “a complete mystery to modern man”.

The idol is currently at the Sverdlovsk Regional Museum in Yekaterinburg, Russia.