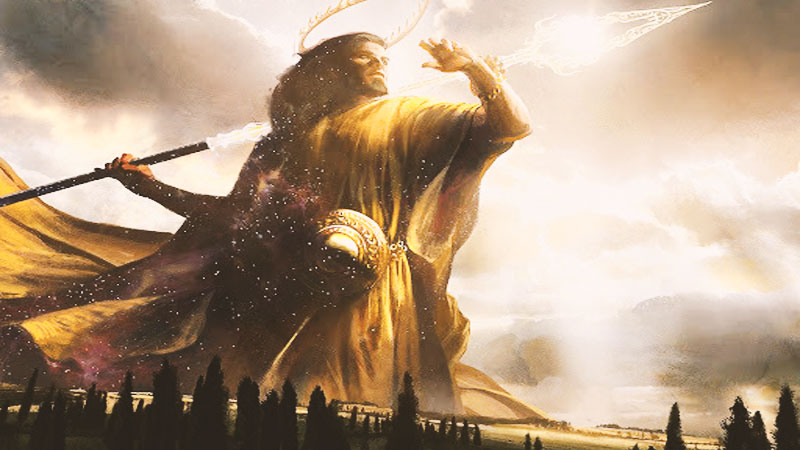 The Tuatha Dé Danann were called “The Shining”, an ancient pre-Celtic Irish tribe that invaded the island in ancient times. Later, they would be associated with Irish elemental beings, the Larel people or the fairies, but in Irish myths, they were nothing like the fairies of today’s folklore.

This tribe was not considered human, but described as tall, beautiful and elegant creatures that shone in the light. These mysterious beings brought with them the secret knowledge of the gods and arrived on “ships that descended from the sky” under a great mist that blocked daylight for three days and three nights.

When we begin to examine their history, there are numerous connections to ancient mythologies from other parts of the world.

Tuatha Dé Danann is translated as “People of the goddess Danu” or “Sons of the goddess Danu”, a primordial mother goddess. This same name, Danu, is found in Hindu mythology for the goddess Asura, meaning “primitive waters”, and also appears in the people of the Israelite tribe of Dan, who mingled with the Canaanites, also known as the “Dragon Lords of Anu”, who were said to be descendants of the ancient Sumerian Anunnaki.

Another historical reference can be found in ancient Mesopotamian mythologies where Danu or Anu was worshiped as the main deity among the Sumerians, Acadians, Assyrians, and Babylonians and was considered the creator of heaven, lord of the Anunnaki and ruler of Nibiru.

According to British author and historian Sir Laurence Gardner: “The ancient people of the Tuatha De Danann were the supernatural tribe of the pre-aqueou agricultural goddess Danae de Argos, or perhaps the Aegean mother goddess, Danu. But his real name translated into his oldest form was Tuadhe d’Anu. As such, they were the people or tribe of Anu, the great gods of the Anunnaki heaven.”

For researcher and author Zechariah Sitchin, the Anunnaki were space travelers who descended from the skies in “chariots of fire” bringing knowledge and technology and ruling humans for thousands of years. They are the divine kings of the ancient Sumerians, whose descendants migrated north into the Black Sea region and south toward Palestine, encountering other ancient peoples, merging their cultures and languages.

According to “Lebor Gabála Érenn”, a collection of poems and narratives that recount the mythical origins and history of the Irish from the creation of the world to the Middle Ages, the Tuatha arrived in Ireland “descending from the skies in dark clouds and landing in the mountains of Conmaicne Rein, bringing darkness over the Sun for three days and three nights”.

The Treasures of the Tuatha Dé Danann

According to mythology, the Tuatha Dé Danann brought knowledge and four great “treasures” or “talismans”. The first of these treasures was the Stone of Fal, which screamed whenever a true king set foot on it, this stone was placed on The Mount of Tara, the mythical residence of the High Kings of Ireland. The second was the Sword of Nuada, a weapon that inflicted invincible blows when used. The third was Lugh’s Spear, which never missed the target. The fourth and final treasure was the Cauldron of Dagda, from which comes a constant and infinite supply of food.

The Tuatha fought the Fomhoire, a group of invaders thought to be supernatural, meaning “Underwater People” and are described as hybrid creatures of animals and humanoides, often identified as the descendants of Cain or a little-known son of Noé named Cam.

Although the Tuatha Dé Danann prevailed and ruled for a long period, eventually they were defeated by another invader, the Melesians, who are considered the Celts. The Tuatha were forced to retreat to the “hollow hills”, an underground world that could only be accessed through portals found in megalithic structures and in the hills of Ireland. And so they came to be known as the Elythic People of the Celtic tradition.

It is interesting to note that the prefix “El” of elifics is a derivative of the sumerian god Elil and the Hebrew god Elohim.

There is also a striking resemblance between the Tuatha Dé Danann and the Nephilim. According to ancient astronaut theorists there are telling signs in the stories of druids and the strange megalithic structures found around the world, including the legends about giants of native American peoples, where it is said that these giants had red hair and light eyes and arrived in America from great distances, many centuries before Europeans at the time of the discoveries.

Although these mythological beings are still respected and feared by many in the Irish countryside as real and even dangerous beings, they have become the subject of modern fairy tales for most people.