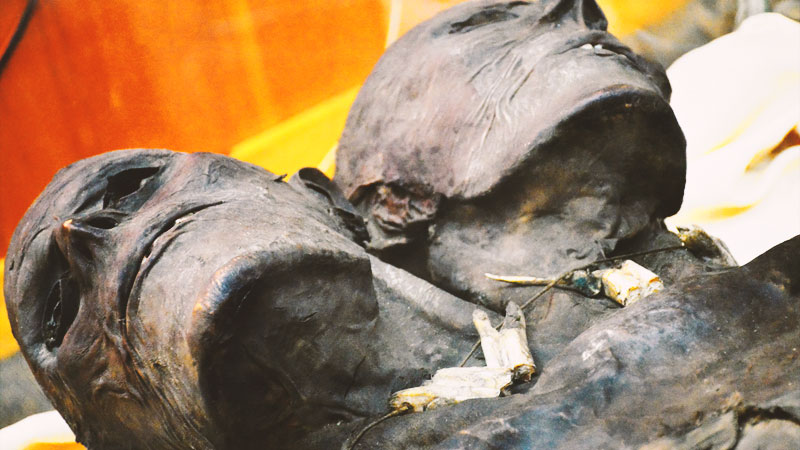 According to legend, the Giant Kap Dwa was captured in Patagonia, a region of the extreme south of America, by Spanish sailors in the year 1673 and, according to reports, the giant was worshipped by the natives.

After his capture, the Spanish conquerors tried to keep him trapped inside the ship, but in an escape attempt there was a struggle and the giant was reportedly killed with a spear in his chest.

Although what happened next is not completely clear, Kap Dwa’s body is believed to have been mummified and transferred to England in the 19th century, remaining an attraction in several circuses.

After being exhibited for more than 45 years in England, Kap Dwa was reportedly bought by Thomas Howard and resold several other times, ending in the rarity collection “The Antique Man” owned by Robert Gerber in Baltimore, USA, where it remains to this day.

In human history, the tallest man in the world officially recorded was Robert Wadlow, 2.74 meters tall and known as “The Giant of Illinois”.

So physically there is the possibility that a human may have this height and regarding his two heads, there were already reports of Siamese twins at that time.

However, Kap Dwa was not the only giant mentioned in the 17th century.

Dutch captain Sebalt de Weert described an incident he suffered with his crew while sailing through the Strait of Magellan, also in South America, situated between the mainland and the Fireland archipelago, around 1600.

Sailors witnessed a race of reddish brown-skinned giants and long hair that approached the Dutch ship in seven huge rowboats. The giants appeared hostile, and Captain Weert, believing that his ship would be attacked, gave orders to move away from them, sailing away and avoiding possible combat.

As we can see, the stories of the giants do not only date back to biblical books or stories of civilizations of thousands of years.

One of the first reports on UFOs was reportedly recorded by the Genoese navigator Christopher Columbus in his logbook.