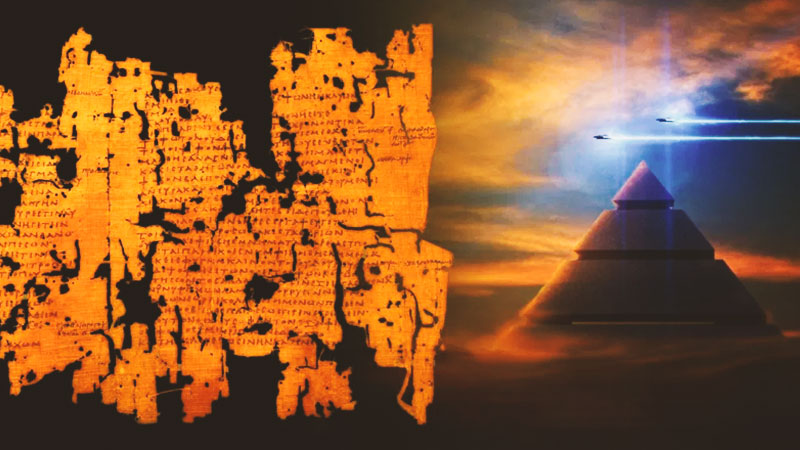 Ancient descriptions and representations of “flying vessels” are found around the world, from cave paintings to the Biblía.

Characterized in different ways, some were pointy or triangular, others were round or spherical, some were red and looked like circles of fire, while others were yellow and spat fire.

Most conventional scientists skeptically contradict these descriptions and representations, considering the ancient inhabitants of Earth as primitive beings, who reported sightings of natural phenomena with excessive enthusiasm or calling these events mass hysteria.

However, the ancient Egyptians are famous for their advanced knowledge and techniques, especially their knowledge of astronomy, which were very advanced compared to any other civilization of that ancient period.

An interesting piece of evidence about ufo encounters from the past is the Tulli Papyrus, an ancient text that speaks of large flying machines spitting fire, which explored the Egyptian sky and then disappeared into space.

The document was discovered in 1933 by the Director of the Egyptian Section of the Vatican Museum Alberto Tulli, from whom the papyrus inherited the name, in an antique shop in Cairo, Egypt.

Many researchers deny the authenticity and meaning of this document that would change our current history as we know it, or at least add an impressive fact about supernatural beings or extraterrestrials.

The event quoted in the Tulli Papyrus was witnessed by the Egyptian pharaoh Tutmés III, who reigned during the 18th Dynasty, and then ordered his scribes to write about what happened so that he would be “remembered forever.”

The strange occurrence occurred around the year 1480 BC and besides pharaoh, he was witnessed by the whole Egyptian army.

Here is the translated text of the mysterious papyrus:

“In the year 22, in the third month of winter, on the sixth hour of the day, the scribes of the House of Life noticed a circle of fire coming from heaven. From his mouth he exuded a foul breath. I didn’t have a head. His body had a rod long and a wide. I didn’t have a voice. He came towards His Majesty’s house. And from that, the scribes’ hearts became confused and they threw themselves face down. So they reported it to Pharaoh. His majesty ordered the scrolls of the House of Life to be consulted and meditated on what was happening.”

Some parts of the papyrus have been damaged by time and others misinterpreted, but most of the text is accurate enough to allow us to understand what happened during that mystical day.

The rest of the text continues as follows:

“Now, after a few days, these things have become increasingly numerous in heaven. Its splendor exceeded that of the sun and extended to the limits of the four corners of the sky. High and wide in the sky was the position from which these circles of fire came and went. Pharaoh’s army watched, with His Majesty at their center. It was after dinner. Then these circles of fire rose higher in the sky and headed south. Fish and birds fell from the sky. A wonder never before known since the foundation of his land. And Pharaoh brought incense to make peace with the earth, and what happened was commanded to be written on the scrolls of the House of Life so it may be remembered forever.”

If it is true, then this document presents a very important timeline in human history, when UFOs made their presence noticed by thousands of people from ancient Egypt, including their ruler.

Even though the text does not mention anything about a landing or physical contact with the strange flying object or beings, it describes a unique encounter, which mysteriously ended when fish and birds fell from the sky as the objects departed.

The ancient Egyptians probably saw this as a divine wonder, a sign of great importance and, at the same time, of great power over life and death.

The Unknown Fate of The Tulli Papyrus

Unfortunately, the original Tulli Papyrus was lost or deliberately hidden, only copies of it remained.

When researcher Samuel Rosenberg asked for a chance to study the original Vatican document, he received the following response:

“Papyrus Tulli is not owned by the Vatican Museum. Now it’s scattered and no longer traceable.”

It is speculated that the Vatican has some of the most valuable documents in human history. If that is the case, it is understandable that they have chosen not to reveal this papyrus of great importance.

Other attempts to study The Tulli Papyrus were made, but to no avail. Including a request was sent to Dr. Walter Ramberg, a scientist who worked for the U.S. embassy in Rome, who replied:

“The current Director of the Egyptian Section of the Vatican Museum, Dr. Nolli, said that Professor Tulli had left all his belongings to a brother, who was a priest at the Lateran Palace. Presumably, the famous papyrus went to this priest.”

Unfortunately, the priest also died and his belongings were divided among the heirs, who may have even dismissed the papyrus as something of little value, not knowing the historical importance of this document.

It is unlikely that the Vatican has let a document of such importance slip out of its hands, but assuming so, we can only expect someone to smite into it in an antique shop as happened to Alberto Tulli.