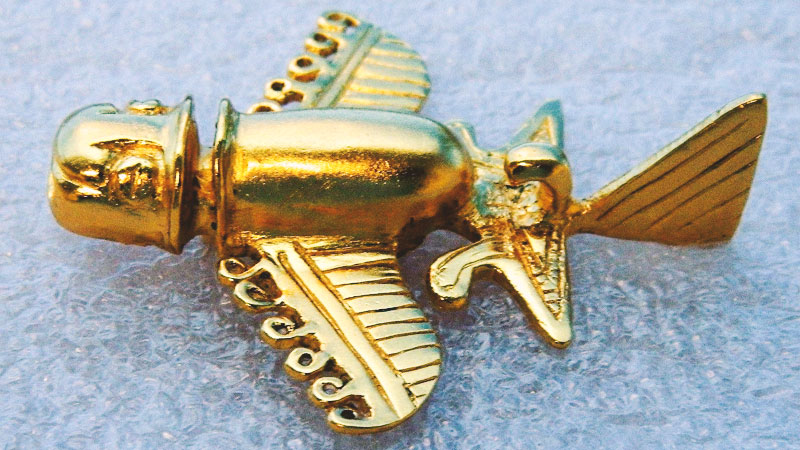 The strange artifacts are part of the collection of the Museum of Gold in Bogotá. They were found in northern Colombia and belong to the Quimbaya culture, which dates back to the end of the first millennium of our era.

The Quimbaya were an indigenous culture of South America known for their production of magnificent and high quality gold pieces.

The dozen objects in this collection measure from 2 to 3 inches (5 to 7,5 cm) each and were worn as a pendant on a chain around the neck.

Mainstream archeology describes these artifacts as depictions of birds, lizards, amphibians, fish and insects common to that region and period, some of them highly stylized.

But some of these artifacts were interpreted by Ancient Astronaut Theorists as representations of modern airplanes, and therefore regarded as OOPARTs, the artifacts out of place and time.

OOPART is an acronym for “Out of Place Artifact” used to describe the dozens of prehistoric objects found in various places in the world that seem to present a level of technological advancement incongruous with the time they were made.

In 1954, the Colombian government sent part of its collection of gold artifacts from the Quimbaya culture to be displayed in some museums in the United States.

During the exhibition, Emanuel M. Staubs, one of the country’s leading jewelers, was hired to make reproductions of the golden pieces, and fifteen years later, one of the copies was delivered for analysis to biologist and researcher Ivan T. Sanderson, founder of the Society for the Investigation of the Unexplained, in the United States.

After conducting a thorough examination of the artifact and consulting with several aerodynamic experts, Sanderson came to an incomprehensible conclusion: the golden object was a model of a jet plane that was at least a thousand years old.

Although the Colombian government, in the absence of a better explanation, describes the discovery as “zoomorphic”, an object shaped like an animal, from a zoological point of view, however, both biologist Sanderson and Dr. Arthur Poyslee of the Aeronautical Institute of New York concluded that the object did not represent any known type of winged or finned animal, like bird, bat, insect or otherwise. In fact, the small Colombian artifact has more mechanical than biological characteristics.

Aircraft designer Arthur Young noted that among the most important features are the deltoid-shaped front wings, and if the golden object represented a flying animal, the front wings would be located in the wrong place. They are far behind the body to match the animal’s center of gravity. However, the wings are in the aerodynamically correct place for a jet plane.

Test pilot and aerodynamics expert Jack A. Ullrich confirmed Young’s analysis and said that the delta shape of the front wings and the aerodynamic taper of the fuselage implied that the original plane was jet-powered, with the ability to fly at supersonic speeds.

After examining frontal-angle photos of the small artifact, another aeronautical engineer, Adolph Heuer, noted a third indication of the original aircraft’s performance potential. While most modern aircraft have slightly upward-sloping wings, only the most powerful aircrafts have downward-sloping wings.

Another indication that the artifact does not represent an animal is its tail. It has a triangular shape, flat surface and rigidly perpendicular to the body. No bird or insect has a vertical tail like this. Only fish have something similar, but they all have a lower fin that serves as a counterweight. Instead, the small model’s triangular configuration is a standard feature on modern aircraft.

In 1994, German model airplane experts Peter Belting and Conrad Lubbers created replicas with the exact proportions of these objects and equipped them with engines and a radio control. Incredibly, they discovered that these golden “birds” were actually capable of flying with ease and even performing aerial maneuvers.