Início English The Stone Warriors of the Inca God Viracocha 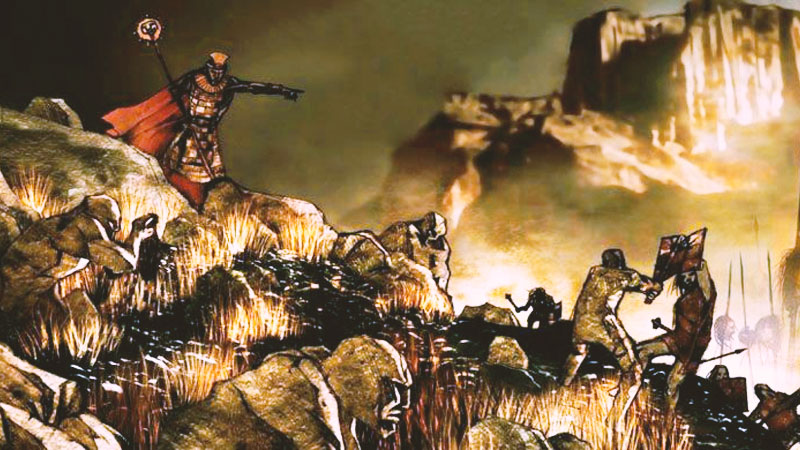 The Pururaucas warriors, or stone soldiers, are part of a legend that chronicles the victory of the Inca army over the Chanca army in 1438.

Andean legend speaks of a battle where the Incas, outnumbered by a terrible enemy, invoked their greatest deity, the god Viracocha, who responded to his call by turning stones into soldiers, helping the Incas defend their city, causing the enemy to retreat from fear and thus saving their people.

The Incas’ conflict with the Chancas is perhaps the most well-known and decisive episode in the history of the Andes.

In 1438, Hanan Chanca Anccu Hualloc gathered more than 40,000 soldiers to conquer the city of Cuzco, destroying everything in its path and finally surrounding the city.

Legend has it that inca ruler Hatun Tópac and his son, Crown Prince Urco, cowardly fled the capital, abandoning their people in the face of the imminent arrival of Chanca’s powerful army.

Anarchy reigned until the young Prince Pachacutec, Urco’s younger brother and the second in the line of succession, courageously led a resistance.

The young prince recruited a small army to defend the city from enemies, but no one wanted to join them except the Cane group.

Faced with this adversity, the prince turned to the gods, crying out for Viracocha, the most powerful of the Inca gods, who answered his prayers during a dream, telling Prince Pachacutec that he would send soldiers to help in the unequal struggle and promising a crushing victory for the Incas.

The day after the dream, the Chancas are in Morro da Carmenca predicting an easy conquest, and as their army advances, the unexpected happens: the surrounding stones begin to turn into warriors who attack the Chancas from all sides, forcing them to retreat.

Just as the god Viracocha had promised the prince in his dream, the Incas, motivated by this divine intervention, win the battle, and when Chanca’s army withdraws, the mysterious stone soldiers return to their original form.

Later, several of the rocks that had “come to life” would be taken to different temples and venerated as sacred idols Huacas.

Mainstream scholars believe that the Pururaucas stone soldiers were only part of an intelligent strategy developed by the young prince, which consisted of disguising piles of stones in soldiers and placing them in such a way that the Chancas thought the Incas had a much larger army.

Other historical sources suggest that many of the local ethnic groups, who initially refused to participate in the conflict, waited, hidden among the stones, to see which side would be at the advantage on the battlefield to then join the fight.

But according to Inca reports, the Chancas were fierce and extremely violent enemies. They were great and brave warriors, so it is very difficult to believe that they have withdrawn from the battlefield thanks to a handful of stones dressed as soldiers.

Something much more powerful must have happened to push Chanca’s great army back.

Is it possible that Viracocha, which many authors mention as an ancient alien god, created, in fact, a miraculous army that helped the Incas defend themselves against Chanca’s powerful army?

Viracocha is described as “The Creator”, also referred to as The Old Man of Heaven, Lord and Master of the World, having several similar characteristics with the Kukulcán gods of the Mayans, Quetzalcóatl of the Aztecs and Oannes of the Sumerians, and for having created the Earth, animals and humans and being the possessor of all things, the Incas worshipped him, without offering him sacrifices or tributes. He created, destroyed men, and raised them again from the stone.

At the same time, he is also described as a more mundane mythical hero, known as the “god of the staff”, who brought knowledge and taught humans various techniques and crafts and then set off on a vessel made with his cape.

These Inca chronicles report that Viracocha was a man of average stature, white, wearing a white dress and always had a staff and a book on his hands.

According to historian Pedro Sarmiento de Gamboa, there was an occasion when the residents of the city of Caxha, bothered by his “strange clothes and size”, decided to kill Viracocha:

“They had already stood up in arms, when Viracocha, knowing his wicked intentions, knelt in a flat area, raised his hands and looked up at the sky, and from above rained fire on those who were on the mountain and everything was burned like straw. Terror took over from the wicked persecutors before that terrible fire, and they ran to where Viracocha was, throwing themselves at their feet in search of forgiveness. Viracocha, conquered by compassion, went to the fire and put it out with his staff. But the mountain was burned and the stones became so light with the result of the enormous heat of the fire that a man could now easily carry something that normally could not be transported by a wagon.”

Is this staff ported by Viracocha a high-tech instrument, as powerful as the one Moses used to summon Jehovah and intercede for his people, ravaging the Egyptian lands with terrible plagues?

Like the God of the Hebrews, Viracocha managed to have his people chosen from the Incas and protect them from the Chancas with a technology capable of avoiding stones and using them as projectiles. It is logical then to think that the bloodthirsty chancas fled by witnessing this “magic” that exceeded not only their military capacity, but also their ability to understand.

Dogons and Nommos: The African Tribe and the Visitors from Sirius

All around the world there are cultures and rituals that show so much knowledge that raise questions that still need many answers.