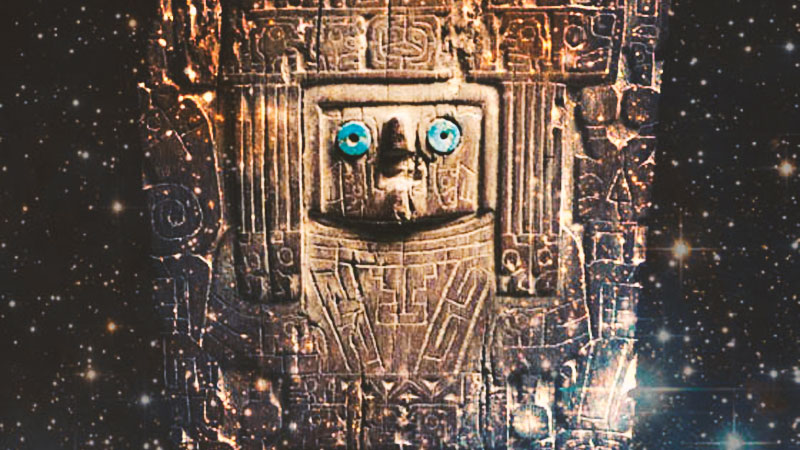 For some, the oldest civilization of the planet, for others, Plato’s Atlantis, for the official history, the culture that gave rise to the Inca civilization and for Ancient Astronaut Theorists, further hard-hitting proof of the Anunnaki’s presence in Latin America.

Determined to recover its archaeological heritage, Bolivia organized in 2013 the Huiñaimarca Project, which in the Aymara language means “Eternal People”. The project investigated the Tiahuanaco culture on the shores of Lake Titicaca, where Belgian archaeologists found about 2,000 archaeological pieces rescued from the depths of the lake.

The new evidence indirectly confirms several hypotheses about the relationship between the extraterrestrial gods known as Anunnaki and the Tiahuanaco culture.

Although there have been several previous underwater exploration missions on Lake Titicaca, the Huiñaimarka Project was the first underwater excavation mission, and among the rescued objects are bones, gems, ceramics with depictions of felines, silver pieces, fragments of laminated gold and a rudder and anchor belonging to a pre-Hispanic ship.

Some of the pieces were dated from the Inca period, others from the pre-Inca period and some from the year 500 AD. According to the project leader, belgian archaeologist Christophe Delaere, these are the first pieces of gold found in Lake Titicaca:

“We found an important archaeological material, typical of the Tiahuanaco and Inca cultures, and also material of the 19th and 20th centuries. In other words, we have 2,000 to 2,500 years of history here. These are the first pieces of gold we found. Also a rudder and an anchor that would be from a pre-Hispanic boat.”

The official version is that several of the pieces found are offerings that the ancient inhabitants of the Tiahuanaco culture threw in Lake Titicaca, which they considered sacred. These pieces show that before the arrival of the Spanish there was a great cultural and commercial exchange between the civilizations of the region.

However, the most interesting thing is that in this discovery there are several details that indirectly support alternative theories, especially author Zecharia Sitchin, about the contact between the Anunnaki and the Tiahuanaco civilization.

Christophe Delaere confirms that this is the first time gold pieces have been recovered in the depths of Lake Titicaca, and Bolivian archaeologist Marcial Medina Huanca attests that the ornaments and iconography that the gold plates present belong definitively to the Tiahuanaco culture.

The 31 pieces of laminated gold found by the underwater archaeologists of the Huiñaimarka Project indirectly confirm zecharia sitchin’s theories.

According to Sitchin, around 4000 BC, Enki, one of the leaders of anunnaki mining operations on planet Earth, decided to invite his father, King Anu, to visit the most important Anunnaki metallurgical plant on the planet: Tiahuanaco.

As part of preparations for the arrival of King Anunnaki, it was decided to cover most of the architectural structures of the city of Tiahuanaco with gold leaf that reflected the greatness of anunnaki metallurgical operations.

Zecharia Sitchin developed this theory based on the discoveries of Austrian archaeologist Arthur Posnanky, who found and photographed small round holes in several blocks of polished stone from Tiahuanaco.

According to Posnansky, at some point in its history, the city of Tiahuanaco had been covered with gold leaves that were trapped by small gold nails that fit into these stone holes. In 1943, Posnansky presented to the Geographical Society of La Paz a block of stone extracted from Tiahuanaco that had five gold nails in small orifices.

Although Posnanky spent more than forty years studying the archaeological remains of The Tiahuanaco culture, made surprising discoveries and invested much of his fortune in the study of these ruins, traditional archaeology has always considered him an amateur archaeologist, although his topographic letters, made in 1904, are still used as a reference for traditional archaeology to this day.

These laminated gold coins open new horizons because they confirm that the Tiahuanaco culture has developed techniques for working gold. That is, Zecharia Sitchin’s theory about the Anunnaki who installed a metallurgical plant in Tiahuanaco and who, at some point, covered the city with gold slides, has new evidence that, although not direct and definitive, joins other evidence that shows that ancient history needs a review.

The Submerged Secrets of Lake Titicaca

In 1966, a group of Argentine divers led by Ramón Avellaneda found a paved path about 30 meters long, seven buildings about 5 meters wide and 10 meters long u-shaped, with the open part pointing to the center of the lake and twenty two parallel walls. The discovery was made at a depth of seven meters near Puerto Acosta, a Bolivian town on the shores of the lake, located near the border with Peru.

A few years later, inspired by the history of Argentine divers, the French explorer Jacques Cousteau took advantage of one of the voyages of his famous ship “Calypso” to dock in the port of Mollendo and be transported by train to Bolivian heights in order to carry out a series of underwater explorations. The result of these explorations was shown in the documentary “The Legend of Lake Titicaca”.

Hugo Boero Rojo, a renowned Bolivian academic who studied pre-Columbian cultures, announced in 1980 that he had found archaeological remains of submerged architectural structures 15 meters deep in Lake Titicaca. The discovery was made at the same site where Argentine divers found the U-shaped buildings near Puerto Acosta.

“Now we can say that the existence of pre-Columbian buildings under the waters of Lake Titicaca is not a mere assumption or science fiction, but a real fact. The remains found show the existence of ancient civilizations long before Spanish colonization. We find temples built with immense blocks of stone with paved paths that lead to unknown places and steps of stairs whose bases are lost in the depths of the lake among dense vegetation of algae,” Hugo Boero Rojo said at a press conference.

One of the explanations for these stone walls, temples and paths found by different underwater expeditions in the lake is that these structures were built before the formation of the lake or when the lake was smaller.

Traditional archaeology states that the city Tiahuanaco was built around 1500 BC, based on carbon 14 analyses of organic matter found near stone buildings, but C-14 cannot date the age of stones or determine when they were carved or modified. This date of development of the Tiahuanaco culture fails to explain the continuous discoveries of submerged ruins under the waters of the lake.

Arthur Posnansky, Graham Hancock and other researchers say the Tiahuanaco structures were erected around 15,000 BC, before the flood occurred at the end of the last Ice Age.

This great flood would have expanded Lake Titicaca and completely flooded the city of Tiahuanaco. Some more solid parts of the city, such as the so-called “Puerta del Sol” survived the floods and others collapsed and were submerged.

These structures, such as the Kalasasaya Palace, puerta del sol, akapana pyramid and Puma Punku complex would have been erected before this flood that ended up covering them with almost two meters of mud and submerging into the depths of the lake the buildings of Tiahuanaco, covering the most significant traces of the Anunnaki presence, leaving standing only the largest monuments and statues that survived until our time.

After the flood, the lake’s water would have become almost stagnant thanks to the geography of the region, gradually decreasing over thousands of years.

One of Arthur Posnansky’s most important hypotheses is that the city of Tiahuanaco was the birthplace of American culture, built amid the antedilviana ice age, around 15,000 BC. Posnanky based his hypotheses on a series of archaeological findings and calculations.

Posnansky suggests that when Tiahuanaco was built, Lake Titicaca bordered the city limits. That is, Tiahuanaco would have been built on the shores of Lake Titicaca and the strange structures that today are scattered throughout the archaeological complex of Puma Punku were part of the pier of the port of the city.

At first glance, Posnansky’s theory makes no sense, because today the remains of the Tiahuanaco culture are 22 kilometers from Lake Titicaca.

The discovery of a rudder and an anchor that, in a first analysis of archaeologists from the Huiñawasi project, would belong to a pre-Hispanic vessel, could shed new light on Posnanky’s theories.

If these two pieces are identified as belonging to the Tiahuanaco culture, new perspectives and visions may be opened about the true history of the origin of civilization in Peru. If in the past Lake Titicaca were connected to the Pacific Ocean by means of a navigable river or some stretch of water, as Posnansky claims, this could help answer some of the most important questions anunnaki theory faces.

According to Sitchin, the Anunnaki traveled to our planet in spacecrafts, taking advantage of the opportunities in which the orbit of their planet Nibiru approached Earth every 3,600 years. From this we can assume that they did not have the technology or fuel necessary for long journeys in short periods or fuel to travel from one side of the planet to another, leaving the Anunnaki spacecraft only for space exploration trips and to transport the machinery and personnel needed for the initial stage of planetary colonization.

Once the Anunnaki settlement was established on the planet, the movement within it could be carried out using the means offered by the planet, in our case seas, rivers and lakes and the site where the city of Tiahuanaco was built may have been discovered by the Anunnaki explorers who would have crossed the planet by sea in search of more suitable locations to establish their mining operations , bringing his African and Sumean followers from the Mediterranean region to the coast of the Americas, where they had contact with the Olmecs, Mayans and other cultures.

Shipping could have offered valuable advantages such as the possibility of exploring the seabed in search of minerals during long journeys and the ease of transporting a large amount of manpower, Anunnaki and human.