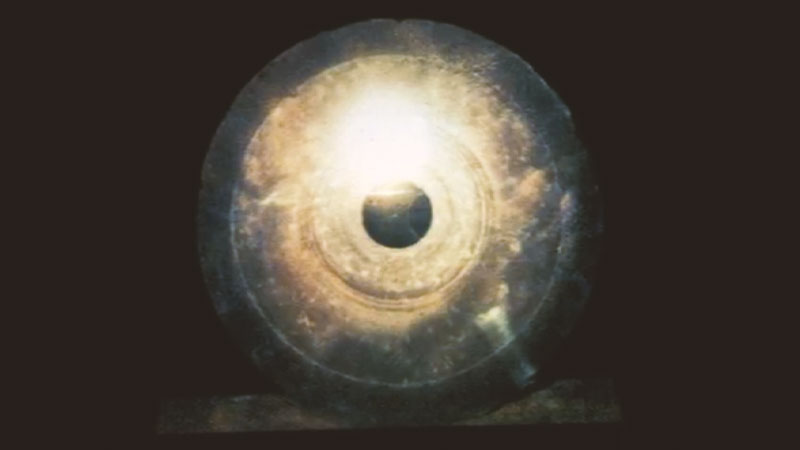 The discovery of the Dropa Discs was made in 1938 when archeology professor Chi Pu Tei of Peking University and his students were on an expedition to explore a series of caves in the Bayan-Kara-Ula Mountains near Tibet.

In a group of isolated caves, ancient tombs were discovered that contained strange humanoid skeletons that measured only 1.3 to 1.5 meters (4 to 5 ft.) in height, and the skeletons had unusually large heads for their small, fragile bodies.

The caves themselves were quite unusual as they appeared to have been artificially carved out of a series of underground tunnels and chambers. The cavern walls were square and glazed, as if the rock had been cut using extreme heat. Embossed images of the rising sun, moon, stars, earth, mountains, and dotted lines that connected the earth with the stars were carved into its walls.

A total of 716 tombs were found containing the strange tiny skeletons and, to add to the mystery, in each of the graves was a curious stone disc. Each measured about 30 cm (1 ft.) in diameter and 6 mm (0.23 in.) in thickness, with a 20 mm (0.78 in.) hole in the center and its surface was covered with fine grooves.

The mysterious discs and other items found during the expedition were taken to Peking University and, after examination, it was concluded that they were made of lithium and granite, and contained a high concentration of cobalt and other metals with magnetic properties, rare elements on Earth, but commonly found in meteorites. The discs have been dated to about 12,000 years.

In addition, recordings were found on the discs, with microscopic inscriptions of a type of hieroglyphic of unknown origin, which lay within the thin grooves that spiraled from the rim to the central hole, similar to a modern vinyl record.

The discs were carved to a very high level of precision from granite and it is hard to imagine that such an ancient civilization could have made them with primitive tools.

Attempts by Professor Chi Pu Tei and his students to decipher the inscriptions or determine the purpose of the stones proved fruitless, and regardless of the research results, the professor was banned from publishing his findings by the Chinese government.

Over the years, many of the records have quietly disappeared on the black market and into private collections, but most of them ended up in the archives of Peking University.

In the late 1940s, a Polish university professor showed one of the strange stone discs in his private collection to Dr. Karyl Robin-Evans, a British scientist. The professor said he had bought the disc in northern India, and that it belonged to a mysterious Tibetan people known as the Dzopa, who used the stones in religious or magical rituals.

Dr. Karyl Robin-Evans was quite intrigued and decided to go to Tibet, where he assembled an expeditionary team to explore the Bayan-Kara-Ula region. However, the expedition proved quite challenging. Their Tibetan porters, knowledgeable in local legends, were very afraid of the remote area and the mysterious Dzopa people.

After a long journey and abandoned by most expedition members, Dr. Robin-Evans eventually managed to find in the Bayan-Kara-Ula Mountains a race of small, primitive people, who called themselves Dzopa, but his biggest challenge proved to be communication.

Over several months, Dr. Robin-Evans, with the help of a Tibetan linguist who was part of the expedition, managed to learn enough of the Dzopa language to initiate meaningful dialogue and understand the stories told by the shaman Lurgan-La.

The Dzopa tradition tells that they come from a place in the Sirius Star System. An exploration mission had been sent to Earth 20,000 years ago, and a second expedition came 8,000 years later, but during this second expedition, an accident occurred that destroyed the ship and the survivors were stranded, unable to leave Earth, and the tribe of the Dzopa consider themselves their descendants.

The results of the expedition were published in the book “Sungods in Exile: Secrets of the Dzopa of Tibet” by Dr. Robin-Evans, released in 1978.

Over time, the name Dzopa (or Tsopa) became the popularized version Dropa.

In 1958, another Chinese professor, specialized in linguistics, now known as Tsum Um Nui, began to examine the discs and concluded that each groove consisted of a set of small hieroglyphs of unknown origin.

The rows were extremely small and a magnifying glass was essential to see them clearly, but many of the hieroglyphs were worn down by the erosion of time.

The professor was able to partially decipher the hieroglyphics on the stone discs and translate their meaning which revealed the story of an alien encounter, where an ancient extraterrestrial spacecraft crashed on Earth some 12,000 years ago and suffered irreparable damage, trapping its occupants on this planet. The surviving men, women and children had to hide in the caves as they were being hunted and killed by humans who regarded them as hostile invaders. Another part of the text talks about the regret of the mountain dwellers (Tribe of Ham) when they finally managed to understand the sign language used by the Dropa and realized that their intentions were peaceful.

Initially the professor was banned from publicizing his work, but in 1962, after numerous appeals, he finally received permission from the Beijing Academy of Sciences to publish his report.

Unfortunately, the Academy was correct in assessing the impact of the allegations. The professor has been the target of ridicule by mainstream archaeologists around the world. Embarrassed by the implications against his credibility, the professor left China, adopted the name Tsum Um Nui and went into exile in Japan, where he died in 1965.

In 1974, Austrian engineer Ernst Wegerer was visiting the Banpo Museum in Xian, China, where some of the discs matching the descriptions of the Dropas Stones were on display.

When questioning the museum curator about the discs, he could not say anything about it, however, he allowed Wegerer to take them in his hand and photograph them with his Polaroid camera.

Upon returning to the museum in 1994, the records and the curator had disappeared without a trace.