Início English What is the True Age of the Giza Sphinx? 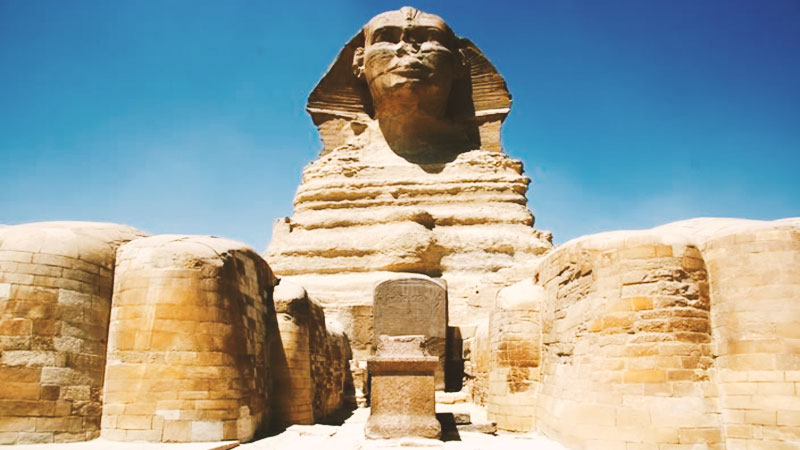 The Sphinx of Giza was carved into a single block of limestone and is the largest in the world with these features, 73 meters long, 19 meters wide and 20 meters high, and although currently the Sphinx has a shade of sand, there are indications that in the past it has been colored.

It is reported in a granite plate located between its paws, around the year 1400 BC, Pharaoh Twemes IV heard the voice of the Sphinx in a dream. She told him that if he unearthed her, he’d be a great king.

This was the first attempt to expose the body of the Sphinx completely, however, pharaoh only managed to dig up his paws. Only between the years 1925 and 1936 a major operation removed all the sand that covered the body of the sphinx.

Traditional archaeologists determined that the Sphinx was built between the years 2558 and 2532 BC, but many independent researchers insist that the imposing limestone statue is much older than archaeologists and Egyptologists claim.

In 1992, John Anthony West shook the scientific community with his claim that the Sphinx was carved 10,000 years earlier, in a period before Egypt became a desert. West and other researchers have argued that academics have forgotten one important detail: the body of the sculpture has distinct marks of water erosion.

After his assessment of the age of the Sphinx, West found other scientists who shared his observation about the discovery of a story totally different from the one that was commonly accepted.

West’s search led Boston University geology professor Robert Schoch to conduct innovative research into the origins not only of the Sphinx, but of the entire region, as well as its implications for the origin of humanity.

Schoch explains his first encounter with the figure in the 1990s, at which point he immediately realized that there was a disconnect between academically accepted dating and what the facts pointed out. After careful inspection, Schoch realized that the Sphinx survived intensely humid weather conditions that contrast with the now arid conditions of the Sahara Desert.

Professor Schoch concluded that academics neglected signs of erosion caused by heavy floods that were unusual on the Egyptian plateau 5,000 years ago, but could have occurred between 10,000 and 12,000 years ago during the end of the last Ice Age that would have caused the flood and rising ocean levels worldwide. For Schoch, this was an exciting discovery, but conventional science received it with skepticism and denial.

Researcher Graham Hancock also talks about the age of the Sphinx, noting that the statue appears to have been exposed to about a thousand years of heavy rains, a fact that did not occur in that area during the time of the pharaohs, or for thousands of years before. Hancock believes the Sphinx needs to be placed at least 12,500 years ago.

What is the True Age of the Sphinx?

A particular erosion mark appears in a large cavity of the Sphinx and corresponds to the water level of the early Pleistocene era. From this evidence, geologists concluded that the statue was already on the Giza plateau at that time.

According to Manichev and Parkhomenko, a natural mechanism could explain the ripples and mysterious features of the Sphinx: the impact of waves on rocks. This process produces a wear of the rock, a fact that can be observed in these cavities in the Sphinx and made Ukrainian scientists think that this monument could have been affected by immersion in large bodies of water, and not in the regular floods of the Nile.

Manichev and Parkhomenko are firmly convinced that the back of egypt’s Sphinx has been submerged for a long time under water and, to sustain this hypothesis, they point to the existing geological studies of the Giza Plateau. According to these studies, at the end of the Geological Pliocene period, between 5.2 and 1.6 million years ago, seawater entered the Nile valley and gradually caused major flooding in the area.

Surprisingly, this fact became evidence that the Sphinx could be up to 800,000 years old, when the Mediterranean Sea was reaching out to southern Egypt, passing through the Giza Plateau, and this would explain the distinct erosion marks of the Sphinx, caused by seawater hitting it over thousands and thousands of years.

Some might say that the theory proposed by Manichev and Parkhomenko is too extreme because it puts the Sphinx in an era when there were no modern humans, according to currently accepted evolutionary standards. Among them, author and researcher Andrew Collins suggests that although this rock formation may have been eroded by the Mediterranean Sea, the royal statue may have been carved at a much later date. In short, the rock is ancient, but the statue is relatively less ancient and impossible to be dated by current technology.

Egyptian engineer Robert Bauval states that there are no inscriptions in the Sphinx, carved on a wall or stele, and neither are there papyri that associate the statue with the period of the pharaohs of ancient Egypt to confirm why and who carved the great monument.

The Sphinx continues to be restored from constant erosion and remains a fascinating and enigmatic landmark of the ancient past, but it seems clear that traditional Egyptologists remain steadfast in refusing to reevaluate this artifact of antiquity, as this could mean the rewriting of the narrative of World History.