Início English The Tunnel Network Below the Giza Plateau 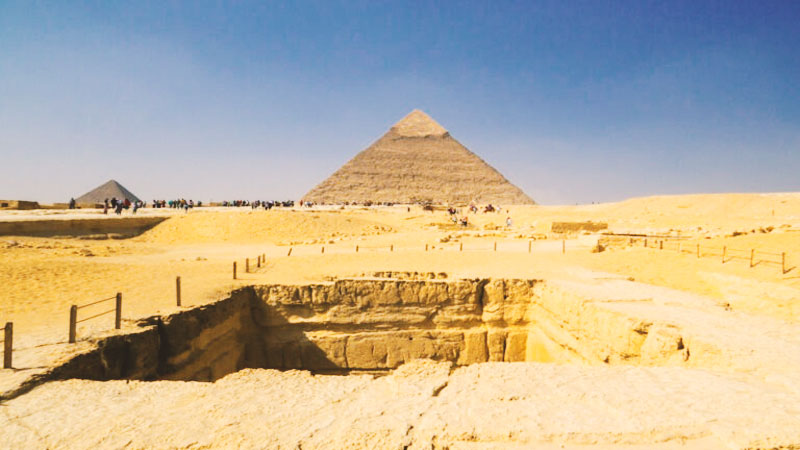 Near the egypcian city of Cairo lies one of the oldest and most attractive sites in human history: the three main pyramids of Giza that came to represent one of the most famous ancient civilizations.

The megalithic stones that form these structures sit on a large plateau, and now researchers have discovered something else fascinating that lies beneath the pyramids.

Researcher Gregg Braden explains that some of the first beareble accounts of the Giza plateau come from the Greek historian and geographer Herodoto who in the early 400s BC compiled a reference book on civilizations, cultures and ancestral technologies.

Before Herodoto, no one had presented a systematic and complete study of the past, trying to link events to how they shaped history.

Herodoto speculated that there were passages hidden under the pyramids, as well as chambers, labyrinths and large spaces, all created when egypt’s climate and topography were very different from what it is today.

He realized that beneath the pyramids were the remains of other much older civilizations, and if Herodoto is correct, the pyramids may be settled on the most incredible “time capsule” in history, revealing not only long-lost cultures, but also their technologies and origins described in the early texts and images created by mankind.

Two researchers stand out in the search for the discovery of these underground spaces under the pyramids: the British Consul General Henry Salt and the explorer Giovanni Battista Belzoni.

These men were able to research the area with the limited technology of their time in the early 1800s and were led by the topography of the desert to an area on the edge of the Giza Plateau, an important archaeological discovery that was called “The Tomb of Birds”.

This discovery was almost lost in history, but was rediscovered in 2008, when author and researcher Andrew Collins read Henry Salt’s 1817 diary and suggested that the Tomb of birds was a tribute to a guardian of the hidden records and perhaps this place, a few steps from the pyramids, is one of the entrances to the underground world beneath Giza.

With the help of British Egyptologist Nigel Skinner-Simpson, Collins brought new light to Henry Salt’s exploration of the Giza plateau that may be the key to the discovery of this treasure trove of lost knowledge, and modern science supports Collins’ claim thanks to satellite images, revealing an underground passage way between the Tomb of birds and the second pyramid, called Pyramid of Quéfren.

According to translations of ancient Sumerian tablets by researcher Anton Parks, there were seven levels of caves below the Giza plateau. This underground system was inhabited by ancient Egyptian gods known as the “Clan of Osiris”.

Parks’ research found that before these “extraterrestrial gods,” another lion-headed extraterrestrial species known as “Urma” came to Earth and inhabited this underground infrastructure. The remnants of this species can be seen in the Sphinx and Sekhmet, the Egyptian goddess depicted with the head of a lioness who has the warmth of the sun as its main power.

Parks says these seven levels were huge and initially carved by the Mediterranean, which engulfed Egypt thousands of years ago.

The first level was inhabited by prisoners and people from the Egyptian court. The second level was where an underground tributary of the Nile ran and where the gardens were kept. In the third level lived the hybrids and their gods, as well as humans dedicated to hybrid descent. The fourth level housed the royalty of the Egyptian gods, and the final levels housed the technology that created the artificial atmospheres and generators that provided power for the entire infrastructure.

As all these mysteries, only time will tell the truth and reveal what has long been suspected about the underground system of tunnels, caves, chambers and treasures hidden under Giza. With the advancement of technology, in the future we may be able to investigate lost worlds far below the surface of the pyramids.