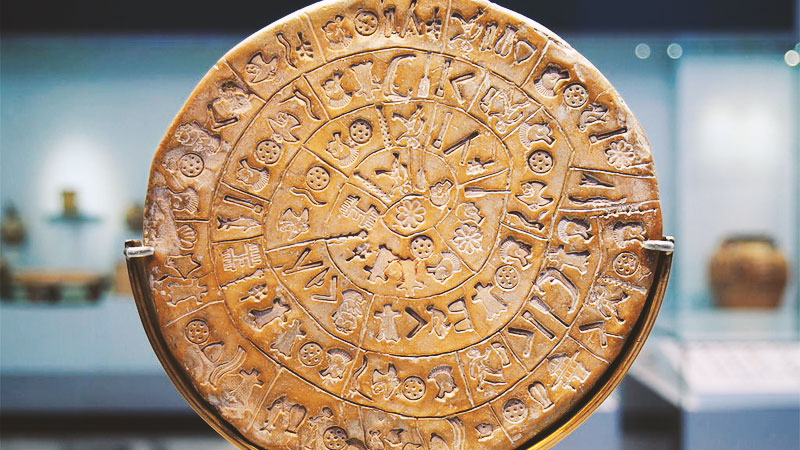 This unusual discovery was made in 1908 in an underground temple connected to the ancient Minoan Palace of Phaistos, on the southern coast of Crete Island.

Archaeologist Luigi Pernier removed the enigmatic disc from a layer of black earth that allowed the artifact to be contextually dated between 1850 and 1600 BC.

Although there has been some controversy over the authenticity of the album, it is believed to be genuine and is currently on display at the Heraklion Museum in Crete, Greece.

The so-called Phaistos Disc is made of clay and is approximately 15 centimeters in diameter and 1 centimeter thick with symbols printed on both sides.

The 45 enigmatic symbols that make up each side of the disc are arranged spirally and separated by groups, were recorded by pressing preformed characters on soft clay, which would make this the first recorded use of mobile types, similar to the press created by the chinese Bi Sheng in the year 1040 and then parallel developed and popularized in the west by Gutenberg in 1439.

The fact that someone has gone to the enormous work of making a matrix for each symbol suggests that the disc, or at least its inscription, could have been mass-produced, although nothing like it has been found so far.

This mysterious artifact is considered a unique piece and no other item has a similar writing system, which is completely different from the other three forms of writing found on the Bronze Age Island of Crete.

The meaning of these symbols has never been translated in a way that is acceptable to both traditional archaeologists and linguists.

Academic attempts to decipher pictograms have little chance of success unless more examples of the signals appear somewhere, as there is not enough context for meaningful analysis. Any translation without external confirmation, such as a successful comparison with other entries, will probably not be considered conclusive.

The language of the disc is believed to be similar, but earlier, to the cuneiform writing of the sumerians found in the Kharsag Epics, considered the oldest religious text in the world, dating from about 2500 BC, and this could be evidence of a link between the Sumerian and Cretan civilizations.

Numerous theories have been suggested that the Phaistos Disc could be a hymn, a prayer, a healing ritual, and even a message from Ancient Aliens.

Another recent and quite plausible theory is that the disc is a coded message that has been read and then discarded, being played into the city pits. If that is the case, it would represent one of the first forms of sophisticated cryptography in human history.

The enigmatic artifact appears to represent the Milky Way or another spiral galaxy.