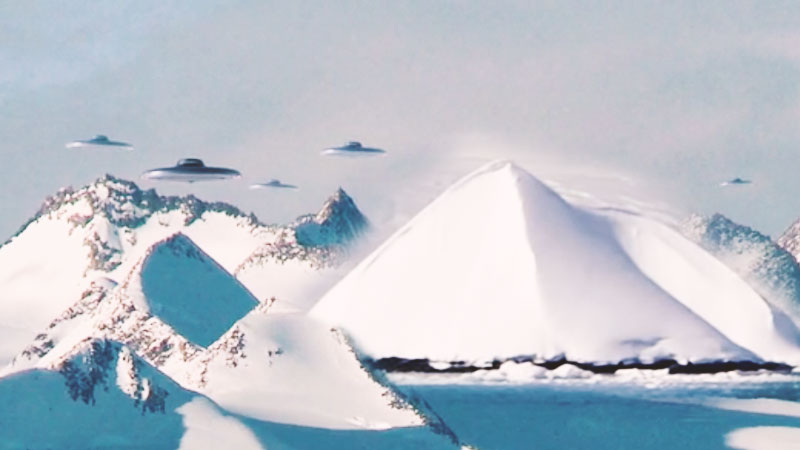 Antarctica is one of the coldest and most inhospitable places on Earth and to say that a civilization could have developed in this region seems absurd, but nevertheless, if you research a little more, you will find that millions of years ago, Antarctica was not covered with snow and ice.

According to Dr. Vanessa Bowman of the British Antarctic Survey: “Go back 100 million years ago, and Antarctica was covered by lush rainforests similar to those in New Zealand today.”

During Antarctica’s long history, the continent has been located further north, enjoying a tropical climate.

What we now see as ice and snow in the distant past were lush green forests, inhabited by a huge variety of ancient life forms.

Jane Francis, professor of Paleoclimatology at the University of Leeds, said in an interview: “I still find it absolutely stunning that Antarctica was once a forest, we consider antarctica to always be a frozen wilderness, but polar ice caps only appeared relatively recently in geological history.”

So if Antarctica was this continent full of jungles and life forms in the distant past, is there a chance that human life could have settled there?

This is something we cannot know for sure, because it is extremely difficult to research Antarctica, expeditions, besides expensive, are very dangerous and without the proper equipment, the human being is not able to survive in the current inhospitable temperatures.

However, given how little we know about life on our planet in the distant past, it is likely that humans have lived on this icy continent and developed as a society, just as they did in Africa, Europe, Asia and the Americas, creating fascinating structures and even pyramids.

Even if this is considered unlikely by traditional researchers, the only way to know for sure the secrets hidden under the ice is by exploring the continent and allowing society to see the results.

In 2009, scientists discovered pollen in samples collected, suggesting the existence of an ecosystem in Antarctica from the past and pointing out that the temperature in summer could reach 20 degrees Celsius.

Another survey, conducted in 2012, identified 32 species of bacteria and microbes, more than 2,800 years old, in samples taken from the bottom of a frozen lake, which proves that, in the distant past, the climate in Antarctica was very different.

The idea that there are hidden pyramids in Antarctica goes back several decades, and although skeptics remain unsure, suggesting that these structures are mere natural formations, satellite images and accounts of people who have been there tell a very different story.

According to researcher Vicente Fuentes, there is in fact at least one pyramid hidden beneath antarctic’s vast ice sheet, and satellite images may be definitive proof of a pyramidal structure located on the continent’s main ridge.

This would mean that, in the distant past, ancient civilizations could have developed on the now frozen continent, leaving behind wonderful buildings, telling the story of a time when our planet was inhabited by different civilizations, omitted by history and leading researchers.

While there are those who believe that formations that have been marked as pyramids are nothing more than natural geological formations, other theorists postulate that Antarctica could be the site of alien secret bases.

A retired U.S. Navy officer and flight engineer made impressive statements in 2015:

“I served with the VXE-6 Squadron from 1983 until I retired in March 1997. As a flight engineer with more than 4,000 hours of service, I witnessed things that most people wouldn’t even imagine existing on the antarctic continent.“

Under the pseudonym “Brian”, the former military man claimed to have seen silver UFOs moving in the skies of Antarctica and a large hole, which served as an entrance to an underground base, occupied and operated in collaboration between extraterrestrials and humans.

“I could keep telling you about more things and situations I observed during my work with VXE-6 Squadron. Discussions among the flight crews were that there was an Underground UFO Base at the South Pole and part of my crew heard conversations from some scientists at this South Pole Base about the Alien Biological Entities (EBEs) who worked and interacted with the scientists at the camp in the ‘The Air Sampling Camp’ area, where the big hole in the ice is”, says Brian.

The informant also described very strange events, especially occurred between 1995 and 1996, in which his team was carrying out many missions, mainly of refueling cargo and personnel exchange.

“We were about 10,000 feet above the top of the Trans Antarctic Mountains and we could all see bright reflections on those silver objects flying around the mountains below. I remember going to my commander and pilot of the plane asking, ‘What are those things down there?’, and he said, ‘Well, they’re not ours. That’s all I can tell you.“

Some flight routes were also considered “forbidden areas” and before each mission, Brian and his team were ordered by senior officers to see something flying, they should not say anything about it.

The presenter of Ancient Aliens, one of the most successful series on the History Channel, tells everything and a little bit more about extraterrestrials.