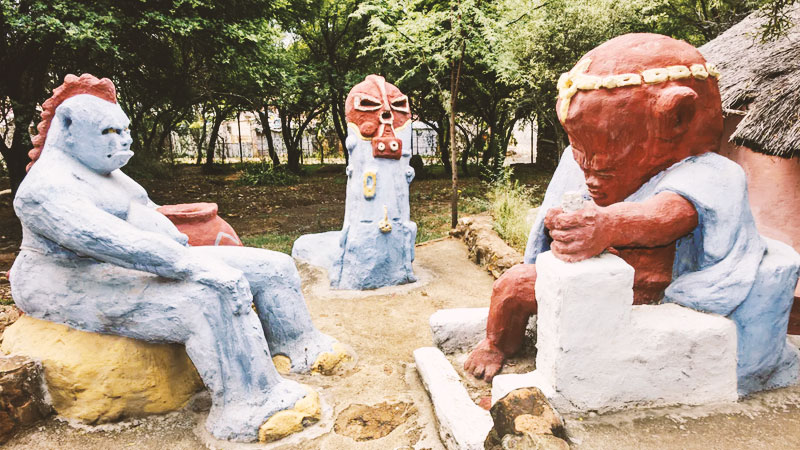 Over millennia, African shamans have preserved the entire ancient history and culture of their tribes through oral accounts passed down from generation to generation.

These stories relate situations very similar to those of other religions and ancient cultures in different civilizations, especially that of the Anunnaki in ancient Sumeria, seen from a different perspective.

Among the most important disseminators of these accounts stands out Vusamazulu Credo Mutwa, a “Sangoma”, or shaman, of the Zulu tribe of South Africa, who became known as the author of several books on African mythology, Zulu folklore and extraterrestrial encounters.

One of these extraterrestrial races are reptilian beings known as “Chitauri”, a word meaning “those who make the laws”.

According to Mutwa, in the early days of humanity the world was covered by a constant fog and people could not see the Sun and the day was just a pale light, at night the stars were not seen and the light of the Moon barely illuminated the night sky.

Humans of this time did not speak, did not have the gift of language, only made sounds similar to those of monkeys and baboons and people communicated through telepathy. Large forests and jungles covered the Earth and people lived in harmony with other animals and nature until one day large flying vessels appeared that eat a terrible noise. They were similar to giant spheres that glowed like gold, much larger than the mountains and emanated fire.

From inside these huge objects came other smaller ones that launched fire and caused winds that lifted a lot of dust and blinded the view. In these smaller objects were the Chitauri, hybrid, humanoide and intelligent creatures, the product of an ancient realization of extraterrestrial genetic engineering.

Mutwa describes the Chitauri as very tall beings, almost 3 meters tall, divided into two classes: royalty, which had horns on their heads, wings and a huge tail, and the warrior class, with large eyes and vertical pupils, round face without horns, without wings and without tail.

These beings were responsible for removing the mantle of mist that existed in the sky and then people could see the stars for the first time.

The Chitauri told humans that they were “the Great Gods of Heaven” and that they were charged with giving them great gifts and gifts. Among these “gifts”, was the loss of their natural mental abilities, humans could no longer use telepathy or their power to travel spiritually with which they could see the past and the future and connect with nature.

These skills were replaced by the ability to speak, with different languages determined by the Chitauri, who also dictated the laws, chose the people who should rule, and punished the disobedient.

The Chitauri forced people to dig the earth for valuable minerals and metals, and thus gold, copper, silver, diamonds and other precious stones were discovered.

With their limited communication, humans began to feel insecure and small groups of the same language built villages with strong wooden fences and created the first tribes and boundaries between territories. With this division, greed was born and each village wanted to be more powerful than the other, and this was only possible through wealth.

According to Mutwa, the Chitauri liked to place humans against humans and were the cause of disputes between the groups, as they fed on this energy of fear and anger that human beings provided them.

As Mutwa explains, since the beginning of time, people believed that God was a female entity that inhabited an underground kingdom, she was called “Cosmic Mother” or “Mother Earth” because everything was born and grew from it.

“At harvest time, we leave some of our corn standing for the birds to share the abundance of our fields and bless us. These fields were sacred to the goddess and offered to birds to eat. No human being could enter the sacred cornfield.

Over the centuries, people have discovered that the stellar gods sometimes communicated with human beings through these sacred fields. Time after time, strange circular depressions were seen in the center of these fields. These depressions were called ‘Izishoze Zamatongo’, or the ‘Great Circles of the Gods’.

The gods usually flatten the plants and not break them, so people can read the message and the plants can rise again and grow.

Words cannot describe such a phenomenon that I have seen more than thirty times throughout my life as a shaman healer. Whenever a circle appears in the fields, people rush to erect a fence of poles around the circle. They dance and perform other sacred rituals in honor of the gods of the stars and Mother Earth.

In the old day, when the gods placed circles on our plantations, people rushed quickly to place shards and stones around the drawing to mark it. That’s how the monuments of African stone circles emerged. And it happened all over the world, like Stonehenge, Avebury and others. The Stonehenge monument that you can see today, used to be a circle on the plantation.

This was considered a very sacred thing, so the ancient peoples marked the sites with earth, stones and wood. It’s a way of saying ‘thank you’ to the intelligence behind these messages. These sites were not built just for decoration.

The ancient chiefs, kings and sacred people were in tune with the Great Spirits of the Earth and knew more than we give them credit for, so you can see many similarities between the circles in the plantations and the ancient sacred art. That’s no coincidence.

In addition, our people observed the circles in the plantations forming. That’s when they saw the lights, balls of light spinning in the air and on the ground that are called ‘Abahambi Abavutayo’, or the ‘Fire Visitors’.

Circles are not made only in plantations. If you put a lot of cattle in your village and they are in a big place, sometimes you’ll find these animals forming strange circles and patterns as well.”

In other parts of the world, recent research has also shown that the phenomenon of crop circles is not a contemporary puzzle, but has probably always been with us. The oldest European record of a circle on plantations dates back to the year 1590 and was found documented in a witch trial case in France.

Other ancient records of discoveries of flattened circular areas in plantations were found in folk tales, legends and myths in both Europe and the Americas, and mutwa’s strange “Cattle Circles” story was also observed and documented in Europe.

The hypothesis that the ancient stone circles mark the location of ancient crop circles, considered by the people of that time as a divine sign and worshiped as a place of ceremonies, was also proposed by Western researchers of the crop circles, mainly by the pioneer of this type of research, Dr. Terence Meaden.

The Nazca mummies continue to reveal their secrets as scientists carry out new tests, and what they discover could change all of history.