Início English Could the Moon be an Artificial Satellite? 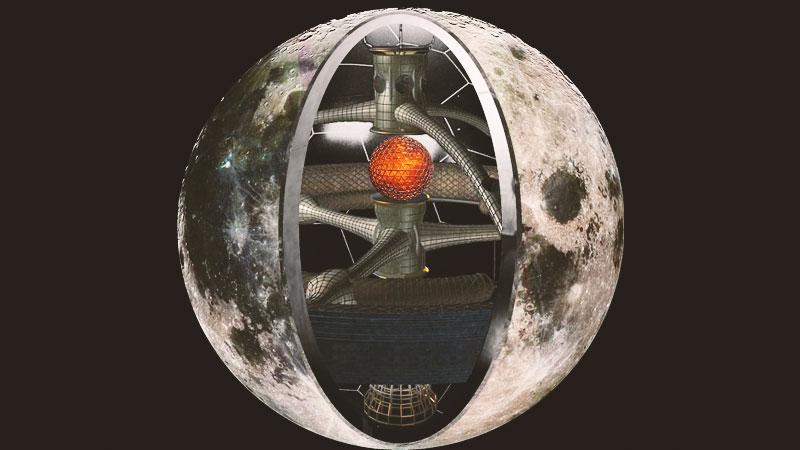 The Moon is the dominant object of our night sky and has inspired many myths since antiquity, and although the last few decades have provided new understandings of many lunar mysteries, a large number of questions about this satellite still remain unresolving and many details suggest that the Moon may not be a natural satellite.

With the exception of Mercury and Venus, all other planets also have moons, but our Moon can be considered quite unusual, both by its orbit and by its size.

The Moon is 1/4 the size of planet Earth, which appears to be a rare cosmic occurrence compared to the size of Jupiter or Saturn that have small satellites with 1/80 of the planet.

Another interesting detail is the distance from the Moon to Earth, close enough that the Moon is apparently the same size as the Sun, and with an almost perfectly circular orbit, the Moon does not behave like other satellites that tend to a more elliptical orbit.

Supporters of this theory point to the rise of reports and UFO photos taken by NASA on its space missions.

The Lunar Spacecraft Theory was first suggested in July 1970 by Michael Vassin and Alexander Scherbakov, members of the Soviet Academy of Sciences.

The thesis of Russian scientists suggests that the Moon is a hollow planetoide created by alien beings with much superior technology than we possess today.

One of the evidences is the thousands of craters of various sizes that cover the surface of the Moon, but the interesting part, however, is that all craters have the same depth and flat bottom.

The vast majority of space bodies heading to the earth’s surface are completely dissolved or significantly diminished due to several kilometers of protective atmosphere. Without atmosphere, the Moon has no such protection.

However, when we consider the depth of these craters compared to their diameter, this suggests that the Moon has some extremely resistant material that prevents deeper penetration, including craters over 290 km in diameter that do not exceed 6.5 km deep.

If the Moon were a homogeneous piece of rock, craters should exist at least four to five times deeper. This caused scientists to suggest that there may be some kind of metal barrier under the surface protected by damage.

Apollo 12 was the second Apollo Program Mission to land on the moon. In addition, this was the first time a spacecraft had made a precision landing at a specific location on the lunar surface.

According to NASA, several seismographs were left on the surface of the Moon between 1969 and 1972, and analysis of the data collected by these devices revealed that our satellite is systemically well active.

On November 20, 1969, the crew of Apollo 12, composed of astronauts Richard Gordon, Alan Bean and Charles Conrad, after returning from the surface of the Moon, launched the lunar module to collide with the Moon.

The impact of the module with the Moon triggered the seismic equipment that recorded a constant echo, like that of a reverberating bell, for more than an hour.

In 1982, nuclear engineer and researcher William L. Brian wrote the book “Moongate: Suppressed Discoveries of the American Space Program”, where he points to the evidence gathered during the seismic experiments conducted in the Apollo program that suggest that “the Moon is hollow and relatively rigid.”

Who built the moon?

The Moon is not only very strange in its composition, but also behaves in a way that is not common. Being exactly 400 times smaller than the Sun and being 400 times closer to Earth, so that both the Sun and moon seem to be exactly the same size in the sky, which we can consider as the greatest coincidence in the local universe.

In addition, the Moon “imitates” the movement of the Sun in the sky, rising and setting at the same point on the horizon, but on opposite solstices. This means that the Moon rises, on the winter solstice, in the same place where the sun rises on the summer solstice, being the only known satellite to act in this way, and there is no logical reason for it. This event is only meaningful to humans on Earth.

Additionally, many scientists have been bold enough to suggest that such a feature was artificially created, but it is believed that certain astronomers have been discouraged from conducting research on the phenomenon that has occurred on the Moon in recent years.

But if the Moon really is artificial, what is the purpose of its construction and who built it? Their field affects the tides and some believe it affects even our mental state. Having become an integral part of life on Earth, it is difficult to imagine our world without the Moon. However, it is possible that humanity at some point in the past may have lived without the Moon.