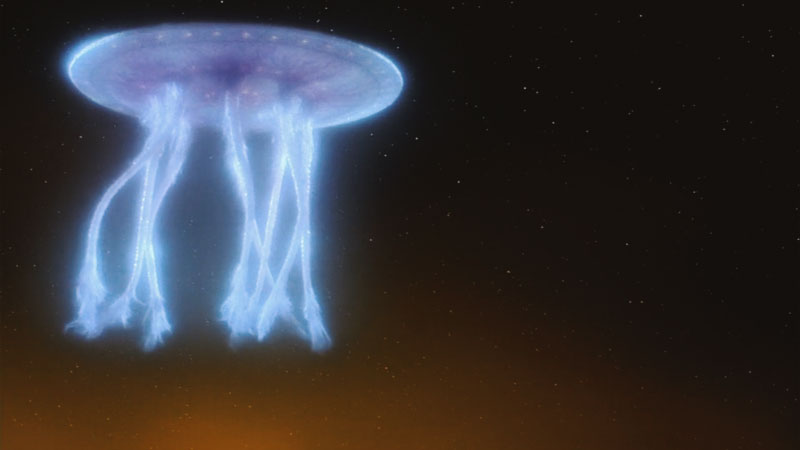 There are many questions surrounding the mystery of the UFO phenomenon, and so far, the origin or intentions of these strange visitors that fly over our planet are unknown.

Theories of advanced extraterrestrial races or future humans visiting us traveling through time are already well known to the general public, but lately a new theory is gaining traction.

The new studies try to demonstrate that UFOs would not be metal machines, but biological, natural or genetically modified entities, meaning they would be new forms of life coming from space.

The existence of these space creatures had already been theorized in 1919 by the researcher of anomalous phenomena Charles Fort, in his book “The Book of the Damned”.

Other researchers such as biologist Ivan T. Sanderson and ufologist Trevor James Constable believed that the phenomenon could best be explained by the presence of huge animals with bioluminescent capabilities, similar to those of marine animals, that inhabit the Earth’s atmosphere, forming an ecosystem of atmospheric creatures of unknown origin.

Over the years, many astronauts claimed to have observed jellyfish-like objects in space, sometimes photographing and filming these strange life forms as in the cases of John Glenn and Franklin Musgrave.

Spanish ufologist Andreas Faber-Kaiser published in his book “Las Nubes del Engaño: Crónica Extrahumana Antigua” (The Clouds of Deception: Ancient Extra-Human Chronicle) a chapter where he warns that UFOs are new forms of life that are coming to Earth.

David Gutiérrez Roca, researcher at the University of Alicante, Spain, published in 2022 the book “La Biblia de las EBAs” (The Bible of ABEs) in which he claims that strange bioluminescent life forms are colonizing our atmosphere.

The ABEs (Atmospheric Biological Entities) could be responsible for many anomalous sightings mistaken for flying saucers coming from other worlds.

For Roca, the anomalous phenomena recorded will increase more and more, as these creatures are multiplying in the Earth’s atmosphere, which could cause a series of troubles in the future.

Nuclear physicist Ruggero Santilli has published two articles on the existence of unknown and intelligent entities in our atmosphere, following his research with concave lens telescopes and his studies on antimatter.

When we look at some of the most relevant cases in ufology, such as the Bariloche Incident, in Argentina, or the Brazilian incident on the island of Colares (Operation Prato), witnesses assure that UFOs, when seen up close, had attributes very similar to those of animals, such as nerves, veins, tentacles or flagella.

“Everything seems to indicate that these creatures are really coming to our planet indiscriminately,” says Roca.

We cannot yet predict the consequences of this colonization, but if this theory is confirmed, the laws of biology, evolution and physics will have to be changed once more.