Início English The Iron Pillar of Delhi That Never Rusts 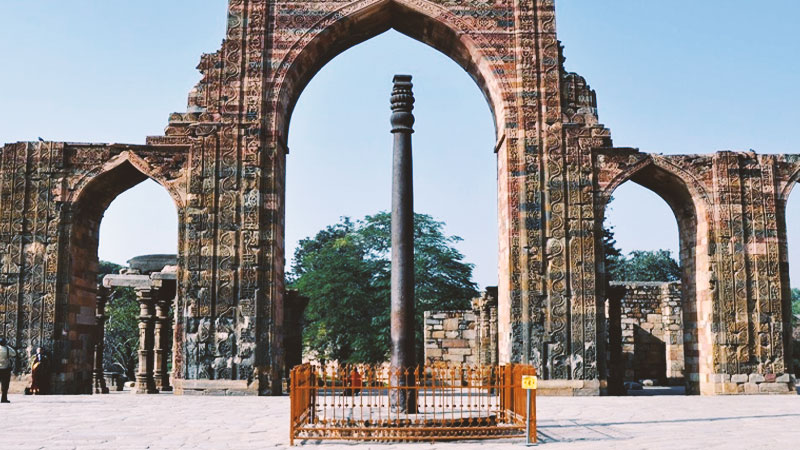 Architecture and engineering have been dynamic and evolutionary processes, based on innovations in carpentry, masonry and metallurgy for millennia. These processes have been well documented, allowing the ability to gather useful information and develop better contemporary iterations, but an intriguing gap in this story raises some questions.

In front of a mosque in an area of Delhi, India, known as the Qutub complex, is a wrought iron pillar famous for its rust-resistant composition. Although unpretentious at first glance, the Iron Pillar is about 1,600 years old and shows no signs of wear and has weathered the intense Asian monsoon, a climatic phenomenon that causes heavy rains and long droughts during the year.

The pillar is believed to have been built during the reign of Chandragupta II, and is 7 meters high and weighs about 6 tons. These numbers become even more surprising when you discover that the pillar was built about 750 kilometers from its current location and its method of transport still remains a mystery.

The Iron Pillar of Delhi

The question of greater perplexity around the pillar concerned its composition and what kept it preserved. Some of these questions were answered by examining the process used in the casting of the thin protective layer, known as “misawite”, which surrounds the pillar. This layer consists of a compound of iron, oxygen and hydrogen and is 0.05 millimeters thick.

Some believe that this layer was simply an accident and therefore this would be the reason why it is the only one of its kind who resisted weathering, but others attribute this characteristic to the highly advanced blacksmiths, with an unparalleled level of knowledge, who would have done so intentionally to resist time.

Some research has confirmed that the temperature required to build such a pillar could not be achieved by coal combustion and, consequently, the ancient Indian blacksmiths would have used much more complex methods to achieve such a temperature to forge the metal.

Other studies on the structure of the pillar indicate that it was not melted, but manufactured from an incredible process of forging and hammering, using pieces of hot and pasty iron, each weighing 20 to 30 kilos, in a gradual process. The surface of the column apparently still retains some of the hammer marks.

Although a small amount of rust is currently beginning to appear on the pillar, this does not make its condition less enigmatic, because given the climatic conditions of the region and the long time passed, it should no longer exist.

Although the pillar itself was preserved, the technology used in its creation was not. The anachronistic knowledge used in cast iron during this period could hardly be imitated today. There’s even evidence that he was shot at close range by a cannonball that made only a small mark on him.

But a characteristic of the pillar that gives some hints about its mystery is a Sanskrit inscription that references a king known as Chandra, who many believe to be a reference to Chandragupta II.

The Gupta Dynasty in India was marked by significant advances and achievements in science, technology, literature and astronomy. They developed the game of chess and some of the most famous pieces of Indian literature. Indian scholars, already during this time, understood that the Earth is round and revolves around the Sun. They were in tune with cosmic cycles, being aware of eclipses and other astronomical events.

Chandragupta II, also known as Vikramaditya, was one of the most notable rulers of the dynasty who embraced Buddhism and Jainism and was known for his courage and benevolence. This led to an incorporation of the iconography of multiple religions into indian art at that time.

The inscription on the pillar led to the discovery of its original location, the Udayagiri caves, located near Vidisha, 750 kilometers north of Delhi, and which proved to be a site of significant astronomical interest at the time. The pillar itself may have been an astronomical tool, like a sunwatch used to measure the equinoxes.

The Pillars of Ashoka

There are other pillars throughout India that stand out and are similar to delhi’s, although they do not have the same provenance and show signs of wear and tear and some are deteriorating significantly to the point of causing irreparable damage.

These pillars were built by King Ashoka, a ruler of India whose military conquests have become a spiritual and moral dilemma for him, who converted to Buddhism and raised these pillars throughout India as an apology for his barbaric acts, but only 19 of these pillars still remain.

They were built around 250 BC., they were up to 15 meters high and weighed up to 50 tons, significantly larger than the Delhi Iron Pillar. Each pillar was engraved with inscriptions of Buddhist wisdom in Sanskrit, Aramaic and Greek, were covered with notches of lotus flowers and different animals and placed along trade routes to maximize the number of people who could see them.

These pillars were also transported for hundreds of kilometers, of unknown ity, despite their enormous weight and size and placed near the Pyramids of Ashoka, made of sandstone.