Início English The Megaliths of Baalbek 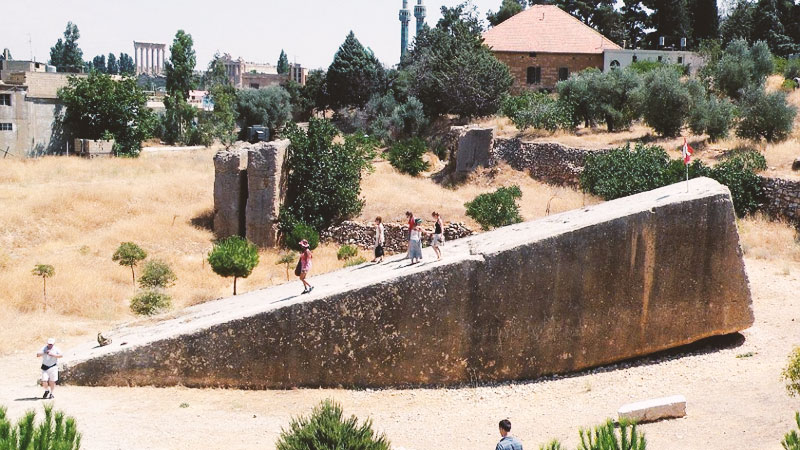 When we talk about the mysteries of ancient megalithic ruins, famous sites such as Stonehenge, Palenque and Göbekli Tepe come to mind, but the temples of Baalbek impress by their size and to this day very little is known about its construction.

The city of Baalbek is located in northeastern Lebanon, near Beirut, and is named after the Phoenician god Baal. The date of its foundation is uncertain, but the first traces of use of the area as a sacred site date back to about 9,000 BC, when the Mesopotamian and Phoenician gods were venerated.

During the time of the Roman Empire the site became known as Heliopolis, the “City of the Sun”, founded by Alexander the Great in 334 BC, and later became the site of Roman temples dedicated to Jupiter, Bacchus and Venus, based on the popular cult dedicated to this famous triumvirate.

Although the cornerstones and the location where they were extracted have been known for some time, the site’s largest megalith was discovered only recently, just as a team of researchers tried to ascertain how the three massive blocks of the foundations of the Temple of Jupiter were transported and why two others like them were left in the quarry.

Weighing an impressive 1,650 tons, the monolith is 20 meters long, 6 meters wide and 5.5 meters high and is considered the largest carved stone ever discovered, surpassing the other abandoned and mysteriously gigantic monolith of the same quarry, known as Hajar al-Hubla, or “Stone of the Pregnant Woman”, which weighs 1,200 tons.

One of the most incredible attributes of this complex is the Temple of Jupiter, built by the Romans in the 1st century BC, and in its foundation, there are three megalithic stones of approximately 800 tons each, known as “trilithon” and, to move these stones these days would require the effort of some of the most powerful cranes in the world.

For comparison, the stones used to build Stonehenge weigh about 25 tons each, only a small fraction of the weight of the trilithon stones.

Today there are only six of the 54 columns left in the Temple of Jupiter, most of which have been removed over time to be reused in other works, eight of them were taken to Constantinople and others fell for natural causes. These impressive columns, 30 meters high and 2.5 meters in diameter are the largest in the Classic World.

Researchers like Graham Hancock find this difficult to understand, and raise the possibility that a pre-Diluvian civilization about 12,000 years or older, and with advanced technology may have been responsible for the trilithon, over which the Romans later built their temple, taking advantage of the gigantic stone blocks that were already in place.

“There is no doubt that the Romans could move large blocks of stone, and that they were responsible for building the temple, but I am working on the assumption that they built it on a megalithic platform already existing thousands of years ago. But the handling and positioning of three megalithic 800-ton parts is a problem of a completely different order. I think this requires careful analysis rather than simply saying ‘the Romans did it’, as archaeologists today are inclined to do,” Hancock says.

Some legends suggest that the site may have been built by Cain to hide from God’s wrath, while others say that Baalbek would be the ruins of the Tower of Babel, built by giants under Nimrod’s orders.

The Stone of the Pregnant Woman

The Stone of the Pregnant Woman is a monolith, that is, a work done using only a single block of stone, and is one of the largest existing in the world.

There are several myths and legends that intend to explain the name attributed to this impressive monolith. One of them says that this block of stone would influence the fertility of the women who visited it, while another says that in the past, a pregnant woman claimed that she could remove that block of stone if it was fed by the community.

There is yet another belief, that King Solomon would have built a palace for the Queen of Sheba with the help of the Djinns, the mystical entities of arab mythology. The pregnant djinn entities had the task of cutting and moving the stones, and the Stone of the Pregnant Woman revealed to have a crack that could compromise the transport and so it was abandoned in the quarry.

Scottish explorer, writer and diplomat David Urquhart, who visited and wrote a diary about the site in 1860, believed that Baalbek’s original structure was built by Noah’s contemporaries, using the same technological prowess that enabled the construction of the Ark, and the work would have been interrupted because of the flood that swept away all similar sites, leaving behind the enigma of Baalbek’s construction.

Because of its bewildering size, the site draws the attention of proponents of Ancient Astronaut Theory due to interpretations of ancient Sumerian texts that referred to Baalbek as “the landing site”.

A theory proposed by author Zechariah Sitchin says that the foundation stones in Baalbek had to be large enough to serve as a landing and launch platform for the spaceships of the Anunnakis gods, as documented in the Sumerian text “Epic of Gilgamesh”.

Some believe that the area may be located within specific geomagnetic energy fields, where resonant electromagnetic energy was harnessed to erect the structure. Among the proponents of this theory is Freddy Silva, who proposes the possibility that Baalbek is situated along a special energy field due to the quartz contained beneath the earth’s surface.

The quartz in the area may have worked in conjunction with the massive stones of the quarry that supposedly contained piezoelectric properties, possibly helping in the construction and transport of Baalbek’s huge monoliths.

Others believe that Baalbek was simply built by an ancient civilization with advanced technology, including conventional archaeology, which does not necessarily agree that the trilithon was built by the Romans, but potentially by some earlier civilization.

Nothing confuses archaeologists as much as impracticality, and while Baalbek’s topography requires strong foundation stones and a large stone is easier to move than many smaller stones, the pillars that sustain the temple are much larger than they needed to be. In fact, Baalbek is part of a series of ancient projects that are under a rigorous study by the German Archaeological Institute because they are “unnecessarily large”.