Início English Ezekiel’s Wheel: Evidence of UFOs in the Bible? 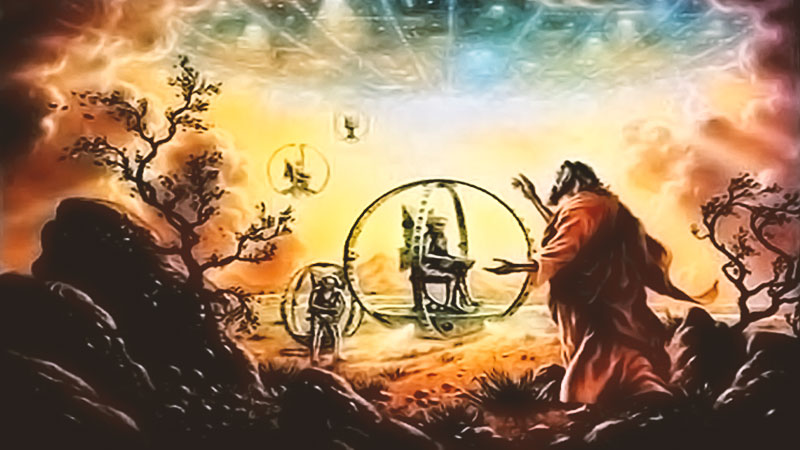 When biblical texts are analyzed from the perspective of technological advances, an interesting picture emerges of the possibility that our ancestors were actually visited by a race of advanced beings who were interpreted as gods.

The Ancient Astronaut Theory interprets Ezekiel’s vision of the Merkabah, or Chariot of Fire, most likely as a spacecraft used by an advanced species to reach Earth and humanity.

Erich von Däniken is one of the greatest proponents of this theory, providing a very convincing argument for an alternative interpretation of the Book of Ezekiel.

The Chariots of the Gods

In the 1970s, Erich von Däniken was invited to give a secret lecture at NASA, where he met Josef F. Blumrich. The two talked about von Däniken’s Ancient Astronaut Theory, mainly the idea that Ezekiel’s vision was that of a type of spaceship, rather than a divine carriage.

This conversation led Blumrich on a mission to refute von Däniken’s seemingly absurd theory, so the scientist did some research and began writing a book.

However, the evidence was so overwhelming that Blumrich had an epiphany. Ezekiel was undoubtedly describing an advanced spacecraft. Blumrich even used Ezekiel’s description of the ship to patent his own version of an omnidirectional wheel, also known as “wheels within wheels”.

Ezekiel is a prominent figure in several Biblical texts of the Old Testament and is described as a prophet. One of the most interesting features of the Book of Ezekiel is that it is written using the pronoun “I”, clearly showing that it was written by Ezekiel himself as a first-person account, unlike the other third-person biblical texts narrating past events transmitted from generation to generation. This seems to give a little more credit to the story, since it is told right after its occurrence.

Ezekiel describes the sight of a carriage with wheels descending from the sky toward him, piloted by beings “humanlike”. While many biblical versions of the story describe this being in the chariot as God, von Däniken points out that the old Hebrew version never mentions the term “God,” and this word was later added throughout numerous translations.

Ezekiel’s description of the landing of the wheeled carriage looks a lot like landing a spaceship. The wind storm, the flash of lightning and bright lights are similar to a spaceship descending to land and raising dust in a spectacle never before seen by anyone in such a primitive era. Ezekiel even describes the fire that feeds the carriage as a “shiny metal”.

“I looked: I saw an immense dust storm come from the north, an immense cloud with lightning flashing from it, a huge ball of fire glowing like bronze. Within the fire were what looked like four creatures vibrant with life. Each had the form of a human being, but each also had four faces and four wings. Their legs were as sturdy and straight as columns, but their feet were hoofed like those of a calf and sparkled from the fire like burnished bronze. On all four sides under their wings they had human hands. All four had both faces and wings, with the wings touching one another. They turned neither one way nor the other; they went straight forward.” – Ezekiel 1:4-9

There is clearly some discrepancy between this description and much of the way Ezekiel’s vision is portrayed in biblical art. The photos usually leave out the details surrounding the fire, the omnidirectional wheels and the dome crystal that surrounds the heads of human-looking creatures.

These “humanlike” creatures then bring Ezekiel to his vessel and take him to a temple at the top of the highest mountain. During the journey, Ezekiel mentions feeling God’s hand on him, which could be interpreted as the force of gravity, or G-Force, felt during rapid accelerations at great speed.

Throughout a series of Biblical stories, the Ark of the Covenant presents itself as an artifact of interest to Erich von Däniken’s theory.

The most relevant mention is in the Kebra Nagast, one of the exclusive books of the Ethiopian Orthodox Church Bible that tells the story of the dynasty of King Solomon and the Queen of Sheba.

This account tells that King Solomon had flying machines that are not mentioned in the Judeo-Christian Bible, as well as possession of the Ark of the Covenant, which would have been brought to Ethiopia and would be kept in the Church of St. Mary of Zion.

These texts report that people were afraid of the Ark and those who came into close contact suffered from symptoms similar to those of radiation contamination, suggesting that the Ark of the Covenant could be some kind of nuclear reactor.

Erich Von Däniken believes that there are other verses from the Bible that fit his theory, including some that suggest similar temples or spacecraft landing areas, such as the one to which Ezekiel was taken.

A temple known as Chavin de Huantar can be found in Peru, situated on a mountain over 3,100 meters high that was inhabited by a 3500 years-old pre-Inca culture and of which little is known.

The temple is decorated with winged figures and carved heads that appear to be wearing helmets and Erich von Däniken believes its origins are similar to those described by Ezekiel in the Bible.