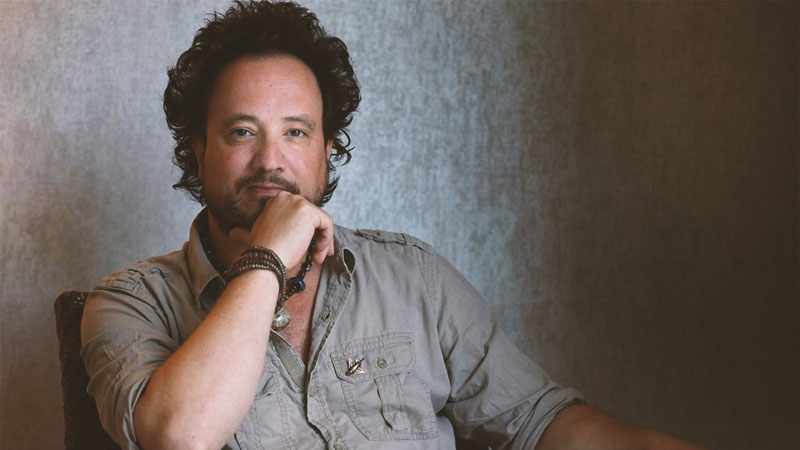 Giorgio Tsoukalos was born in Lucerne, Switzerland on March 14, 1978, and considers himself a child of the 1980s.

“I grew up with Star Wars and with very important films at that time,” he said in the conversation, although he clarified that the main responsible for his fascination with aliens was his grandmother.

“It was a good idea she told me from a very young age, when I was five or six, bedtime stories mixed with Edgar Cayce or Erich von Däniken’s Chariots of the Gods,” says Tsoukalos.

Giorgio became interested in Von Däniken’s books when he was 12 years old and was fascinated, and since then he has become his favorite author.

“I was lucky enough to grow up in Switzerland, so when I was 15 or 16, I was already friends with Erich. I can say that we have been friends for over 30 years. Imagine. He is a wonderful person and my mentor,” Tsoukalos said.

Since the release of Ancient Aliens in 2009, Tsoukalos has become a familiar face on the internet and has gone viral with the meme where the wild-haired ufologist looks at the camera with a weird face and an overlay says “ALIENS”.

“It’s something that grew organically. I have no control over this meme. I know it’s used positively and negatively. And honestly, I don’t care. It’s my face. I laugh about it everyday. So I love it, I think it’s wonderful. And it also shows the love and appreciation that people have for me and for the alien issue,” says Tsoukalos.

When and how did you decide to become a researcher and professional in the field of Ufology?

Giorgio Tsoukalos: I decided in 1998, when the person who ran the American Ancient Astronaut Society, Dr. Gene Phillips, wanted to retire as he was old. This organization, based in Chicago (USA), has existed since the mid-1970s. Between 1978 and 79, Erich von Däniken started a branch to the German-speaking countries: Germany, Austria and Switzerland. Together they cared for it there and in the US, but the Ancient Astronaut Society’s headquarters are still in Switzerland. However, in 1998, Phillips decided that he wanted to leave the scene and not publish the magazine anymore. Erich said that fine, he could stop, but that Erich would continue the German version of the Organization. When I heard that this was going to happen, I called Erich and Phillips and said I wanted to continue. The two said, “No, who are you? Why is that?”. I had to do a year and a half of lobbying a lot of people in the Ancient Astronaut field, asking for a chance and saying I wouldn’t let them down. And here we are. This is a story that few people know, but Gene Phillips, until he passed away in 2016, was against me, because I managed to take everything to a new level, which he had never reached. Instead of being happy, he hated it. In the case of Erich, it was the opposite, he loved what happened with “Ancient Aliens”.

People are, little by little, more open to the kind of ideas covered in “Ancient Aliens”?

Giorgio Tsoukalos: Exactly. And it has a lot to do with the way we present things. I always tell people who don’t agree with ideas to watch the show anyway. Firstly, because it is beautiful and well made, and secondly, because it is possible to travel the world without moving an inch. At the end of the day, if something was useful, the objective was accomplished. A lot of the things that we showed in the series changed the minds of a lot of people, even if they didn’t agree with everything. I have so many examples of people who tell me that two years ago they started watching the show and thought it was crazy, but now they agree on a lot of things. Not all, but some or many. At the end of the day, I can’t force anyone to buy into this idea, everyone decides whether or not they’re ready to embrace this way of thinking.

What’s the secret to, even after so many years on air, keeping everything fresh and interesting?

Giorgio Tsoukalos: I have to give credit to the series’ production company, Prometheus Entertainment, and producer Kevin Burns. He’s a visionary, an amazing person to work with. I see different versions of each episode, from the raw, at the very beginning, to the end, and often the difference is striking. That’s the Kevin Burns touch. He really understands about television and he certainly loves this topic. And I’ll tell you, at first, Kevin just liked the theory, but now he believes in it, no matter how skeptical he is. That’s what makes the show interesting: as I said, the narration doesn’t end in full stop, but in question marks. We must remember that “Ancient Aliens” started out as a simple two-hour documentary. Until then, there was no talk about a season or series. It was just that, one chance and that was it. And the fact that we now have a series with so many seasons shows the unbelievable reception we’ve gotten across the world, not just in the US, but in the whole world. This is something none of us expected, which is why I always have to thank fans all over the world, as they embraced us with such love and enthusiasm. Without them we wouldn’t be on air!

With so many cases around the world, how many more seasons will it take to come close to covering it all?

Giorgio Tsoukalos: There are always interesting things we can tackle, but we need to have the same audience, or more, to continue. As long as people watch the show in large numbers, we will be there. We live on a big planet, with many mysteries, some that we haven’t even explored yet. For example, in Colombia, there is a fantastic place called Tierradentro that we still haven’t talked about in “Ancient Aliens”. Another thing that I find interesting is a Stonehenge-like that was found in the Amazon, on top of a hill, and the structure is aligned with the stars. And one of my favorites is in the northeast of Brazil, close to Paraíba, is the Ingá Stone, with its carved inscriptions that present different types of glyphs and symbols, which even today people don’t know what it means and who, or what culture from Brazil, carved them. And, see, if you look at those symbols, some of those heads look like aliens. Very strange, I would love to see it up close one of these days.

Of everything you’ve seen around the world, what’s the most convincing evidence you’ve found, especially for non-believers?

Giorgio Tsoukalos: I would immediately send everyone to Bolivia, near Lake Titicaca, in the highlands of the Andes. There is an archaeological site called Tiwanaku, which is fantastic, but just 300 meters from it, there is another very small one called Pumapunku, I have been there eight or nine times. It’s my favorite place in the world! In it, all logic is turned upside down. Most stones are of two types: red sandstone and gray andesite. Both present problems. In the case of sandstone, how they were transported and in andesite, how they were cut. Some of the red sandstone blocks are huge platforms, weighing over 7 tons and the size of a train car. When you ask archaeologists how these blocks were transported, they say it was simple: rolling through wood. Okay, okay, maybe that’s right, as this has happened in many places, but that doesn’t seem to have been possible in Pumapunku as we are at an altitude of over 3,900 meters, above the natural tree line. No tree ever grew at that altitude! So where did the wooden carts and logs come from? How were they transported? Nobody knows. As for gray andesite, it is a very, very hard volcanic igneous rock. Archaeologists say that because copper and iron tools and chicken bones were found at Pumapunku, it proves how andesite was cut. Believe it or not: chicken bones! I’m sorry, but it’s impossible to cut something hard with a softer material, the tool must be just as hard or more. A famous block of Pumapunku has a perfect groove, with holes drilled every 2 or 3 centimeters. Each hole is exactly 4 centimeters deep and if you run your finger along the groove line with a little pressure it will cut itself, so you can get an idea of ​​how sharp it is. And all this is combined with the oral traditions of the native population, the Aymara, who still live there to this day and say: “We didn’t build this”. They credit the works to the giants and, in some cases, “los dioses”. We know that “los dioses”, the gods, did not exist and were confused, misinterpreted, by technological beings, space travelers, who visited us a long time ago and gave us knowledge. Somewhere in the future we will be the ancient astronauts on another planet. Not tomorrow, but maybe 500 years from now.

And when will the revelation happen, when will governments say that extraterrestrials are here?

Giorgio Tsoukalos: That will never happen! It might happen, but I doubt it. The revelation is not a one-time event, but a process over time, in which the planet is prepared for their arrival. The public arrival, I say, because I think they are already here. We or people watching “Ancient Aliens” would be happy with a sudden revelation, but that’s just our case. I think the vast majority of humanity would be terrified, panicked, and that’s why it’s so important to talk about these things. Erich von Däniken refers to this as “the clash of the gods”, we have to avoid this clash at all costs. We are a minority in the case of these ideas. I am very happy to be able to spread this knowledge to those who don’t know about it, as I find it more exciting to know that we are not alone in the Universe than the other way around.

You can learn more about Giorgio Tsoukalos in his website: https://www.thealiensguy.com/

Researchers discover the ruins of what may be a 6,000-year-old city submerged in the waters off Cuba's west coast.