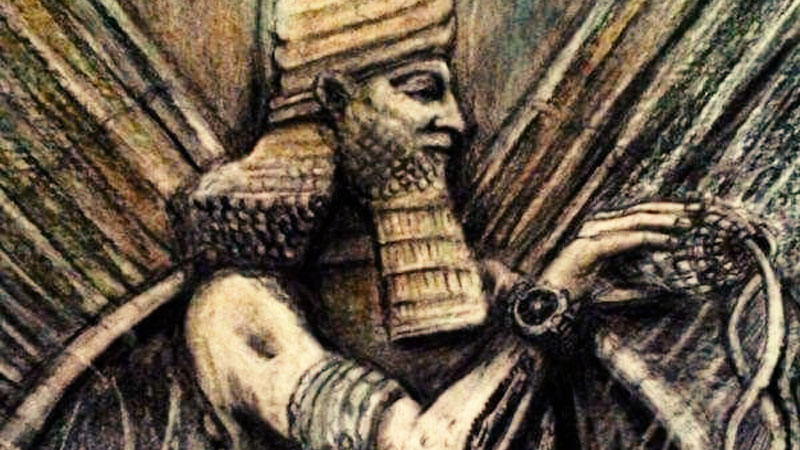 The Sumerians were known for their worship of many gods and among them was Enki, a god known for being the patron and founder of the city of Eridu, possibly the first city of Mesopotamia, thus establishing the beginning of civilization on Earth.

Enki was a very powerful god and had the help of mystical beings at his service, the legends describe a variety of creatures such as mermaids, giants and even demons that helped him in his earthly endeavors.

Enki represented healing, fertility and creation in Sumerian culture and his intelligent magic often included tricks to benefit the human race and is widely depicted in the art and literature of ancient Sumeria, including the creation epic Enuma Elish, The Epic of Gilgamesh and other sacred texts of Mesopotamian culture.

Due to his prominence in such works, it is fair to assume that he played a great role in Sumerian culture, but much of what is known about enki’s figure remains shrouded in mysteries. He was known by several names with Enkig, Ea, Nissiku and Nudimmud, which have a variety of translations such as “Prince”, “Lord of the Earth” and “Creator”.

In addition to his contributions to creation, Enki is known for his intelligence, wisdom, and gift for the divine arts and crafts that represent spirituality. His knowledge of rituals included exorcism as well as prayers and healing chants and is said to have come to Earth to share knowledge of “life after death” with humans.

The Anunnakis were beings of higher consciousness and advanced technology, and according to legend, these gods or extraterrestrials came to Earth in search of gold, and while the older gods enjoyed a life of leisure, the younger gods worked in gold mining, so the intelligent Enki would have suggested that the gods create other beings to extract the gold for them.

Considered masters in cloning, genetic engineering and artificial fertilization, the Annunakis sought to create smaller beings, such as the human race, to do their job. Although Enki contributed to the creation of the human race through genetic manipulation, he was well-intentioned and provided humans with information on how to restore the Earth’s balance after devastating droughts and famine. Enki was attracted to forgiveness, compassion and humanity.

Enki had a substantial cosmic family lineage. His family included father, mother, brother, wife and four children, eight more of which were born later, as mentioned in mesopotamian literature.

Sumerian mythology refers to Enki’s father as Anu, who means “god of heaven” and his mother was Nammu, the “goddess of the sea”, mother of all gods and gods and portrayed as the feminine force that gave birth to the heavens and the Earth.

Enki was the brother of Enlil, the “god of air, weather, and storms”, who was often regarded as an adversary, causing problems for Enki to creatively fix.

Later, Enki married the goddess Ninhursag, who is also known by the names Ninmah, Damgalnuna and Damkina. Together they had four children: Asarluhi, the “god of magical knowledge”, Enbhlulu, the “god of dikes and channels”, Adapa, the “god of wisdom” who refused immortality and was the creator of written language, and Marduk, who defeated the goddess Tiamat.

An important figure in mythological history, Enki remains one of the greatest Sumerian legends and one of the most complex Sumerian gods.