Início English The Hidden River of Mercury at Teotihuacan 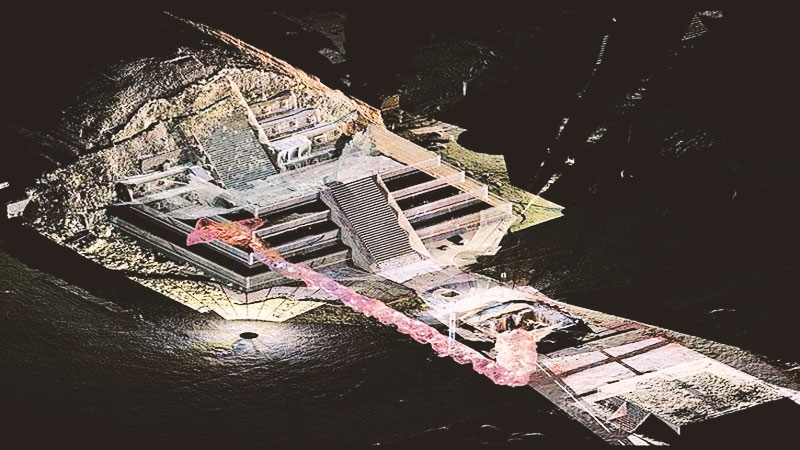 Founded around 300 BC, when the population of central and southeastern Mesoamerica began to gather into larger settlements, Teotihuacan was the largest pre-Columbian city in the Americas for over 500 years, and is believed to have at least 120,000 people lived in this great metropolis during its heyday.

Three great pyramids link the Avenue of the Dead: the pyramid of the Sun, the Moon, and the Feathered Serpent Quetzalcoatl. This last of the three is currently the most archaeologically interesting, and in 2003 two archaeologists from Mexico’s National Institute of Anthropology and History found a secret tunnel leading under the massive structure.

When the tunnel was first discovered, the archaeologists expected to find a treasure chamber filled with gold. However, to everyone’s surprise, they instead unearthed several items such as crocodile teeth, jaguar sculptures, necklaces made of human teeth, jewel-eyed figures, and much more.

The most remarkable discovery however, was a miniature mountainous landscape with pools of liquid mercury apparently depicting lakes. The walls of the secret tunnel were infused carefully with fool’s gold or powdered pyrite in order to reflect the mercury, creating the effect of being surrounded by stars.

A number of archaeologists also believe that the subterranean tunnel may also depict a sacred underworld river that leads the way to the royal tombs. The remains of some powerful Teotihuacan kings were never found.

Teotihuacan is an ancient city located nearly 50 kilometers (31 miles) northwest of Mexico City. This sacred city flourished between 100 BC and 750 AD, and was destroyed long before the Spanish conquest.

The name Teotihuacan came later from the Aztecs, who called it “the city of the gods.” The city was certainly on a bigger scale than everything else in the Americas at that time, but not much about the people of the city is known as no written records have ever been found.

The hidden tunnel had remained in an undisturbed state for about 1,800 years. It was first uncovered by archaeologist Sergio Gómez Chávez after a heavy rainstorm.

Days after the heavy rain, Sergio Gómez Chávez arrived at Teotihuacán and found a three-foot-wide sinkhole at the foot of the Temple of the Feathered Serpent.

Gómez took a flashlight and shone it inside the tunnel. However, he was unable to see anything except darkness everywhere. So, he decided to descend into the tunnel to find out what was inside, tying a rope around his waist and being lowered in by his colleagues.

Gómez came to rest in the tunnel’s middle and saw that the passage of the tunnel was blocked by huge stones in both directions. He knew that other archaeologists had discovered a narrow tunnel under the Pyramid of the Sun previously. So, he made an assumption that what he had found was a similar structure under the Pyramid of the Feathered Serpent.

Gómez then made plans to unearth the secret tunnel and explore the site. He constructed a tent on the sinkhole in order to keep it away from the eyes of thousands of tourists visiting Teotihuacán. With the National Institute of Anthropology and History’s help, Gómez was able to use ground-penetrating radar devices.

By the beginning of 2004, Gómez had assembled a team of 20 selected workers and archaeologists. Together the team started to scan the ground beneath the temple, and by 2005, they were successful in completing the digital map. As Gómez had thought, the tunnel ran about 100 m (330 feet) from the Ciudadela (the citadel and plaza surrounding the temple) to the core of the Temple of the Feathered Serpent.

As the Mexican archaeologists began work in the new tunnel, they discovered thousands of artifacts and three distinct underground chambers. The artifacts included boxes of rubber balls and carved shells, jaguar remains, and jade statues, in much higher quantities than were found elsewhere in the city.

But what surprised the archaeologists the most was the presence of huge quantity of liquid mercury. Mercury is a highly toxic substance that is capable of causing significant damage to the human body when exposed for a longer duration of time.

Finally, in 2009, Gómez was granted permission by the government to properly dig the tunnel. He broke the entrance of the tunnel and installed ladders and a staircase in order to access the subterranean site.

The work was painstaking. Inches of the ground were broken at a time, and the excavation of the site was done manually with the use of spades. About 1,000 tons of earth in total were extracted from the tunnel. After the removal of each segment, a 3-D scanner was used in order to document the progress of the excavation.

The Lake of Mercury

According to Gómez, the lake of liquid mercury seems to be a representation or symbol of an underworld lake or river. He also believed that it was a sign that his team was getting closer to discovering the first royal tomb in Teotihuacan, and potentially unearthing the mysteries of the powerful city.

According to Rosemary Joyce, Professor of Anthropology of the University of California, the liquid mercury might have been created by the Mesoamericans with the use of mercury ore. They certainly had access to this material, but it was mostly used for coloring the bodies of the royals and decorating jade objects.

Traces of mercury have also been found at other sites belonging to the Olmec and Maya civilizations. However, none of the other sites had such a huge amount of liquid mercury as found under the Temple of the Feathered Serpent.

To compound the mystery, mercury was rare in ancient Mexico. Moreover, the ore was difficult to mine and this scarcity, combined with its reflective properties, made mercury a valuable substance. The mercury accumulation in Teotihuacan would have been very valuable, and it is believed that the lake of mercury had a ritual, supernatural significance.

But quite what that was, remains a mystery. No royal tombs have been found in the hidden tunnel to date, and researchers have not been able to identify the purpose of the structure.

And so the team continues their research, wearing protective gear against the mercury and working in the heat and darkness of the tunnel to find out why and what the ancient Mesoamericans built it for.