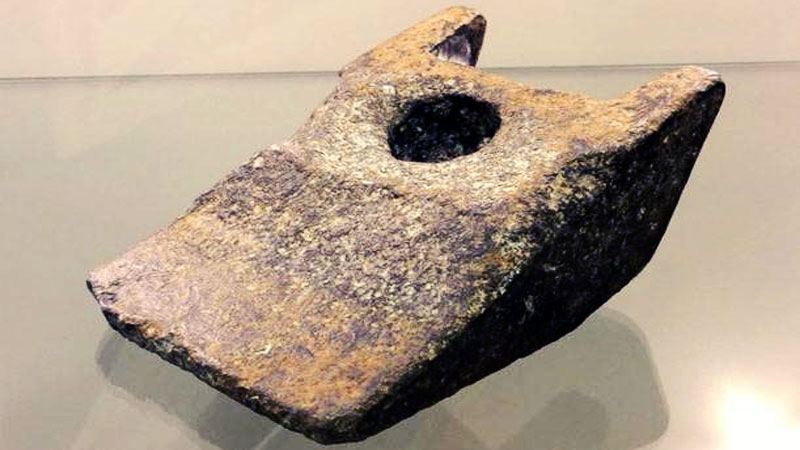 In 1973, builders working on the banks of the Mures River, near the city of Aiud, Romania, found three unusual objects 30 ft. underground that appeared to be very old.

Archaeologists were called in and immediately identified two of them as being fossils of a large prehistoric mammal extinct over 100,000 years ago, but experts were surprised to find that the third object was a very light piece of metal that appeared to have been fabricated.

All three objects were sent for analysis to Cluj, the main city in the Romanian region of Transylvania and tests showed that the object is made of 12 different metals, composed of 89% aluminum and traces of copper, zinc, lead, cadmium, nickel and other elements, and has been dated by the Romanian authorities to be 250,000 years old.

Initial results were later confirmed by a laboratory in Lausanne, Switzerland.

The fact that this strange wedge-shaped object is made of aluminum has experts puzzled, as metallic aluminum only began to be produced by mankind in 1825.

Other experts who performed tests put much later dates, ranging from 400 to 80,000 years, but even at 400 years it would still be 200 years before aluminum was first produced.

The mysterious object is considered an OOPART, an acronym for “Out of Place Artifacts”, such as the dozens of prehistoric objects found in various places around the world that appear to present an advanced technology level inconsistent with the time in which they were produced.

According to Ancient Astronaut Theorists, this piece of aluminum may actually be proof that aliens are real and have visited Earth in the distant past.

The object has concavities that suggest it was part of a more complex mechanical system, possibly of alien origin.

Gheorghe Cohal, deputy director of the Romanian Association of Ufologists, said that “Laboratory tests have concluded that it is an ancient UFO fragment, since the substances that compose it are not compatible with the technology available on Earth at the time.”

Romanian historian Mihai Wittenberger has tried to claim that the object is actually a piece of metal from a WWII German plane, but that doesn’t explain the age of the artifact.

The metal object is now on display at the Cluj-Napoca History Museum with a sign next to it that says “Origin Unknown”.