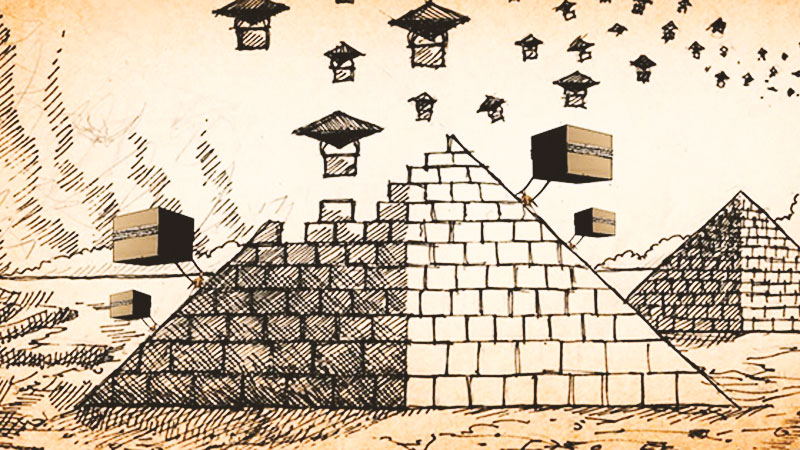 “He who knows the secret of sound, knows the mystery of the whole universe”, said Hazrat Inayat Khan, hindu musician and philosopher.

Sound is our connection with the present, with each other and with our deep and ancient sense of the world. Over time, the technology of ancestral sound, created through voice, instruments and the natural world, has provided healing and spiritual connection.

From the biblical verse of the Old Testament “And God said, ‘Let there be light'” to the meditative “OM” of hindu tradition, sound represents a spiritual meaning that is essential to the human relationship with nature, the i and others.

The first known ancient peoples to use sound as a healing power were the indigenous peoples of northern Australia. This ancient culture created a kind of natural healing expressed through “didgeridoo”. Made of fallen eucalyptus branches and excavated by termites, didgeridoo is considered the oldest wind instrument in our history, over 40,000 years old.

Used in ceremonial rituals and for its healing properties, didgeridoo was also a way of communicating over long distances due to the unique sound waves believed to be heard across the Earth. The low frequencies produced by didgeridoo are thought to heal, aid in mobility and open energy flows.

Native American cultures have incorporated chants into their tribal ceremonies with a complex and interconnected musical exchange that encompassed nations and tribes.

According to the American Indian Heritage Foundation, “the irregular and common rhythms and a somewhat out-of-tune singing style are used. No harmony is incorporated, although sometimes many people sing at the same time, and other times the vocals are solo. Native American vocals are passionate, used to summon spirits, ask for rain, or to heal the sick. Many researchers think Native American music is one of the most complex ever performed. The tensioning and release of vocals combined with drum beats make it a very intricate art form.”

In Ancient Egypt, seven vowels served as sacred sounds, creating a harmonic convergence. In addition to the human voice, the egyptian high priestess played the “sistro” in the ceremonies, a kind of rattle with metal discs that generated an “ultrasound” to intensify the healing, and which is still used today. The ancient Egyptians believed so strongly in the power and sanctity of sound that there were no vowels present in their written language of hieroglyphics.

Ancient Greece gave rise to what we call music therapy. Pythagoras, who many know as the father of mathematics and the founder of the Pythagoras School of Mysteries, is believed to have discovered the musical intervals and established the musical notes we use to this day.

Pythagoras wrote: “every celestial body, in fact every atom, produces a certain sound because of its movement, its rhythm, or vibration. All these sounds and vibrations form a universal harmony in which each element, although it has its own function and character, contributes to the whole.”

Similar to the ancient Egyptians, the ancient Greeks also built healing chambers designed for the “sleep of dreams”, which incorporated the therapeutic use of reverberant surfaces and parallel stone walls, as well as musical instruments.

Singing is also prominent in ancient Chinese and Tibetan cultures, with intricate variations to positively impact physical well-being, psychological health and spiritual dominance. In addition to the human voice, Tibetan bowls have been used for centuries to heal and stimulate brainwaves and are compared to the “Sound of the Universe”. Finally, Tibetan gongs can cover the entire audible sound spectrum, considered to have a positive effect on overall health.

The 16th century German musician and scientist Ernst Chladni discovered that geometric patterns could be made by striking a violin bow against a brass plate filled with sand, this was one of the most important landmarks in the field of acoustics that became known as “Figures of Chladni”.

Leonardo Da Vinci also observed and wrote about dust that created specific shapes depending on vibrational levels: “When a table is struck in different places, the dust that is on it is reduced to various forms of hills and tiny hills”, and Galileo Galilei wrote about using a chisel to scrape a brass plate and observe a long row of thin, parallel and equidistant stripes from each other, which he believed were caused by sound vibrations.

The Rosslyn Chapel, built in the 15th century in Scotland, features the “Rosslyn Cubes”, geometric designs placed all over the chapel ceiling that resemble the Figures of Chladni and led many to believe that ancient sounds were in fact inscribed directly in the chapel.

In the 20th and 21st centuries, the fascination with sound technology continued. As reported by dr. Kathy J. Forti: “Nikola Tesla experimented with acoustic sound waves that started an earthquake in his lab building in New York City. He told how the beams of the building began to tremble as if its molecular structure was being affected.”

More recently, acoustic engineer John Stuart Reid conducted sciatic research at the Great Pyramid in 1997, which studied the resonant and healing effects of granite, the material used to build sarcophagi.

It is believed that sonic reverberation or levitation was used to build places of worship and burial, such as the pyramids. Abul Hasan Ali Al-Masudi, a 10th-century Arab geographer and historian, wrote about a “magic papyrus” with certain symbols inscribed and that when placed under a rock and hit by a metal rod, it created a vibrational movement of stone levitation.

Modern accounts of Tibetan monks who use their deep corners and sacred instruments to move stones seem to confirm the belief that the power of sound, amplified by a large number of people, can create a vibration powerful enough to latvert large and heavy objects.

The Swedish engineer Olaf Alexanderson wrote about the account of an eyewitness in which “Priests of the Far East were able to lift heavy stones from high mountains with the help of groups of various sounds. Knowledge of the various vibrations in the audible track demonstrates to a physics scientist that a vibrant and condensed sound field can negate the power of gravitation.”

According to researcher Stephen Wagner: “in almost all ancient cultures where megaliths exist, there is also a legend that the enormous stones were moved by acoustic means, whether by ‘enchantments’ sung by magicians, by music, striking with a ‘magic wand’ to produce acoustic resonance or by instruments with trumpets, gongs, lyres, plates or whistles”.