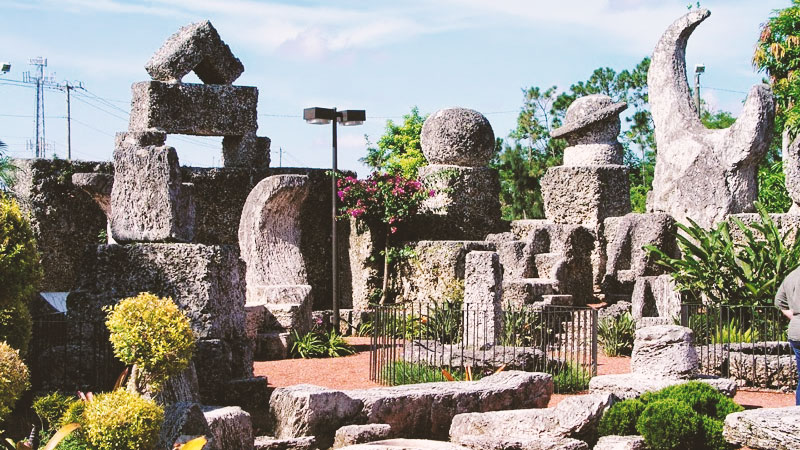 When we think of the innovators in the fields of engineering and electromagnetism, Nikola Tesla’s genius usually comes to mind, but rarely the name Edward Leedskalnin is mentioned.

This was a man who, a few decades ago, built the “Coral Castle” alone, one of the most fascinating places in the world, claiming to know the secrets and techniques used by the Ancient Egyptians to build the pyramids.

Leedskalnin’s story is strange and he did his best to maintain a legacy of mystery through cryptic messages, symbols and tips in his work.

It all started when Ed immigrated to the United States from Latvia in 1912, at the age of 26, leaving behind his fiancée Agnes Skuvst, who abandoned him on the eve of the wedding.

Upon moving to the United States, Leedskalnin suffered from tuberculosis and was told that he had only a few months to live, but recovered with the help of a local doctor.

Revitalized, he bought land in the Florida city on a limestone coral bed more than a mile thick under a thin layer of surface soil, and began building a truly magical castle in memory of his lost love.

Ed Leedskalnin called the site “Rock Gate Park” due to the huge 9-ton stone block that was used as a gate, incredibly designed so that even a child could open it effortlessly.

Erected entirely of stones that Leedskalnin extracted, cut and sat alone, the castle is built with gigantic stone blocks, some of which weigh up to 30 tons and which total 1100 tons.

In 1936, Leedskalnin moved and rebuilt the entire castle structure in Homestead, a nearby town, and for this he hired a truck with a driver to transport the stones. Always intending to protect his secret, Leedskalnin insisted that the driver leave his truck at the scene at night, so that he himself could carry the huge stones. The driver doubted his statement, but the next day found the truck loaded with the stones, ready for transport.

Over nearly 30 years of solitary work, just with the help of basic and simple tools, available for its modest features, and some others designed by Edward himself, such as a chain carving made of old telephone poles, coral castle has become a reality, its interior is an exhibition of exquisite art and engineering wonders. Sets of tables and chairs decorate the coral garden, while stairs and sunwatches are adjusted with minute precision providing a testament to Leedskalnin’s fascinating abilities.

How was Coral Castle Built?

Instead of sharing his mysterious methods of construction with the world, Leedskalnin made every effort to protect the secret behind his feats of moving stones. Many speculated about his process, but no one was able to recreate the seemingly easy movement of such large stones.

Leedskalnin had a fascination with magnetism and developed an interesting worldview based on it. In addition to creating Coral Castle, he published several pamphlets describing a universal theory of electromagnetism and how it related to life on Earth.

He believed that almost all the functions of life could be reduced to the interaction between the north and south poles of the Earth and tiny magnets contained in atoms, which are present in our bodies and in all the organisms of the Earth.

This led many to speculate that Leedskalnin used some sort of magnetic levitation or MRI to levitate the incredibly dense coral rocks while building his park, although the subject was highly debated.

While many point to images showing leedskalnin’s use of pulleys and simple levers, others remain skeptical. He stated that he had a strong understanding of the laws of weight and leverage, although it is difficult to imagine a thin and short-statured person hoisting blocks from 30 tons to 6 meters high, totally unaided.

“I discovered the secrets of the pyramids and how the Egyptians and the ancient builders around the world, with only primitive tools, erected and put in place blocks of stone weighing many tons!”, said Ed Leedskalnin.

To add to the mystery, in a chamber under Coral Castle were found numerous traces of an electromagnetic device, wires wrapped in bottles and strange objects with magnets and chains, appearing to resemble a generator of some kind. Beside this generator, two long metal poles extend under the ground, similar to the anode and thuml in a battery.

In the middle of the device is a steering wheel made of concrete and magnets shaped like a four-leaf clover. Many believe that this was a device of perpetual movement, based on statements from the pamphlet “Magnetic Currents of Leedskalnin”. When a compass is approximated to the device, the needle rotates, indicating that the magnets are positioned in reverse polarity.

Other features of the castle show that Leedskalnin had a strong mastery of astronomy. A “telescope” called Polaris, built with coral rock, aligns with the star of the same name through a crosshair constructed with a metal wire. Although the “telescope” is simply a hole drilled into the rock, its alignment is precise, adding to sunwatches and other primitive forms of celestial measuring devices that Leedskalnin designed with the greatest precision.

In 1986, more than 30 years after Leedskalnin’s death, the 9-ton gate at the entrance to Coral Castle stopped spinning as easily as before. A team of six men and a 20-ton crane were brought in to remove, inspect and repair the gate.

It quickly became clear that Leedskalnin had made a perfectly round hole in the center of the slab without the use of power tools, fixing a metal pole between two truck bearings. However, despite all the technology applied in the repair, the team was not able to make the gate open with the same precision as before.

Coral Castle is officially considered a historical monument and has been transformed into an open museum for everyone to marvel at this incredible creation and for the curious to try to unravel the mysteries of its eccentric builder, but perhaps the mysteries of this building can remain a secret forever.