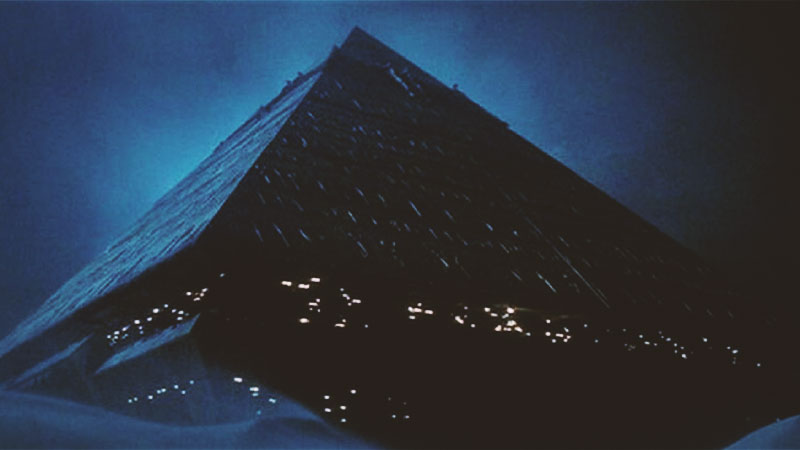 Since its discovery in the last century, a series of cover-ups have attempted to hide a real find, possibly of extraterrestrial origin or from a human civilization still unknown.

The discovery of the Alaska Pyramid was made while China conducted an underground nuclear test on May 22, 1992 under the northwest Chinese desert at LonPor.

Initially, it was believed to have been a major earthquake, but geologists took advantage of the seismographic detonation to do a study of the Earth’s crust and found a pyramidstructure much larger than the Great Pyramid of Egypt near Mount McKinley in Alaska.

Despite its supposedly ancient provenance, evidence of the existence of the Black Pyramid did not appear until July 26, 2012, when experienced journalist and ufology expert Linda Moulton Howe announced her discovery on the Coast to Coast AM radio show.

Linda Moulton Howe presented a report that highlighted that the area known as the “Alaska Triangle” is a missing zone for ships, planes and people, and an estimated 18,000 people have disappeared since 1988.

That night during the show, Linda Moulton Howe broadcast a pre-recorded interview with Doug Mutschler, a retired U.S. Army counterintelligence officer, who described the events that occurred in relation to the discovery of the pyramid and revealed the connection between the site and the U.S. military.

Mutschler was transferred from Alaska to Fort Meade, the headquarters of the NSA, where he was able to verify that the confidential files confirmed the pyramid’s history. According to Mutschler:

He said, ‘Well, if we have it, it could be in containers X, Y or Z.’ So I went over there and I was just looking around and couldn’t find anything that mentioned a pyramid, but I took some files about Alaska from two different vaults. I had just sat down and then two individuals came and said to me, ‘Hey, you don’t need to know this information.‘”

Mutschler recalls that a local NBC affiliate published a story announcing the discovery of the structure about 6 months after the detonation, but when he tried to contact the station to get a copy of the story, they denied that it had been published and stated that they certainly did not have a copy to provide.

The morning after Linda Moulton Howe’s interview with Mutschler, however, things got very strange. The son of a retired Western Electric engineer contacted her to confirm the fundamentals of Mutschler’s claims and to add several new pieces to the puzzle.

Howe’s new source claimed that his father had worked on a powerful electrical system from a very large underground pyramid of unknown origin in Alaska between 1959 and 1961, and according to the new witness’s accounts:

“After the war, my father majored in electrical and physical engineering and after finishing college, he was recruited by the military to join a group of other experts to study and work in an underground structure in Alaska that, in his words, they called the ‘Black Pyramid’. He spoke several times about the seriousness with which the government took this project and the steps they took to keep it a secret. I always thought it was a military facility, but he told me it was a study on energy distribution. He became AT&T’s leading information provider, which was obviously the forerunner of the web and cell phone technology we all know today.

In his later years, he always complained when he got his electricity bill, saying it could be free if we knew the truth. Now I’m starting to think he knew a lot more than we thought. I’m reviewing your studies and old papers to see if there’s any reference to your time in Alaska. There may be no information, since he said everything was classified material. If this pyramid supposedly found in 1992 is true, our government may have known about it long before that and took extensive steps to keep it hidden.”

According to Linda Moulton Howe, the pyramid is located about 80 miles southwest of Mount McKinley and it has been reported that the object is apparently very old, probably built and buried by a very advanced and unknown civilization to this day. It was named “Black Pyramid” and has since been heavily guarded by the United States Army and a private military group that controls access to the site.