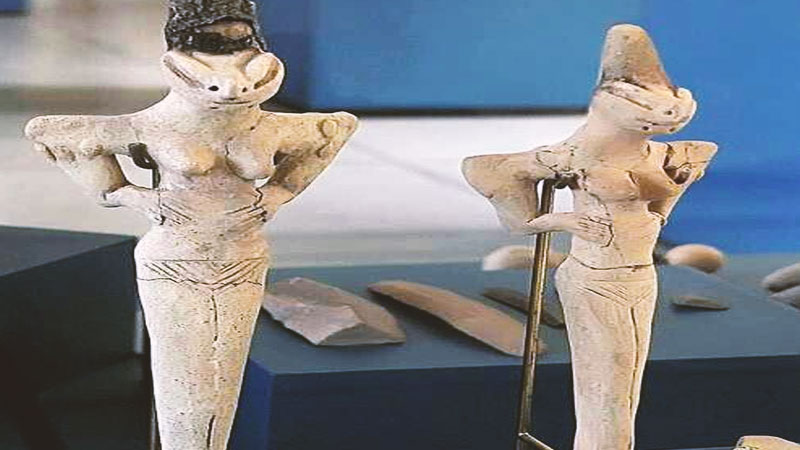 At the archaeological site of Al Ubaid, west of the city of Ur, in present-day Iraq, many pre-Sumerian artifacts dating back more than 7,000 years have been discovered and some of them depict humanoid figures with lizard-like features.

Now the question is whether these images are of mythical figures or of real beings who may still be living among us.

The Ubaid period is a particular prehistoric era of Mesopotamia dating between 6500 and 3800 BC, and during this period villages began to emerge where early peoples used irrigation to cultivate the land and fished in the rivers and in the Persian Gulf.

The period is much older than what historians have accepted as the beginning of the civilization associated with ancient Sumer. The Sumerians are considered by scholars to be the creators of civilization sometime between 4500 and 4000 BC.

The Al Ubaid archaeological site was first excavated in 1919 by archaeologist Harry Reginald Hal, where male and female figurines were found in different postures and in most figurines they appear to be wearing a type of helmet and have some sort of padding on their shoulders.

According to the Metropolitan Museum of Art, the people of the Ubaid region left behind “baked clay figurines, mostly female, decorated with painted or appliqué ornaments and lizard heads.”

Other figurines were found holding a staff or scepter, possibly as a symbol of justice and government. Each figurine has a different pose, but the strangest of all is that some female figurines are breastfeeding babies also represented as a lizard-like creature.

The reptilian shape used for these figures has baffled many researchers and has also led many to speculate that the lizard-headed figures may represent alien beings.

Lizardmen, reptilians, humanoid lizards, and other similar nicknames have been applied to these beings who possess distinct reptilian characteristics combined with human-like traits.

Ancient Astronaut Theorists believe these creatures are shape-shifting humanoid aliens and some speculate that they possess the power to control the world from underground bases and are related to most world leaders who are bent on carrying out a nefarious agenda.

Researcher David Icke has been an proponent of the theory that a race of reptilian extraterrestrials has been manipulating humanity since ancient times on a global level.

Icke’s theory comes from interpretations of Gnostic texts, including the Nag Hammadi, as well as biblical Apocrypha, such as the Dead Sea Scrolls. He says he believes these texts contain evidence that certain higher vibrational-frequency beings known as Archons appear on Earth as humans, masking their true reptilian form and are undoubtedly evil, intent on enslaving humanity for their own selfish reasons.

Before you think the idea of lizard humanoids is impossible, consider the theory of geologist and paleontologist Dale Russell, Professor at the Department of Marine Earth and Atmospheric Sciences at North Carolina State University and a Senior Paleontologist at the North Carolina Museum of Natural Sciences: an interesting thought experiment based on the possibility that dinosaurs may have, at least in part, survived extinction and the remnants of this species may have evolved into highly intelligent life forms.

In 1982, Dr. Russell proposed his “dinosauroid” theory after studying a prehistoric animal known as the Troodon. These animals measured around 2 meters long and weighed about 27 kg, had large eyes with binocular-like vision and abnormally large brains with superior intelligence. In addition, these creatures had free-working fingers and the ability to grasp objects with their hands.

Russell suggested that the species could have evolved over millions of years into human-like creatures.

And now, historical evidence, such as artifacts from the Ubaid period and other ancient sites, comes to support what have long been ignored or dismissed as legends, myths, and metaphorical or primitive ideas.

As more evidence emerges, perhaps we will finally be able to parse myth from modern reality and the “reptilian gods” from art that is imitating life.