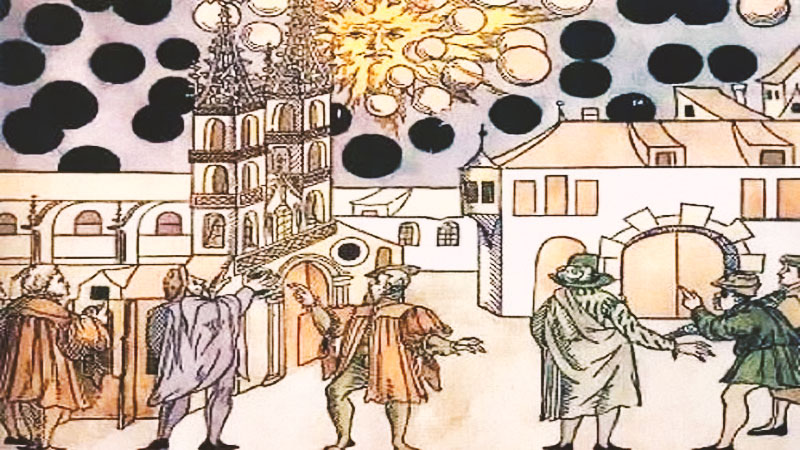 Early in the morning of April 4, 1561, residents of the city of Nuremberg, present-day Germany, saw what was described as an aerial battle between strange flying objects floating across the sky leaving steam trails while firing “spears” at each other.

The combat was followed by the appearance of a large black triangular object that fell outside the city and, according to many eyewitnesses, there were hundreds of objects described as spheres, cylinders and crosses.

The Nuremberg Gazette, a journal of great circulation at the time, reported the event in its April 14, 1561 issue, and described what happened in a textual and graphic way, recounting the story from descriptions of eyewitnesses and illustrated with a woodcut by the artist Hans Glaser.

One of the remaining originals of this edition of the Nuremberg Gazette is archived in the collection of the Central Library of Zurich, Switzerland.

The newspaper describes the battle between objects of various shapes, including high-speed flying crosses, balloons, cigar-shaped tubes that were opened to release other spherical objects that swept the sky, two crescent-shaped objects, and subsequently a huge black triangle similar to a spearhead.

The Nuremberg Gazette refers to the event as a “terrifying apparition that filled the morning sky with cylindrical shapes, from which emerged black, red, orange, blue and white spheres that flew everywhere”, and that “the frightening spectacle was witnessed by countless men and women”.

The event reportedly lasted about an hour and ended when “a black triangle in the shape of a spear appeared and then the globes and cigar-shaped objects flew into the sun”, reporting that several of the other objects fell to earth, disappearing amid a large cloud of smoke.

The simple and seemingly meaningless descriptions can easily be explained by the lack of technological reference of the Nuremberg population of the 16th century, who did their best in trying to describe and understand what they were seeing.

The deeply religious people of Nuremberg assumed that they were seeing a divine conflict between angels and demons, and similarly, similar accounts are found in the Vedas, the Hindu sacred texts written more than 4,000 years ago, describing similar battles taking place in the skies of India between the “gods” flying in their Vimanas, the “flying carriages”.

The mechanical flight had not yet been invented and would only be accessible to humans about 350 years later and therefore the jet propulsion systems and high-powered weapons they witnessed could only be described in primitive terms, based on their knowledge of what it seemed.

However, for us in the 21st century, we understood that they were actually witnessing a battle between alien ships, since they could not be human aircraft, which used technology that was far beyond people’s comprehension capacity in 1561.

The round objects described are probably the same type of artifacts that we call UFOs and that have been sighted and documented for thousands of years. The large black triangle is possibly a type of “mothership” that would have shot down enemy ships, and the crosses were probably similar flying artifacts in design to what we now call fighter jets.

Faced with evidence as compelling as this, we can only confirm once again that the UFO phenomenon is real and has been present on our planet for a long time, even long before the Battle of Nuremberg.