Início English What Was the Manna Machine? 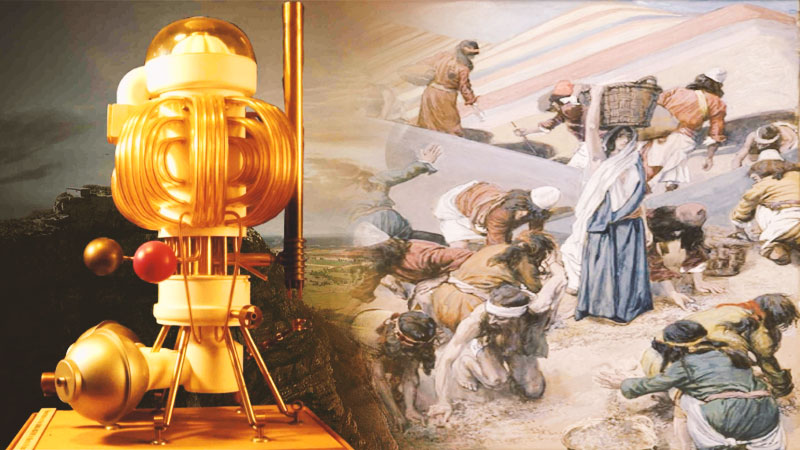 The Bible describes how the Israelites left Egypt in search of the Promised Land and had to cross the Sinai desert. As there were a lot of people and little vegetation, as it was a desert, food was scarce. Then God intervened and sent “Manna” from heaven.

In the book of Exodus, it is written that the manna was “a thin, flake-like thing” similar to frost, which appeared every morning after the evaporation of the dew formed during the dawn and had to be collected before the heat of the sun melted it, then ground, boiled or baked as bread that tasted similar to honey.

According to the Bible, manna was sent daily and could not be stored for another day. It was also not provided on Saturdays, so God sent more on Fridays, in which case the manna could be kept for the Sabbath without spoiling.

According to a theory spawned by modern science, the manna machine provided a very nutritious form of green algae as a food source.

Chlorella green algae can be grown in tanks and fed to people who live indoors, like astronauts. The analyzes also showed that human life can be maintained for long periods with just the consumption of chlorella algae.

There is no detailed description in the Bible, but another ancient Jewish text provides more clues. The Zohar describes something called “The Ancient of Days” as being what provided the manna.

“The text speaks of brains of different sizes and faces of different sizes, which connect with different tubes. And there were different sources of light. When I deal with it from a modern perspective, what is described in the Zohar is not necessarily a divine figure, but rather, a type of machine. A machine that somehow produced manna, a mysterious food source that numerous historical accounts suggest was real,” says Ancient Astronaut theorist Giorgio Tsoukalos.

In 1978, engineer George Sassoon and researcher Rodney Dale, following descriptions of the Zohar, managed to reproduce a similar machine and claimed that it produced an algae-based food source.

The machine captured the humid morning air and condensed it into the dome-like part of the machine. Then, the energy produced by a small nuclear reactor provided the heat and light needed to accelerate the growth of the microscopic algae contained in the moisture.

“Of course, the machine needed energy to grow the algae, and that was produced, we postulate, by a small nuclear reactor,” says Rodney Dale.

Theorists suspect that the nuclear reactor powering the Israeli manna machine could be the Ark of the Covenant.

“There are several reports in the Bible that state that if a person approached the Ark of the Covenant and did not know how to operate it, would be immediately killed. And many times, after approaching the ark, people began to lose their nails and hair. This is evidence of radiation poisoning that was directly related to the Ark of the Covenant. Therefore, the Ark of the Covenant housed the extraterrestrial equipment that was given to the Israelites during the 40 years they wandered by the desert,” says researcher Giorgio Tsoukalos.

The Manna Machine theory offers two explanations for where the Israelites could have obtained it. One suggests that they could have stolen the device from the Egyptians before their exodus, which does not explain its construction. But for Ancient Astronaut Theorists it would be unlikely that this device could have been built on Earth with the limited technology of the time, which suggests that the machine could have been created by extraterrestrials and given to the Israelites to keep them from starving during their journey to the Promised Land across the Sinai desert.

Researchers believe they could be representations of extraterrestrial beings that visited humanity in the past.