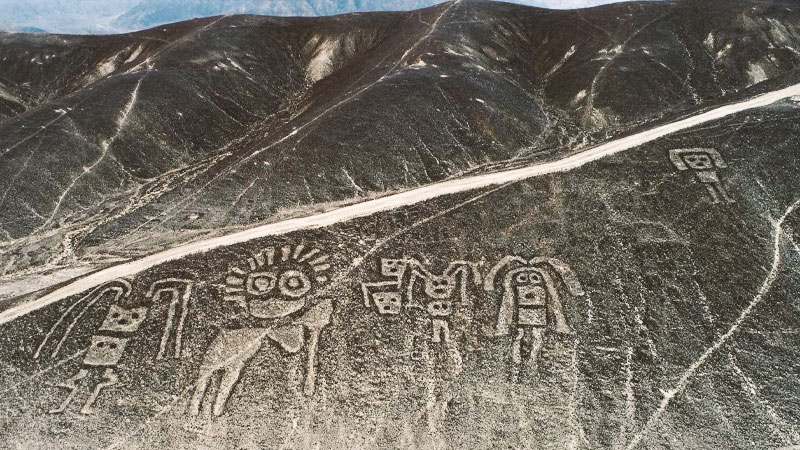 Nazca is located in Peru, on an arid plateau in the desert near the Pacific coast between the Ica and Nazca Grande rivers, and the ancient Civilization of the Nazcans arose just over 2,000 years ago, existing between 100 BC and 800 AD and have some fascinating and mysterious features.

The ancient Inhabitants of Nazca are considered strongly influenced and possibly even descendants of the Paracas civilization before them.

The Nazcans originally consisted of a collective of heads and agricultural villages around a common area, known as Cahuachi, where they made pilgrimages for rituals and ceremonies. Eventually they grew up in a larger society with large urban cities and advanced agricultural technology.

Known for their pottery and weaving, the Nazcans decorated their artifacts with geometric patterns, plants and animals that resembled the Nazca Lines, the huge and curious geoglyphs for which they became known.

Its advanced underground irrigation systems, called “puquios”, which used atmospheric pressure to pump water into their plantations, are proof of their advanced level of technology.

In the center of Nazca was Cahuachi, a city that stretches for 1.5 square kilometers and has a pyramid of steps almost 30 meters high, which made it the largest ceremonial center of its time, but originally thought to be some kind of installation or military base.

This theory was overturned thanks to research by italian archaeologist Giuseppe Orefici, who has been studying the site for years. In addition to studying the mysteries of ancient Nazca, Orefici also spent much of his career studying the Rapa Nui civilization on the enigmatic Easter Island.

Giuseppe Orefici concluded that Cahuachi was a ritual center and the capital where the Nazcans regularly made their pilgrimages for ceremonies.

In addition to the great pyramid, there are another 40 structures made of clay, and within them are thousands of tombs that have only been discovered recently, and since then, unfortunately, has been ransed by grave robbers.

In the tombs of Cahuachi were found a series of bodies, many well preserved due to the mummification process, and dressed with varied fabrics, showing different levels of social status. Some heads were also found with holes drilled in the skulls, and apparently had the purpose of “war trophies”.

The Mummies of Nazca

In the spring of 2017, researchers began scientific research into the origins of six three-toe mummies and elongated heads found in Nazca.

Preliminary results of tests performed on the anomalous hands of the larger mummy revealed no evidence to indicate a fraud. Scientists discovered that she was female and called her Maria, and carbon dating indicated that she was about 1,700 years old.

But the most surprising is that the mummy is similar to humans only in part. According to the analyses, the mummy Maria has 98.5% of the genes equal to those of primates, such as humans, and the other 1.5% are unknown.

Maria also has a large mutation in her genes that cannot be classified into any known category, which may indicate that she would belong to a previously unknown primate species or that she could be a hybrid between the human race and an extraterrestrial race.

Outside Cahuachi, there are the magnificent geoglyphs known as the Nazca Lines, which can only be seen hundreds of metres high. They were not discovered until the 1920s, when the first airlines began to fly over the Desert of Peru and noticed them.

The Nazca civilization created these lines by removing a layer of rock and dust, probably tying ropes between two poles, drawing guidelines for themselves. The remains of these poles have been discovered, confirming this theory, however, his method for creating such large drawings with such precise measures and proportions still remains a mystery.

The lines extend over 500 square kilometers and consist of designs of flora, fauna and geometric patterns that have been preserved thanks to the arid and windless climate of the region.

Among the 70 different zoomlines, there are representations ranging from monkeys to birds and jaguars. There is even a human-looking figure who has been the subject of debate about what exactly it stands for. Some see him as an ancient astronaut and these lines would be a call to extraterrestrial visitors.

Conventional archaeology offers some explanations for the Nazca Lines. One theory believes that they are ritual paths of the processions that the ancient Nazcans would follow during their pilgrimages. Another theory sees them as markers of irrigation paths or actual irrigation channels with their projects being a thank you to the gods for fertility. And a simpler explanation sees them as part of an astrological calendar.

For Ancient Astronaut Theorists, such as Erich von Däniken, the Nazca Lines are interpreted as a landing guide for extraterrestrials, and although this suggestion may seem unfounded to some, none of the theories of traditional archaeology have been proven.

The idea that the lines represented irrigation systems seems strange in their eccentricity, especially considering their elaborate system of underground aqueducts. Another obscure theory postulates that nazcans had the technological acumen to create hot air balloons, allowing them to see the drawings they created.

In any case, Nazca’s culture and its enigmatic lines still remain unexplained, and recent discoveries in Peru have only served to further enhance its mysteries.