Início English The Mysterious Structures Hidden Under the Sahara Desert 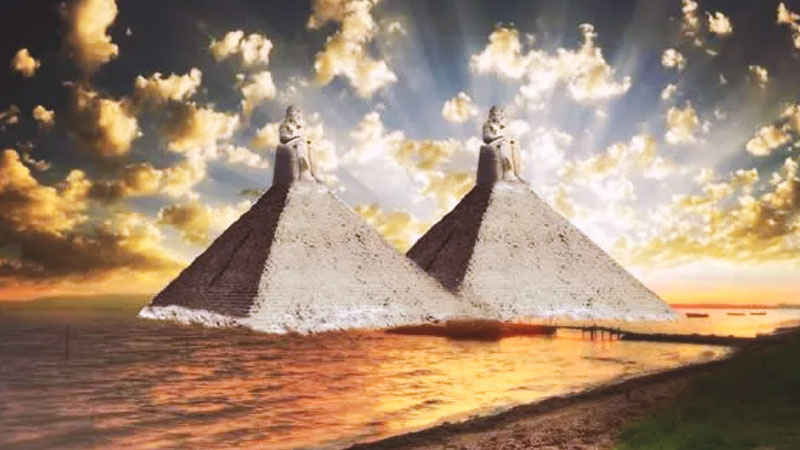 The Great Flood is a controversial topic among scientists, but there are those who are convinced that our planet was flooded in the distant past, destroying entire civilizations.

The story of the Great Flood is commonly associated with the Bible, but similar accounts exist in virtually every ancestral culture all around the world.

The oldest written record of this story dates back over 4,000 years and is one of the earliest known works of world literature, The Epic of Gilgamesh, a Sumerian epic poem that chronicles the adventures of the legendary King of Uruk.

During his journey in search of immortality, Gilgamesh meets Utnapishtim who tells him the story that long ago the gods had told him that they would flood the world, so Enki instructed him to build a ship, called “The Preserver of Life”, to carry all the seeds of life in it.

Utnapishtim was tasked with bringing his wife, family and relatives along with his village’s artisans, animals and grain. The approaching flood would wipe out all animals and humans who were not on the ship. After twelve days on the water, Utnapishtim opened the hatch of his ship to look around and saw the slopes of Mount Nisir, where his ship ran aground.

Ancient Structures in the Sahara Desert

Angela Micol is founder of the Satellite Archeology Foundation, an institution that searches for archaeological discoveries using the technology of satellite imagery, and has recently found evidence that suggests the existence of an ancient civilization that disappeared under the sands of the Sahara Desert.

Micol believes the mounds found could be eroded pyramids and other buildings, and it will be necessary to organize a thorough excavation to unravel the mystery.

There is no evidence yet that these remarkable structures are from times before the Great Flood, but we cannot rule out the possibility that their destruction was caused by the flood.

A small expedition team visited the Abu Sidhum site and sent Angela Micol a detailed video of the mounds, showing how they resemble pyramids, and another video showing the discovery of pottery shards in the area that helped confirm that something is buried under the sands of Egypt.

The team used metal detectors and underground cavity detectors that tested positive for the existence of gold, tunnels and cavities within all four pyramidal mounds.

The researchers believe they have identified a temple or dwelling place and a row adjacent to the mounds that may be “mastabas,” the name given to the trapezoidal-shaped tombs of the pharaohs of the early dynasties.

“We found some incredible evidence at the Abu Sidhum site that may be much older than what we know about Egypt. There is a distinct waterline, about 50 feet high, on all four pyramid-like mounds, which point to evidence of erosion by water in the distant past. This could be an incredibly ancient site, predating the Great Flood stories, which will rewrite the history of ancient Egypt. If this site proves to be a pyramid or an artificial construction, it must date back to the predynastic or prehistoric period of ancient Egypt, making it one of the oldest known pyramid complexes in Egypt,” says Angela Micol.

The mysterious piece of aluminum dated 250,000 years ago could be proof that aliens visited Earth in the distant past.